The students recently read Orwell’s prophetic work that criticizes totalitarian government and warns against the power of too much technology. To demonstrate their critical thinking about the text, students chose objects that they felt represented big ideas in the novel and put them on display, along with written commentary related to the book.

Other BCECHS students and staff toured the exhibits as the English IV “museum guides” explained their exhibit. The presenting students also created activities for visitors to participate in to help further their understanding of the themes and events of 1984. Several presenters even donned shirts they had made that featured important quotes from the book. Students who toured the exhibits were able to watch videos about the power of government, write on a graffiti poster, listen to a song featured in the novel, participate in charades, and play games.

“The students enjoyed being able to share their understanding and ideas about a book they really liked with the rest of the school,” said Ormond. “I was impressed by their creativity, as well as the critical thinking they demonstrated through their projects.”

Students enjoyed being able to share their learning with others and had fun exploring the book deeply in a more creative way.

“This project allowed me to use my creativity in a unique way and helped me think about the novel in a different way,” said sophomore Kenyana Smith.

Sophomore Miranda Hollis agrees. “I learned more about the influence ideas from novels can have in real life situations,” added Hollis.

Additionally, student art work inspired by the book was on display during the exhibits. Visitors were treated to art about betrayal, individuality, perception, and power.

Other students in the class also created digital book talks or multimedia presentations about topics they researched related to the novel. 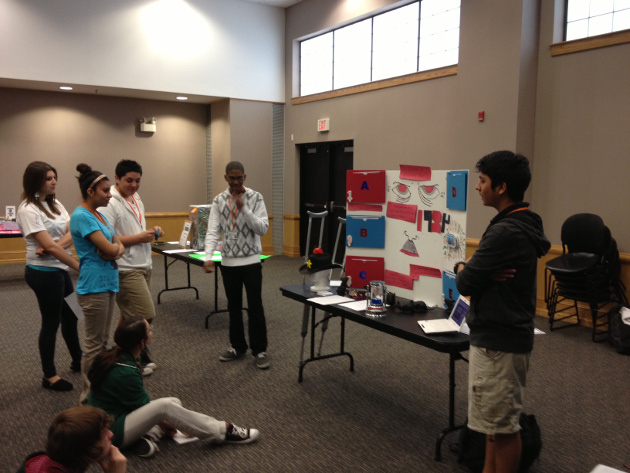 Call/email if you have questions.