Winter's Bone | Eastern North Carolina Now | This is a story that, at first, one may question whether it should even be told. At the end of the film, one realizes that it had to be told, if only to give hope that there can be an unlikely hero.

A Splash of Hope Painted Upon a Bleak Landscape

This is a story that, at first, one may question 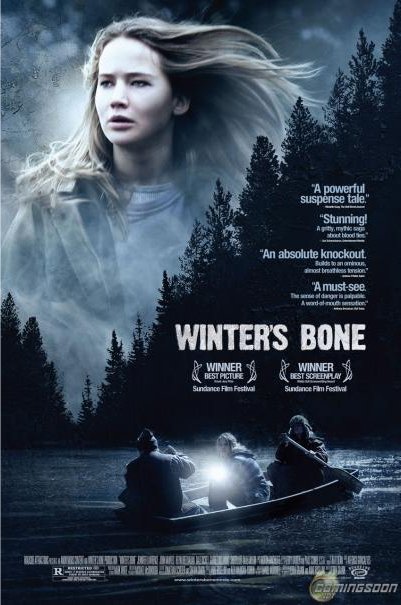 whether it should even be told. At the end of the film, one realizes that it had to be told, if only to give hope that there can be an unlikely hero in most all circumstances. Her family depended on it, whether they realized it or not, and Ree Dolly aimed to deliver come Hell or high water.

Nineteen year old actress Jennifer Lawrence played 17 year old Ree Dolly as if she knew exactly who the poor child was, and who she had to become in order to survive in the foothills of the Missouri Ozark Mountains amid the various tribes of drug making, drug dealing, and drug using White Trash that inhabited the secluded hills and hollows, just north of the Arkansas state line.

Ree was definitely the focal point of the film. She was in almost every scene as she moved deliberately to complete her rounds to sustain and protect her two siblings: Sonny Dolly, played by newcomer Isaiah Stone and Ashlee Dolly, newcomer Ashlee Thompson. Why was she so consumed with taking care of her siblings? The short answer: She was all they had, and unlike her White Trash father and near catatonic mother, she understood what the word obligation meant.

The children's mother was chronically depressed. All of her emotional life had been used up by her drug using, drug dealing, Crystal Methamphetamine cooking, loser husband, who, throughout this film, is lost to the family, and not looking to be found. Papa Dolly is on bail, and had put up his house / land as partial security. When Ree Dolly found out from Sheriff Baskin, played by Garret Dillahunt, that her father was scheduled to be in court for his nefarious drug operations in one week, or they would lose everything, she methodically moves amongst the White Trash tribes searching for her worthless father. The anti-social father could go to jail for all she was concerned, but they would not lose their home, even if it nearly killed Ree Dolly, and it almost did. 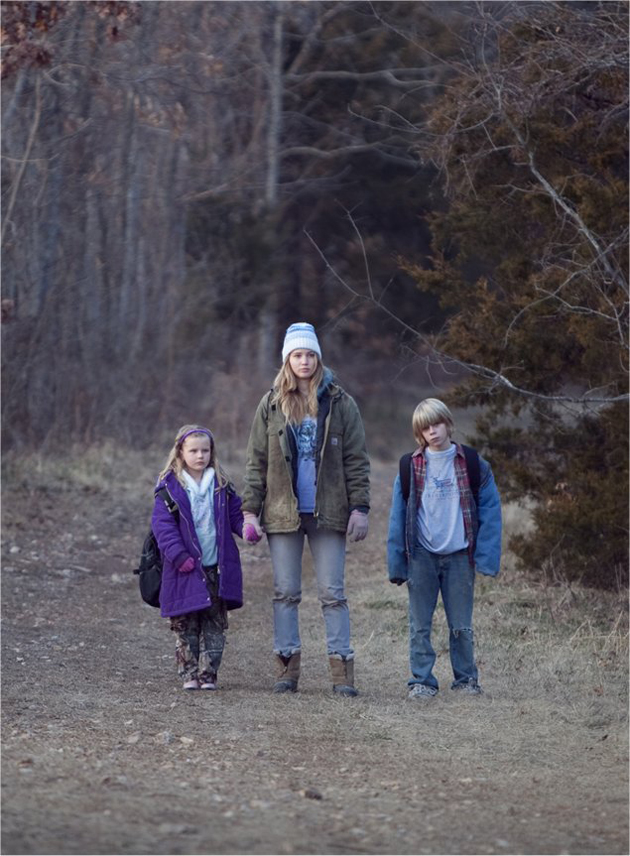 As detached as the estranged father had become, 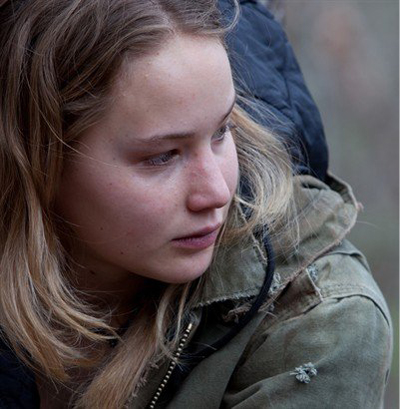 Ree became just as detached about his welfare. Her singleness of purpose became what should have been the duty of the father - to keep their family together.

As Ree sojourned from White Trash enclave to the next, one would think there would be some level of admiration for the child's tenacity, but she got nothing but apathetic ambivalence. Some did not want to get involved, others knew that foul play was afoot, and they knew to steer clear of the sinister nature of those dedicated to the menacing maelstrom that is the society of illicit narcotics, and as depicted in this film, Missouri White Trash is as evil and ambivalent as the Black Gangsta's in the inner cities of the Northeast.

But Ree was not to be deterred and that was the only true uplifting event of this socially despondent film about one of the saddest conditions in America: People who raise children in an environment of ignorance that is so profound that nearly every man and woman are instant qualifiers for membership in the Darwin Awards. If only they could collectively find their way into the winners' category.

Ree's Uncle, the brother of the estranged father, is Teardrop Dolly, played by John Hawkes, who snorts Crystal Meth as if it was the reserve from the family still, finally warms to her condition and provides familial support when her path is at its darkest point. At one point once Teardrop warmed a bit towards Ree Dolly, he asked, "What do you think?"

Ree replied, "You scare me."

Teardrop answered, "That's because your smart." 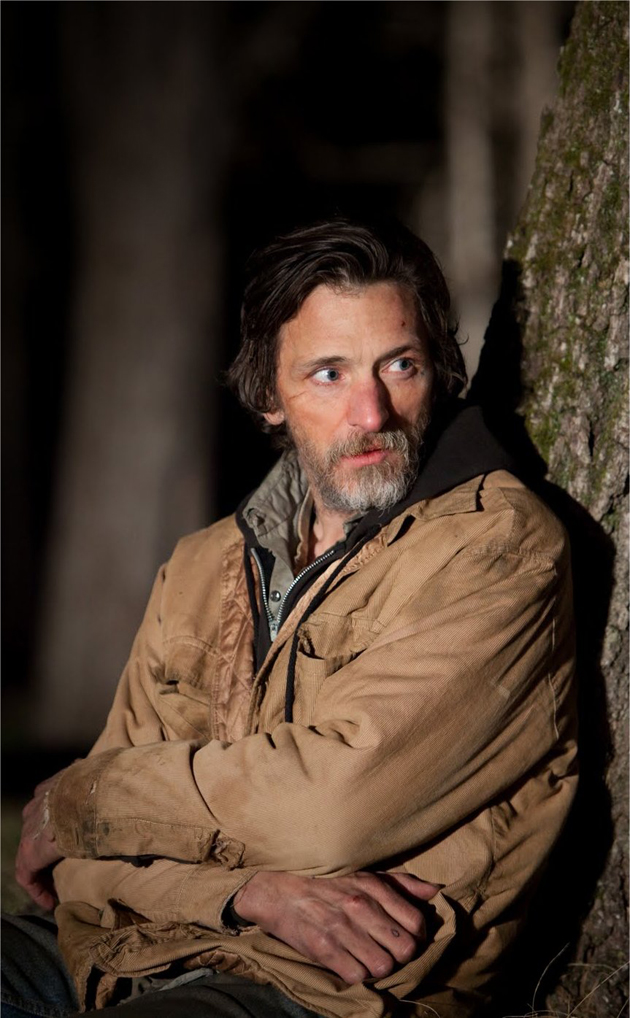 John Hawks as the deeply conflicted Teardrop Dolly: Above.   The one scene that reflects a nearly normal setting is this one where Ree seeks a way to stabilize her sinking ship of a family by joining the Army. The Army recruiter, a total stranger, exhibits the first minute bit of compassion toward Ree from an adult; but still has to inform her that she is only 17, and not of the age of majority, and has no high school diploma. She had to drop out to take care of her family: Below. 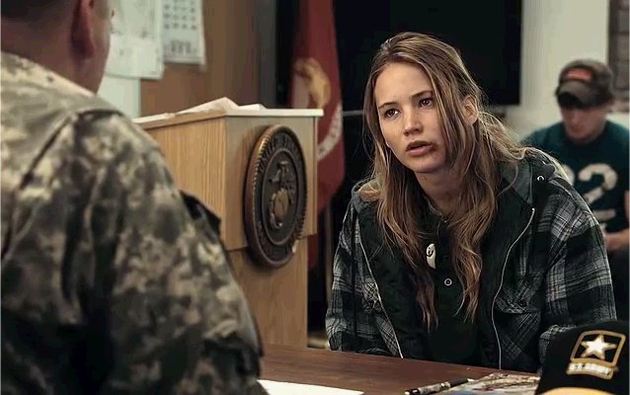 John Hawkes, who has long been a character actor playing small roles in some moderately big films is possibly the biggest name in this small Indie film, directed by virtual unknown dircector, Debra Granik, which had a budget of reportedly 2 million dollars. 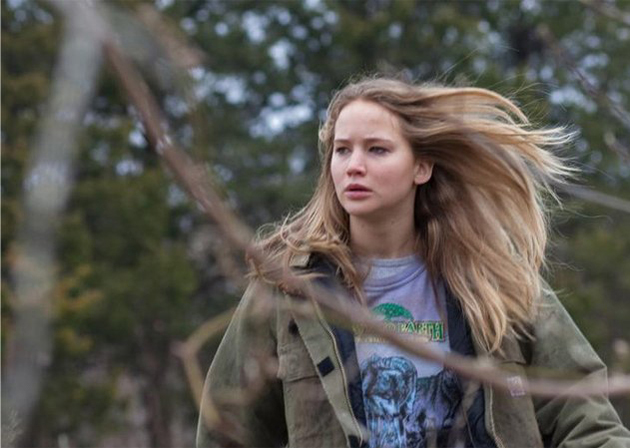 The film, from a novel by Daniel Woodrell with adapted screenplay by Debra Granik and Anne Rosellini, won a host of awards generally bestowed upon the best of the small films, the best of which, often range from watch-able to actually quite good. To stay within the film's paltry budget, and still work, the film needed to set the mood, from which it could make its poignant statement that needed to be convincing. To do that' the lead characters of Ree Dolly, and secondarily, Teardrop Dolly had to keep us convinced. They did, and the film worked in its entire 100 minutes of runtime. 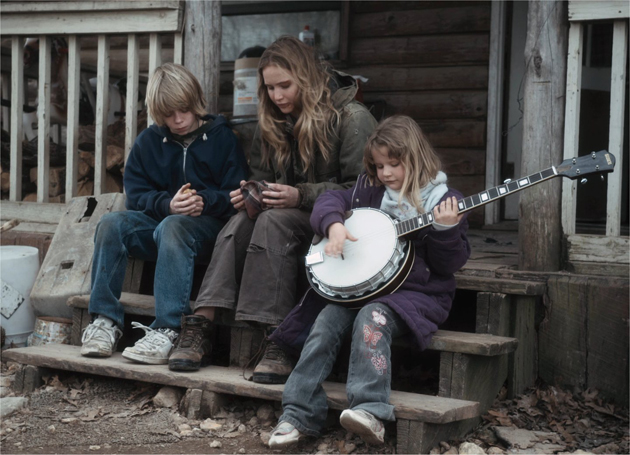 The sad, subtle tones of this dark, sunlight-less film foreboding impending doom, left the audience begging for an outcome that might shine a brief light upon Ree Dolly's predicament, and leave us with some hope that something in their sad world worked. The film did not disappoint, and is recommended for the more unusual film buff, who can take the time to wait a spell for the eventual resolution of minimal hope.