In the Loop | Beaufort County Now | This British Comedy, hailed by some as the best in years, is all talk and little believable substance.

Director Armando Iannucci helped Jesse Armstrong, Simon Blackwell, Tony Roche write the story and subsequent screenplay of the “British Comedy,” “In the Loop” that takes a farcical look at both the British and United States governments as they lead up to going to war against some nondescript country. Ian Martin supplied additional dialogue, but I do believe they used him to write all the lines where the Scottish born British Ministers, or their junior associates, dropped the F bomb. It is chronicled somewhere that Ian Martin had the largest portion of the writing duties.

And sadly, that was probably the best part of the picture: When Peter Capaldi, playing Malcolm Tucker, as a higher level 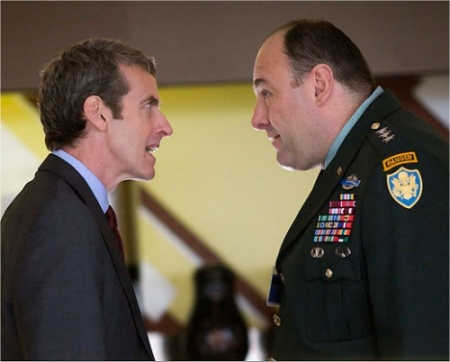 minister closer to the Prime Minister, and Paul Higgins, as James McDonald, would burst onto the scene and severely chastise their more proper speaking under ministers is the harshest, coarsest language I have ever heard; while in complete sentences. Once one receded from the abrupt shock one’s more gentile sensibilities, the juxtaposition of these two juggernauts swearing vehemently, in their extremely thick Scottish accents of their more proper English associates and later at their American contemporaries was the funniest part of the film.

The thing with British comedies: They are built on dialogue and therefore they are very verbose - incessantly so. There is the proverbial dry humor, and moreover, there is often no comedy at all, especially if the context for the comedy is just not constructed. “In the Loop” dealt with an issue, when to go the war with allies, that could be the mother lode of humor if handled perfectly. This production did not.

The British ministers, and under ministers were more concern with their careers, and damn were they wordy about it, than 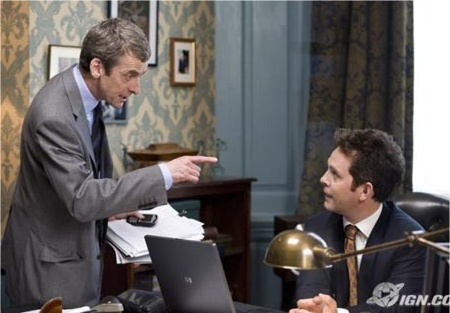 guiding their nation along the proper path. And then again, the creative team for “In the Loop” may have misjudged their government, in as much as the foil for a proper comedy. I do not know that much about the machinations of British governing, and I tend to wonder whether the writing team that built this screenplay understands those machinations as well. For this creative team the hometown Brits are total boobs, and I am not of a mind to entirely buy that; even for this overrated comedy.

The way these creators of this “British Comedy” portrayed the Americans was even more sophomoric. At one juncture near the end of the picture, when the pressure is more palpable, the American undersecretary of the Defense Department, Karen Clark, played by Mimi Kennedy, interacts with military attaché Lt. General James Miller, who has a screaming eagle shoulder patch (101st Airborne), played by James Gandolfini: 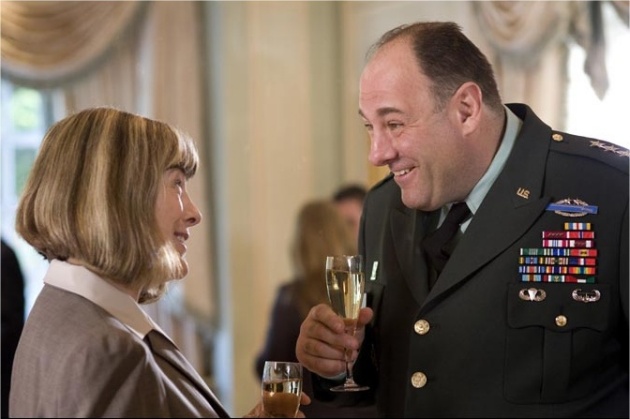 While the dialogue throughout the picture is peppy, and on the surface fairly witty, one must question, however, after considering this earnest conversation with General, who do they (the producers of “In the Loop”) disrespect more: the American military, or the intelligence of a female professional bureaucrat? Either answer, it really doesn’t matter. I could no longer suspend disbelief, due to the outrageous realty within this film serving as a backdrop to the stage upon which comedy must be performed.

There were some bright spots in the picture: the swearing Scotsmen, the acting was serviceable, especially Gandolfini, who has a strong presence and Tom Hollander as Simon Foster, the British career under minister that just can’t “grow a set,” which in any government is a liability. The film was 106 minutes; however, there was enough dialogue for 250 minutes, and enough comedy for 40 minutes. You do the math.