Cold Mountain | Beaufort County Now | Inman is driven toward his inevitable purpose in this love story set against the backdrop of the Civil War in Virginia and North Carolina.

Login to Send a Private Message to Wyatt Sanderman Day
Publisher's note: (updated June 20, 2020) With all the "Woke" whining by Democratic Socialist children, and their petulent chronological adult cohorts, I am drawn today to a real story about a hard time that conditioned our people by a pivotal point in our past to be a better, stronger people. Seeing "Cold Mountain" for about the fourth time was as wonderful an experience as I remembered it to be the last time I sat for this film, and the music is most outstanding, which will always be a hook for me.

As Salmon Struggle to Return to the Place of their Origin ... so Must Inman

Whenever I am drawn into a discussion about whether the film, "Cold Mountain," is better than the novel by 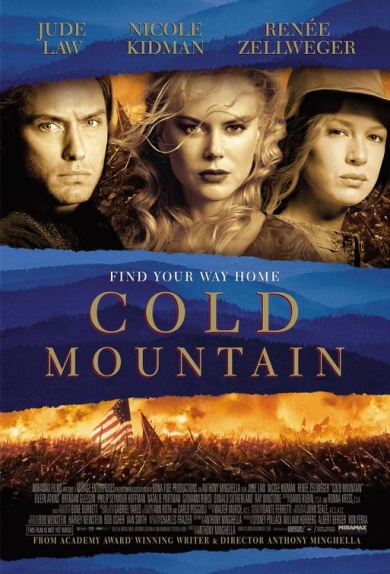 Charles Frazier, the film always loses. That's understandable, considering that Frazier's Cold Mountain is one of the very best examples of great American Literature from the 20th Century, and let's be clear about this one thing: the United States was no slouch in this time period. The prose in this fabulous novel is some of the best ever written as it measures the absolute devotion, that drives one man to the brink of his own demise, as he struggles to rejoin his one true love.

It is a tale of devoted passion, and to what extent the animal instinctual urge to procreate will drive a man to consummate that insatiable need. W.P. Inman, perfectly portrayed by Jude Law, knew he would love Ada Monroe, passionately played by Nicole Kidman, from the first time he knew of her existence in the Cold Mountain community. Ada slowly realizes that she is drawn to the quiet, purposeful Inman, and all seems right in their budding relationship until the War Between the States intervenes.

"Three cheers for North Carolina! Three cheers for the South," could be heard all about the grounds of the community's chapel as their service was interrupted by the announcement of North Carolina's secession from the Union. The ecstatic pronouncements of "We have our war!", and "It will be over in a few months.", would be replaced by the agony of death upon the battlefields and the desperation of want for the many and the neglect of the farms for everyone else. It was the South's darkest hour after over three years of war, and very few of the incredibly ecstatic young men who left the fictional town of Cold Mountain for the adventure of war would not be coming home. 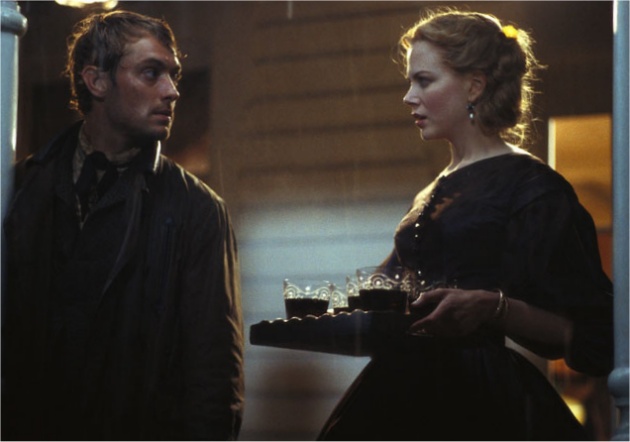 Inman meeting Ada for the second time. She is taken by his humility: Above. The Reverend Monroe and devoted daughter, Ada: Bel
ow. 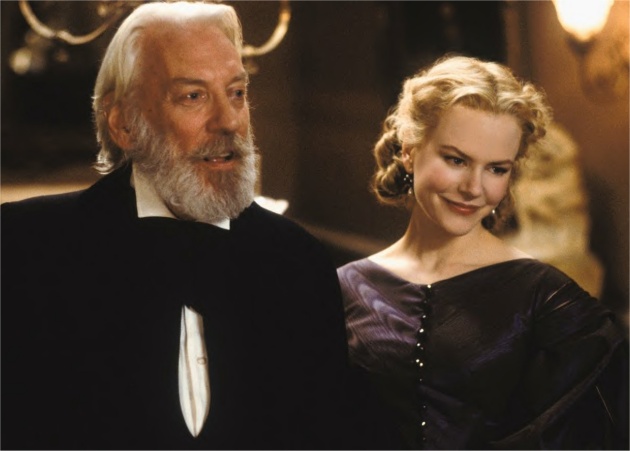 Inman is shot through the neck in a skirmish with Union soldiers, seeking to infiltrate the Southern lines, in the 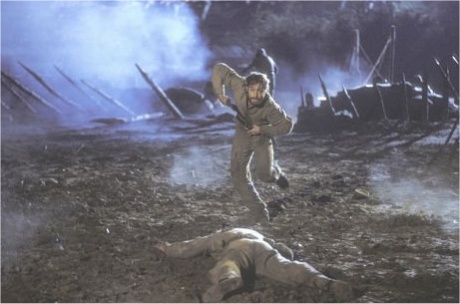 aftermath of the Battle of the Crater during the long siege of Petersburg, Virginia. He nearly dies from his wounds, but, remarkably heals in a Confederate hospital in the tidewater area of southeast Virginia. While convalescing, a long dated letter reaches Inman from Ada explaining her dire predicament after her minister father, played by the versatile Donald Southerland, passes and her life too is as ramshackle a mess as her broken down farm in the gentle valley along the slopes of Cold Mountain. "Come back to me," Ada begs in her letter, and it is as if a long lost key is found to unlock the better part of Inman's battered soul, he takes up his few possessions, turns his back on over three years of service with the Army of Northern Virginia, and walks for Cold Mountain.

Inman crosses into North Carolina and walks nearly the entire length it's coastal plain, from north to south, until 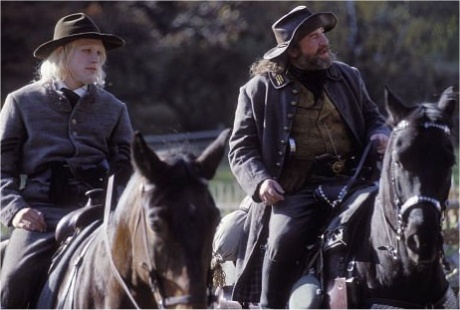 he reaches the mouth of the Cape Fear River in Brunswick County, and at that point, follows its waters from the Atlantic coast, northwest into the heart of his home state, eventually making his way to the Haw River and into the piedmont. Along the way, while avoiding the Home Guard (government sanctioned militia to protect those back home and later to round up and kill, if necessary, deserters), Inman found adversity, hardship, but never detoured from his mission to comfort his one true love.

Along the way in his Odysseus like journey to his home, Inman encounters a disgraced minister, a “white trash” hill family of low scruples that sells him into captivity to the Home Guard, an earthy gypsy woman possessing a crude kindness, a war widow that gives help and whom depends on reciprocation, and eventually the tall snow swept mountains standing shoulder to shoulder with Cold Mountain. Actor Jude Law, as the determined Inman, shares scenes with some of the more accomplished actors in the business with: Philip Seymour Hoffman as the disgraced minister, Giovanni Ribisi as the "White Trash Judas," Natalie Portman as the bereaved war widow and Ray Winstone as Captain Teague, leader of the Cold Mountain Home Guard.

The late director, Anthony Minghella, also wrote the screenplay and wisely kept a measure of Frasier's lyrical prose as 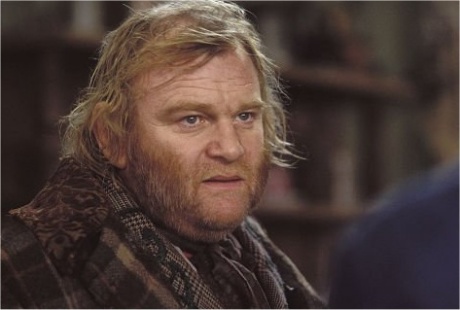 the actors' collective voice, while using the power of his cinematography and one of the most outstanding soundtracks in cinematographic history; featuring the sound of the mountains, coupled with original compositions of Gabriel Yarad, Sting and arrangements of traditional mountain songs by the legendary T. Bone Burnett. Lead vocals include Allison Krause, Jack White and Tim Eriksen. Even Nicole Kidman does her own piano work on "Ada's Song" and Bendan Gleeson as Stobrod, the estranged fiddle playing father of Ruby Thewes, actually plays the fiddle but did not play on the soundtrack.

Director Minghella was wise to choose images and music to present the tale of Inman and Ada's profound love story, against the backdrop of the desperation of a war ravaged south, rather than compete in screen verse with the prose of Charles Frasier. It was a wise move; however, filming much of the film in the Carpathian Mountains of Romania was not. A film that is so ingrained in the culture of such a distinct region and pivotal point in the history of any nation should be filmed as close to where the story would have occurred. The actual Cold Mountain in the Pisgah National Forest would have been a more realistic location. If that general area was good enough for the classic film "Last of the Mohicans," it should work well for a film of the same title. 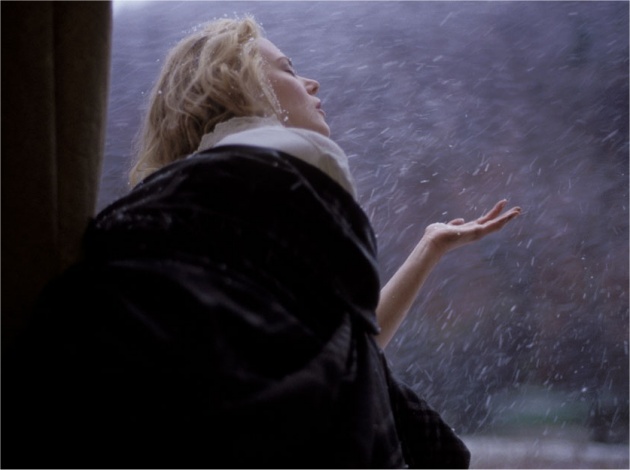 Back at Cold Mountain during Inman's military service, the aforementioned Ruby Thewes, at the urging of Sally Swanger, 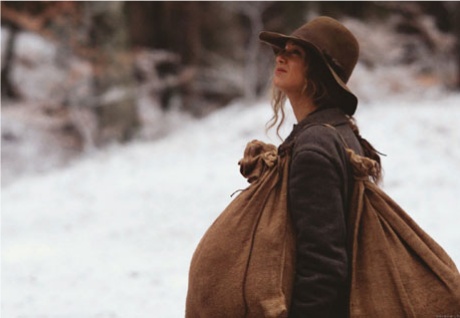 played veteran actor Kathy Baker, becomes Ada's salvation as she manages the degraded farm and Ada herself to a survivable level of productivity. Ruby Thewes is played by the mercurial Rene Zellweger, who also won the Oscar for best Supporting Actor in a female role. It is a fabulous role for any actress, and Rene nailed the no nonsense Ruby, as did every actor hired on for this period story of some of North Carolina's darkest days.

The film, at 154 minutes of runtime, is a short symphony of the South, before a devastating war, during that war and when it was finally over for Inman. Inman was a man that quietly, and with great determination, always did his duty. In the film version of "Cold Mountain," he did not disappoint in this lyrical love story told in song and moving images.