CommenTerry: Volume One | Eastern North Carolina Now | A week before each monthly NC State Board of Education (SBE) meeting, state board staff post an agenda and meeting materials on the board's meeting website.

Published: Friday, December 6th, 2013 @ 11:27 pm
By: John Locke Foundation   ( More Entries )
Publisher's Note: These posts, by Dr. Terry Stoops, and aptly titled CommonTerry, appears courtesy of our friends at the John Locke Foundation. A full account of Dr. Stoops's posts, or him mentioned as a credible source, are listed here in BCN.

A week before each monthly NC State Board of Education (SBE) meeting, state board staff post an agenda and meeting materials on the board's meeting website. In late October, they posted the annual teacher turnover report. My Carolina Journal colleague Dan Way subsequently interviewed Superintendent of Public Instruction June Atkinson, Chairman of the State Board of Education Bill Cobey, and others (including me) about the contents of the report.

During their interviews, neither Atkinson nor Cobey expressed concerns about the report. Nevertheless, shortly after Way's Carolina Journal article appeared at www.CarolinaJournal.com, state education officials pulled the report from the November agenda. It was not clear why.

Although pulling an item from an agenda is not unusual, this was not just any item. Politically, the teacher turnover report is used, incorrectly in my opinion, as an indicator of the ability of the ruling party to satisfy North Carolina's public school teachers. A high turnover rate, for example, would bolster Democrats' claims that Republican policies are driving public school teachers out of the profession. Obviously, teacher turnover is more complex than that formulation suggests, but nobody ever accused politicians or the mainstream media of appreciating the complexity of the teacher labor market.

Now, a new teacher turnover report has been posted on the SBE meeting website for its December meeting, and it is fundamentally different than the report pulled by Atkinson and Cobey in November.

Magically, the December report shows a significant increase in teacher turnover compared to the November edition. The NC Department of Public Instruction (DPI) added around 325 teachers to the turnover rolls between November and December. In addition, DPI reported nearly 1,400 fewer total teachers in December than in November. By increasing the numerator (turnover) and decreasing the denominator (total teachers), DPI increased the turnover rate by 0.5 percent. What was called a "slight" increase in turnover in the November report has been recast as a "significant" increase in this month's report. (See Facts and Stats below.)

While the rate is higher in the December report, the story is the same. Most of the state's teacher turnover falls into two categories -- retirement and teachers moving from one public school position to another.

But it is difficult to trust a report that DPI changed so radically from one month to the next, particularly when those changes reinforce their "Republicans are destroying public education" narrative.

Apparently, state education officials pulled the report over concerns that the data in the report was not accurate. Yet, DPI staff had several months to verify the data in the teacher turnover report. The annual report details the difference in teaching positions from March of the previous year to March of the current year. DPI's Financial and Business Services Division verifies the total turnover with each school district. School district officials confirm the count and assign reasons for the turnover. If DPI staff cannot achieve an accurate turnover count after eight months of work, then perhaps Superintendent Atkinson needs to make major personnel and operational changes to the agency she oversees.

If there were any doubts about the reliability of the data collected and verified over the previous eight months, then why include them in the November agenda in the first place? While state statute mandates that the SBE "monitor the decisions of teachers to leave the teaching profession," it does not require the SBE to approve the report in any particular month. In other words, there was no need to expedite the report for a November release.

Most importantly, why didn't Atkinson or Cobey follow up with Dan Way to explain why they decided to pull the report? As far as I can tell, he was the first and only reporter to write about the November turnover report. I suspect that he would have been happy to write a follow-up report that explained the decision to delay its release.

Simply put, concerns about the reliability of the data, even if valid, are a small part of the story. Either DPI staff spent eight months producing a sloppy, error-filled report that required near complete revision, or they made changes that were more favorable to their ideological narrative. Either way, DPI is clearly at fault and should be held accountable for behavior that, in my opinion, borders on fraud. 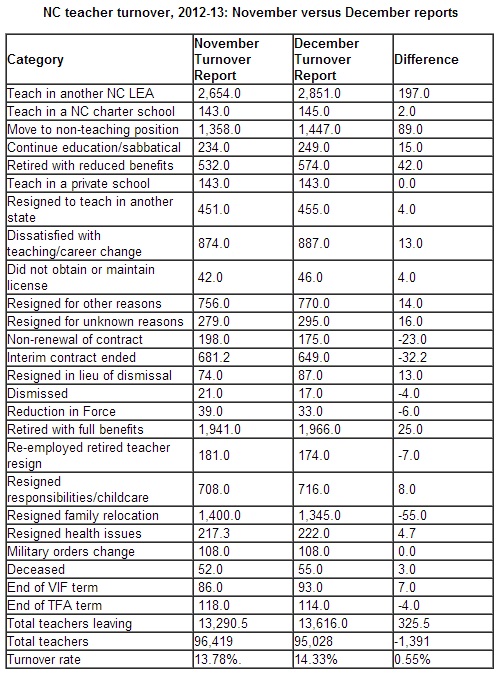