A grant of nearly $500,000 will help East Carolina University recruit and teach school librarians from economically disadvantaged and historically underrepresented backgrounds who want to live and work in eastern North Carolina.

The library science degree program in the College of Education at ECU has been awarded a 2014 Laura Bush 21st Century Librarian Grant from the Institute of Museum and Library Services. ECU will provide $165,045 in non-federal matching funds, bringing the total to $657,369. 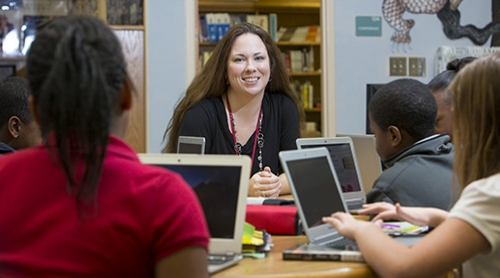 Meredith Hill, an ECU graduate in library science, assists students with computer activities in the library at Creekside Elementary. (Photos by Jay Clark)
"This project will increase the number of trained, professional media specialists that reflect the diversity of their communities and increase the ability to connect with those diverse populations," said Dr. John Harer, master of library science degree coordinator and associate professor of library science in the College of Education.

The funding will support recruitment efforts and full-tuition scholarships at ECU for 30 library science graduate students beginning studies this fall.

The project will use a "grow your own" model, focusing on students who want to stay and work in eastern North Carolina and complete their master's degrees online, officials said.

In addition to tuition costs, the grant will cover university fees and offer a book stipend for the entire degree program until spring 2017. Membership in the North Carolina School Library Media Association and a travel stipend to attend an association conference will be included.

"The project will provide training for jobs as school media specialists, skills in searching for professional jobs and assisting students in securing employment in their home communities," Harer said.

ECU's location and mission to support eastern North Carolina aligns with the Institute of Museum and Library Services' charge to prepare librarians to work in high-need districts, officials said.

The Institute of Museum and Library Services awarded 23 grants out of 82 proposals received from across the country. Only two North Carolina institutions, ECU and the University of North Carolina at Chapel Hill, received grants.

The Institute of Museum and Library Services is the primary source of federal support for the nation's 123,000 libraries and 17,500 museums. To learn more, visit http://www.imls.gov.

ECU librarian Alan Bailey, a graduate of East Carolina University's master in library science program, is employed in the Teaching Resource Center at Joyner Library on the east campus. ECU has received grant funding that will help recruit and train students to serve as librarians in underserved areas of eastern N.C.
Go Back