Candidate Don Cox's 'Granddaddy' Got it All Wrong

Login to Send a Private Message to Stan Deatherage
'90% of life' is not 'showing up on time'; 100% of life is possessing integrity

My dear father, Robert Earle Deatherage, added another wrinkle of instruction to help construct the crystallization of my character, and often I hear his clear voice rattling around in my head before I make important decisions: "Don't be stupid son!"

Slandering the character, by insinuation or otherwise, of accomplished men as a means of elevating one's limited character against theirs will not, or should not get one elected. For Mr. Cox, his character assassination is a substitute for not having any rudimentary understanding of the job of managing a county, and by offering no substantive plan to help in these difficult times is no campaign strategy. However, if Don Cox is successful in conniving the lowest of the low-information Republicans /Independents into voting for him in sufficient numbers to get him through the primary, and through the general election, reasonable folk should question: Would substantive men, elected to serve the good, and substantially more enlightened people of Beaufort County, ever trust the vacuous Mr. Cox?

Mathew 16:26 - "For what will it profit a man if he gains the whole world and forfeits his soul?"

For nearly 18 years, I have endeavored to save Beaufort County by offering solutions, and working with other commissioners that similarly endeavor the same - most notably County Commissioner Hood Richardson. 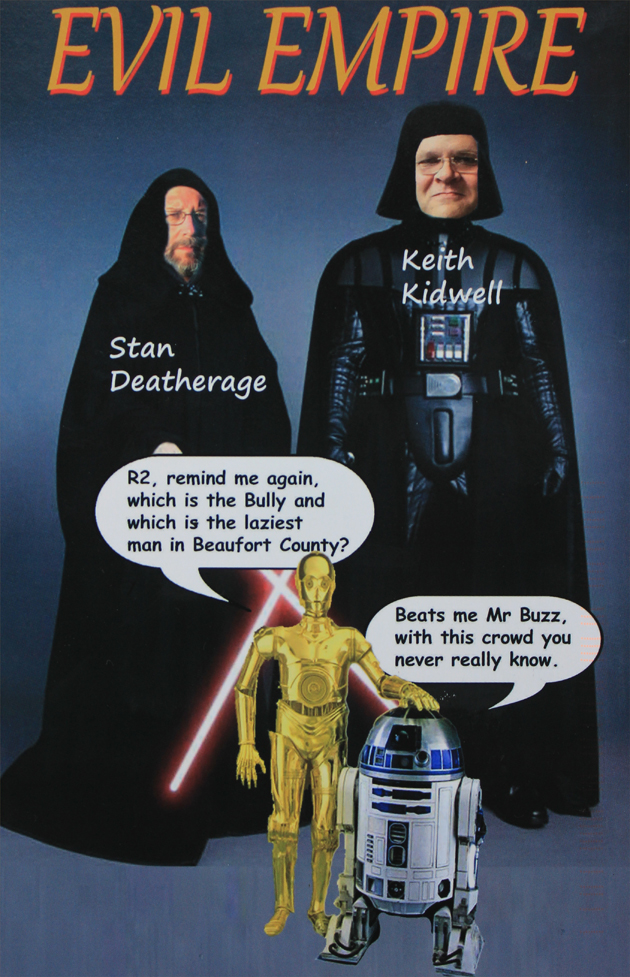 "Evil Empire" with the insinuation that either Keith Kidwell or Stan Deatherage are the biggest bullies or the laziest people in Beaufort County, plus the slanderous accusation that I am habitually late, which of course is a lie. One thing that is not a lie is the immutable fact that the photoshop work for this 'hit piece' is marginal at best, and the writing quite poor. I know this because this is part of what we do at SNI, and we are quite good at it - possibly the best in northeastern North Carolina.

Understandably, me thinks the Sophistic Mr. Cox should seek a refund from The Washington Strategic Group. Who knows, maybe Candidate Cox should seek damages, because I am pretty sure these 'hit pieces', in lieu of having anything valuable to share in the discussion, aren't working for him, and may very well singularly cost him the election. 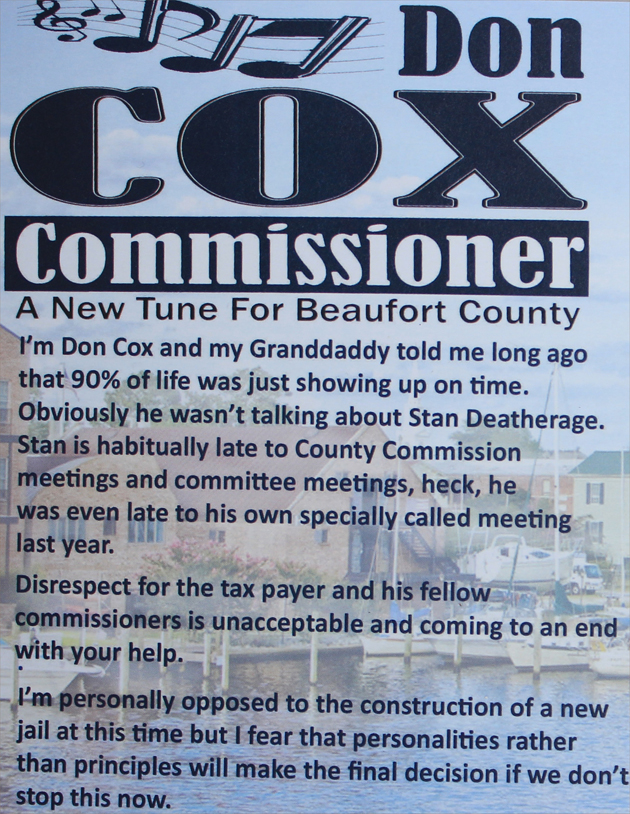 Having no solution other than quoting someone from your past about 'showing up on time' is not a plan, and in my mind does not qualify you to sit at the commissioner dais to ultimately make decisions that will decide the economic fates of the hardworking taxpayers of Beaufort County.

This is not some kind of a political game, a lower rung on the political ladder, where one sacrifices any semblance of good judgement to gain a seat at the game. When one works as a county commissioner, they get dirty, and using their wits is essential. 'Just showing up on time' will not qualify you to serve, and it certainly will not instill within you the integrity necessary to deal with issues involving so many moving pieces - issues that involve people's lives.

Candidate Cox, since you are prone to taking advice from granddaddies, please heed the advice of this granddaddy, me, a granddaddy, who has accomplished every bit as much in his 59 years as your granddaddy did in the entirety of his life. My advice to you is: don't elevate yourself in any contest of ideas by slandering the character of your opponent, while offering nothing of intellectual value in return. There is no substitute for hard work, and knowing your limitations is the greatest measure of wisdom well earned; and possibly the greatest advice that I could offer the Sophistic Mr. Cox is to restate my father's advice to me - "Don't do anything stupid son!"

Possibly Candidate Cox would have been better served to seek my advice rather than recollect the advice of someone whose idea of great wisdom was just showing up, or better yet, that of the Washington Strategic Group, A.K.A. "The Three Stooges" - this poor boy's handlers.

What was that line by P.T. Barnum? "There's a sucker born every minute?" Well it does appear that Mr. Cox well qualifies for that designation if surely not for the county commission.

Publisher's note: There will be much more on these "Stooges" in the near future here within the current annals of BCN, and for some time yet to come.