The Jail: A Bobsled to More Bad Judgement | Eastern North Carolina Now | Last week I told you how the Gang of Four, comprised of Democrats Ed Booth, Jerry Langley, and Robert Belcher along with the ultimate RINO Al Klemm were going to spend Beaufort County's entire savings, about ten million dollars.

The Jail: A Bobsled to More Bad Judgement

Login to Send a Private Message to Hood Richardson
Last week I told you how the Gang of Four, comprised of Democrats Ed Booth, Jerry Langley, and Robert Belcher along with the ultimate RINO (Republican In Name Only) Al Klemm were going to spend Beaufort County's entire savings, about ten million dollars, and then do a bridge loan for about ten million dollars so they could have most of the jail built before the November elections.

The Gang of Four is well aware they will lose the November elections. I say they are "well aware". Even those riding a bobsled into Hades have a prayer that they may be saved from the fire. Losing the November elections is why they have to have, in their warped minds, enough of the jail completed so the new Board of Commissioners will not have the courage to stop the project.

The Gang of four had the gall to tell the public they could not justify the building of a new jail, and because the public would never pass a referendum to build a jail, they are going to cram it down our throats.

This jail process parallels the incredibly bad judgement coming from Washington DC. Most of us feel like we have dropped into some inter sanctum where the rules of reality do not apply. A dream world.

Last week the Beaufort County Jail Committee voted unaminously to use prefabricated steel cells. You can watch the meeting on The Beaufort Observer web site. In viewing the meeting, keep in mind, it was not the words that were actually said, it is the full meaning of what they s aid. They could not afford to give a full explanation to the public.

Prefabricated steel cells are not desirable. Maintenance will be high, wet conditions and prisoners who can scratch the walls at will along with rust, and other defects will cost all of us large sums of money in maintenance costs.. 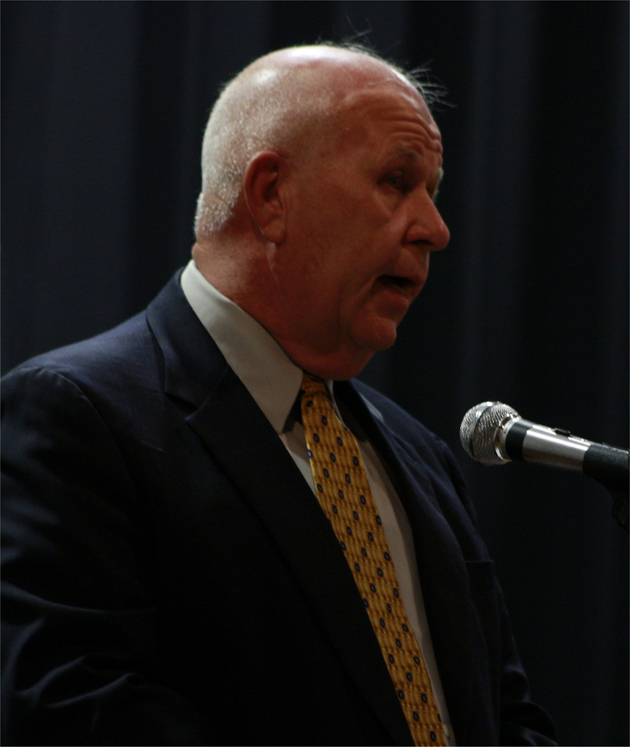 Commissioner endeavors to make a point: Above.     photo by Stan Deatherage

The statement was made that this 14 month project would be speeded up by two months by using prefabricated steel cells. Let us do a little figuring. The project has been going for two months. That means it would be completed by the end of April of 2015. Let us take our two month credit for steel cells. That moves the project completion to the end of March of 2015.

It is possible for the prefab cells and other accelerated work to cut another two months off the project. That moves us to the end of January of 2015. Complex buildings like this usually require three months to finish out with fixtures and wiring when the structure is complete. Wow, the structure could be complete by the end of October of 2014 or before election day.

The new Board is not seated until the first week in December of 2014. Does anyone see a problem here. If you said it is going to be danged near impossible to stop this bobsled, you are right. The new board will have to decide whether or not to abandon this project and suffer criticism for not completing this tax disaster. The new Board will also be the one to raise taxes to pay for operating this monstrosity.

This is why Judge Sermons will not release us from his court order even though we are in complete compliance with the North Carolina jail laws. It will be a sticky wicket for the new commissioners to try to convince any court that they do not need a jail with one sitting there that looks like it is finished. Judge Sermons will be the first judge to command the construction of a new facility and make the mis application of law work.

This entire situation seems like a dream world. We are building a jail we do not need, using every dime of savings we have, doing a bridge loan for at least ten million dollars, under the supervision of a judge who has no authority to compel us to build anything. If you want an example of the arrogance of government, the excess of judges and the bad judgement of elected officials, this is it.

Standing between the public and these dictators is the Chocowinity Planning board, the Chocowinity City Council and to some extent the Washington City Council. I pray that these people will do the right thing and protect us from this bad County Government.

The public should start looking for someone to save us from this tax slavery.
Go Back