Digging Up The Past


Ten rising high school juniors and seniors got busy this summer digging and sifting through 18th century dirt behind a standing slave cabin in Grimesland.

Summer Ventures participant Christina Yu filters materials to search for artifacts that might give clues to the lifestyle of approximately 100 slaves who lived at a Grimesland plantation. (Photos and video by Cliff Hollis)

That's because Charles Ewen, professor of anthropology and director of the East Carolina University Phelps Archaeology Laboratory, is overseeing the students in the Summer Ventures project at the Grimes Plantation. He and two ECU anthropology graduate students are searching for "activity areas and deposits" from slave life before the Civil War.

"Archaeology has showed us a lot more about slave life than ever gets written down," said Ewen. "The owners rarely write anything about how the slaves are living. The slaves are illiterate, so they don't write much about themselves. The only way we're going to find out about these guys is through archaeology."

Summer Ventures gives academically advanced high school juniors and seniors interested in science and math a month-long opportunity to engage in research and intensive study. When they aren't off campus unearthing artifacts, the students have a chance to experience residence hall life and campus amenities.

Eleventh-grader Yong Su An, from Northwest High School in Greensboro, said Summer Ventures has allowed him to further explore his interest in anthropology and archaeology. "I've always loved history, so digging to find stuff about the past really intrigues me," he said.

This is Ewen's 10th year with the Summer Ventures program. "If you had asked me when I first came to ECU, 20 years ago, 'Would you like to take a dozen high school kids out to dig in the hottest part of the summer?' I'd say, 'Are you kidding me? I don't even want to be out there,'" he said. 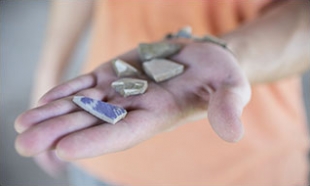 Since very little was written about slave life, artifacts found at the site can help tell the story.
But he said he has been pleasantly surprised by the experience. "Most of the kids, when they got out there, had never used the business end of a shovel. But they get into it, and honestly, it is hot and it is dirty, but they don't complain," he said.

After the students finish their field work, they write a research paper about archaeology and their excavation.

"They really do contribute," Ewen said. "They're doing real research, so it's not just a made-up dig that I'm having them practice with. It's real data that I need."

Mariah Menanno, an 11th-grader from Research Triangle High School in Raleigh, said she could not wait to start. "When I was little, I was really interested in dinosaurs, so I've always wanted to dig to see what I could find in the ground," she said.

"One of the unfortunate things about high school is that students don't get to learn about archaeology or anthropology," said C.J. Idol, an ECU anthropology graduate student from Kernersville. "Summer Ventures is a chance for them to learn something beyond what they would get in regular high school classroom," he said. "Even if we don't turn them into archaeologists, we can turn them into supporters of archaeology." 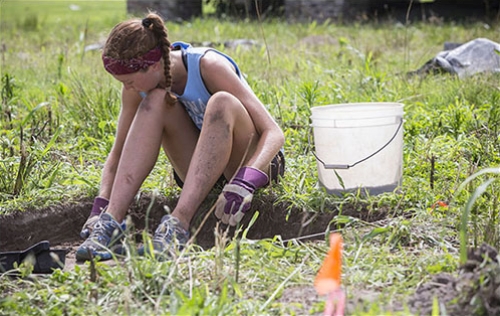 Summer Ventures participant Hanna Peterman works on a section of ground near the slave quarters of the Grimes Plantation.
The excavation units Ewen opened this summer are based on shovel tests Summer Ventures students dug last year.

"Shovel tests are just shovel holes where you're looking to see if there's stuff in it or not. It's to narrow down the areas that are going to be productive for excavation units," said Ewen.

So far, mostly 19th and 20th century artifacts such as glass, pottery and buttons have been found on the plantation, but Ewen is hoping to find the refuse pits where four other slave quarters once stood.

"It's really cool that we still have one of the slave quarters standing because usually they get knocked down since they weren't (considered) that important," said Idol.

The Grimes Plantation is on the National Register of Historic Places and was the home of Civil War Major General Bryan Grimes. The estate was started by Grimes' grandfather in the 1790s and was primarily used to produce cotton until Grimes' death in 1880.

Ewen said there were probably more than 100 slaves working on the plantation at its peak. He hopes to find out more about their daily lives, including their diet and how much of their African heritage they had retained. Since joining ECU in 1994, Ewen has directed projects at Tryon Palace Historic Sites and Gardens in New Bern, Fort Macon State Park in Carteret County, Hope Plantation in Windsor, Somerset Place near Creswell, and conducted a long-term archaeological study of historic Bath.

"For being a relatively small department, we've got a very active archaeological program. We do prehistoric, historic, forensic and Middle Eastern archaeology," he said.