Memorial Day, a day of remembrance and honoring our military | Eastern North Carolina Now | We cherish too, the Poppy red that grows on fields where valor led, it seems to signal to the skies that blood of heroes never dies.

Memorial Day, a day of remembrance and honoring our military

Published: Monday, May 30th, 2022 @ 5:49 pm
By: Leslie Schneider   ( More Entries )
Although Memorial Day is celebrated by most with cookouts, a flag flying, a day off work, and maybe a vacation, there is a deep meaning behind this federal holiday. The "Memorial" in Memorial Day is due to its being a day where we actively remember our ancestors, our family members, our loved ones, our neighbors, and our friends who have given the ultimate sacrifice. No one knows the true meaning of Memorial Day more than those who have lost friends and loved ones to a war, and veterans who were wounded, disabled or not. There are several things that you can do to observe Memorial Day: Visit cemeteries and place flags or flowers on the graves of our fallen heroes, visit memorials, fly the U.S. Flag and POW/MIA flag at half-staff until noon, participate in a National Moment of 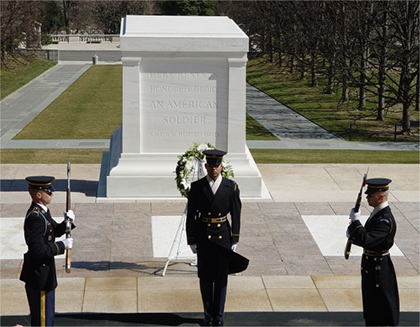 Taps to be played, renew a pledge to aid the widows, widowers, and orphans of our fallen and to aid the disabled veterans.

Memorial Day, originally called Decoration Day, is a day of remembrance for those who have died in our nation's service. Memorial Day was officially proclaimed on May 5, 1868 by General John Logan, national commander of the Grand Army of the Republic, in his General Order No. 11, and was first observed on May 30, 1868, when flowers were placed on the graves of Union and Confederate soldiers at Arlington National Cemetery. The first state to officially recognize the holiday was New York in 1873. By 1890 it was recognized by all of the northern states. The South refused to acknowledge the day, honoring their dead on separate days until after World War I (when the holiday changed from honoring just those who died fighting in the Civil War to honoring Americans who died fighting in any war). It is now celebrated in almost every State on the last Monday in May (passed by Congress with the National Holiday Act of 1971 (P.L. 90 - 363) to ensure a three-day-weekend for federal holidays), though several southern states have an additional day for honoring the Confederate war dead: January 19 in Texas, April 26 in Alabama, Florida, Georgia, and Mississippi; May 10 in South Carolina; and June 3 (Jefferson Davis' birthday) in Louisiana and Tennessee.

In 1915, inspired by the poem "In Flanders Fields," Moina Michael replied with her own poem:

We cherish too, the Poppy red
That grows on fields where valor led,
It seems to signal to the skies
That blood of heroes never dies.

She then conceived of an idea to wear red poppies on Memorial Day in honor of those who died serving the nation during war. She was the first to wear one, and sold poppies to her friends and co-workers with the money going to benefit servicemen in need. Later a Madam Guerin from France was visiting the United States and learned of this new custom started by Ms. Michael and when she returned to France, made artificial red poppies to raise money for war-orphaned children and widowed women. This tradition spread to other countries. In 1921, the Franco-American Children's League sold poppies nationally to benefit war orphans of France and Belgium. The League disbanded a year later and Madam Guerin approached the VFW for help. Shortly before Memorial Day in 1922 the VFW became the first veterans' organization to nationally sell poppies. Two years later their "Buddy" Poppy program was selling artificial poppies made by disabled veterans.

Visit our article "Washington DC Part I Arlington Cemetery" to see our nation's memorial to our fallen soldiers.
Go Back