Test scores and graduation rates for 2013-14

School accountability comes in two forms -- parental choice and testing. In the parental choice model, schools are directly accountable to parents who have or are given the means and opportunity to move their children and tuition dollars to competing educational institutions. Alternatively, parents must rely on standardized testing and other metrics to determine the quality of the schools assigned to their children. Unfortunately, if their assigned schools produce disappointing results, only a fortunate few have the option of relocating their children to schools that better meet their needs. Therein lies the major advantage of choice-based accountability.

Ideally, we would have a public school accountability system that moderated our schools' dependence on testing and advanced parental choice opportunities, particularly for disadvantaged children. Well-funded public school advocacy groups, unions, politicians, and a variety of left-wing organizations stand in the way. By vigorously opposing parental school choice, these special interest groups force taxpayers to lean even more heavily on test-based accountability. Ironically, many of these groups also object to the "culture of high stakes testing" in our public schools, even though they have been instrumental in preserving, even strengthening, that culture. In the end, testing results are important but do not need to be.

What were the results?

Yesterday, state education officials released 2013-14 testing results and graduation rates for all North Carolina public schools. According to the measures and limited context provided, public schools performed admirably. Graduation, proficiency, and student growth rates increased. But this is just a small part of the story. Indeed, we need to use the limited amount of information and data available to consider why and how these increases occurred. Like most things in life, it's complicated.

For example, the four-year graduation rate increased for the ninth year in a row, rose across all subgroups, and is the highest recorded rate in the state's history. It now stands at 83.8 percent. Moreover, 109 public high schools had graduation rates that were at or near 100 percent.

While the upswing in the graduation rate is good news, keep in mind that quantity is not necessarily an indicator of the quality of North Carolina's high school graduates. Community college remediation rates suggest that many students graduate without adequate skills and knowledge. Last year, around two-thirds of recent high school graduates received math, reading, and/or English remediation upon entering a North Carolina community college.

The change to five achievement levels has greatest impact on the lower levels, but it is enough of a difference to make year-to-year comparisons hazardous. Rumor is that the N.C. Department of Public Instruction (DPI) will produce a document that allows the current five-level test results to be compared to the four-level results released last year (or vice versa).

Across all subjects and grade levels, around 44 percent of North Carolina students failed to earn grade-level proficiency or Level 3 and above. Over half did not meet the "career and college ready" standard or Level 4 and above. State education officials claim that both are products of higher standards, improved classroom instruction, and more demanding tests. Certainly, earlier changes to cut scores made it more difficult for students to earn proficiency, but the introduction of a five-level system appeared to lower the bar slightly. It is possible that the achievement level change was the primary driver of the test score increase. At least the media seems to think so. But I do not discount the idea that factors beyond mathematics played a role. Of course, the increase may not hold after state education officials provide an apples-to-apples comparison of last year's and this year's scores.

Nearly 75 percent of North Carolina schools met or exceeded their academic growth goals, as determined by N.C. DPI. Although academic growth is an indispensible statistic, it requires context. For example, a school that meets or exceeds growth expectations may still enroll few students that score at or above grade level.

What about charter schools?

Of the 33 charter schools that reported graduation rates in 2014, over two-thirds of them had a rate that exceeded the state average. Twelve had graduation rates that were at or near 100 percent. The graduation rate for all charter high school students was around 90 percent last year.

According to a preliminary analysis of state test scores, charters have outperformed district schools for the fifth consecutive year.

Are there political implications?

It will be interesting to see how elected officials and advocacy groups spin these results. Liberals will say that the scores show that public education is not broken. Conservatives will claim some credit for an increase in test scores and graduation rates that occurred under their watch. Liberals will point out that Democrats, who controlled state government before the 2010 election, deserve some of the credit. Conservatives will argue that frequent changes to the accountability system undermine the test scores and conceal troubling trends in persistently low-performing schools and districts. Liberals and conservatives are both right and wrong.

I say that we reserve judgment until we get more information and data. I will provide both as I continue to crunch the numbers. 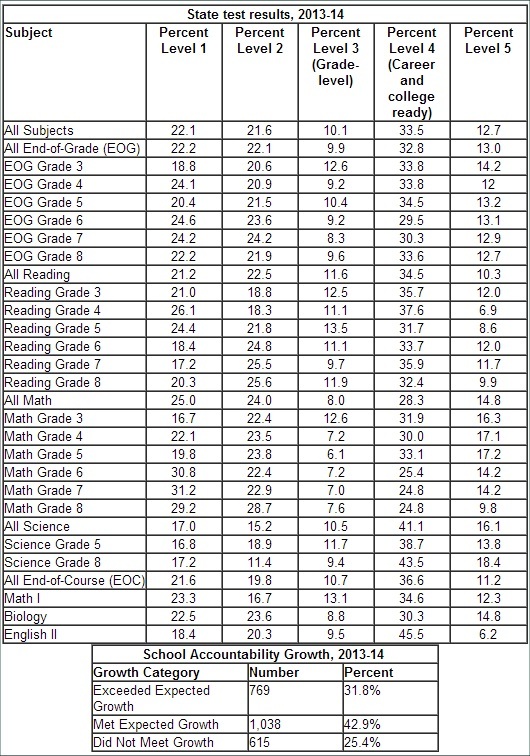 "The State Board is committed to high standards with the expectation that our educators and students will rise to meet them. It is imperative that we do everything we can to challenge our students while in school so that when they graduate they will be able to compete with anyone for jobs on a global scale."

Click here for the Education Update archive.
Go Back