Odd Picture on a Beautiful Night | Eastern North Carolina Now | I take many pictures some weeks. In the span of any given month, I make hundreds of images. To date, with tens of thousands of pictures taken and stored, I have never seen a photo this odd.

Odd Picture on a Beautiful Night

Login to Send a Private Message to Stan Deatherage
Please ... Help me explain this?

I take many pictures some weeks. In the span of any given month, I make hundreds of images. To date, with tens of thousands of pictures taken and stored, I have never seen a photo this odd.

I made this image at about 8:15 pm, Saturday, June 25, 2011. My wife had gone to the Turnage Theater, here in downtown Washington, North Carolina, to purchase tickets to see the band, Sinful Savage Tigers, who were supposed to be playing that night. I was to join her later at the Turnage after I took pictures down on the waterfront - it was an extraordinary sunset.

Tonight, Sunday, June 26, 2011 at approximately 8:30 pm, while going through my pictures to determine which ones to save, I noticed this odd image of the Washington Beaufort County Chamber of Commerce building. What is odd in this photo is the streaking gray cloud that is just in front of the tree and the west side of the brick structure. Take a look at the image below, and we will continue the conversation. 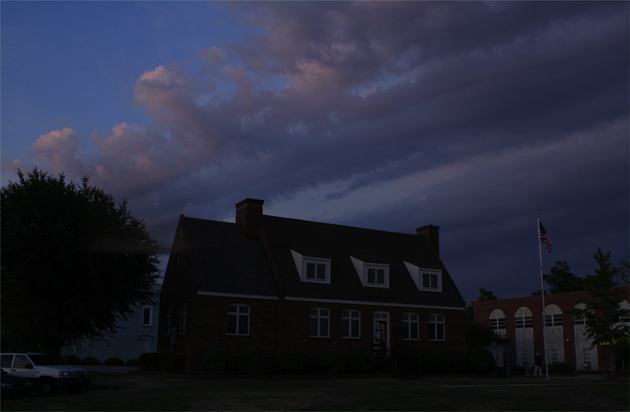 Odd Picture at Dusk ... please help me explain this?
Click here
or on the picture above to see the larger image of this oddity.
After my examination of this image, I called my daughter, Meredith Deatherage Loughlin, and asked if she would examine the photo to see if she had a ready explanation for this anomaly. By virtue of the magical internet, I sent the full file to her, and within 10 minutes, she called me back and told me: "I, and Neil (her husband), have never seen anything quite like it."

Now, let me take a moment to explain why I sent this image to my daughter, Meredith. Meredith, and her husband, Neil Loughlin, earned Bachelor of Fine Arts degrees, with a concentration in photography, from East Carolina University. Both still work in their chosen fields of study. Both have made tens of thousands of photos, both know photoshop, and other graphics programs, both are asked to show their work all over the Southeast: They undrstand photography - especially raw photography such as this image. They could not readily explain this anomaly.

Can any of you folks, who see this picture, offer any reasonable explanation for this random puff of movement, which I did not see with my naked eye when I made this image?

I took this photo because I found this high strata of clouds interesting and beautiful. I am pointing my Cannon digital SLR (Rebel) nearly due north, away from the sun. In the dusk of the dying day, I am shooting the photo in manual mode: (I estimate) ISO 200, aperture in the very low register (opening it up wide to let in more light, while focusing mostly on the clouds above the Chamber building), shooting speed of 80th of a second. I shot this picture fast enough that they should have been no blur if a huge bird (maybe a mating pair of very large Bald Eagles) had flown between me and the tree / building. Also notice the American flag to the right. It is reasonably clear in a slight breeze. I'm satisfied that an 80th of a second would have recorded no blur, unless an object was moving at over 120 miles per hour at this close of a range.

In summary, I simply state that I recorded an anomaly that I can't explain. Can you explain this? I respectfully request your assistance in this matter.

Update 070111: So far no one has been able to credibly debunk this picture with the grey puff of movement. One fellow considered that it may be a grasshopper, but my Photoshop guy, who is as good as anyone in the region, debunked that.

If no one can come forward with a credible explanation of the anomaly, I'll just consider that I took a photo that is paranormal. My first.
Go Back