Fury | Beaufort County Now | The unsanctified blood and gore, and the unmitigated violence to inflict such, in copious proportions with extreme prejudice, upon one's enemy was the unrelenting theme of this most effective film.

Ironically, life in the M4A3E8 Sherman Tank (named by the British for the Union General) was no different during World War II. The unsanctified blood and gore, and the unmitigated violence to inflict such, 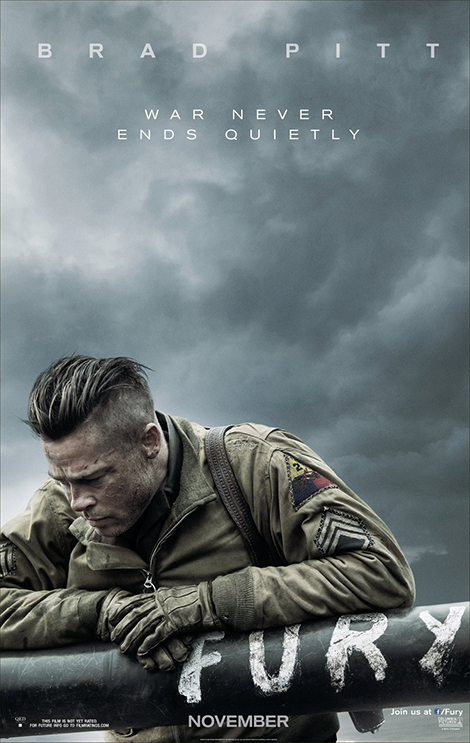 in copious proportions with extreme prejudice, upon one's enemy was the unrelenting theme of this most effective film. Not only was the film effective in relaying its antiwar statement, while projecting the heroism of sacrifice through honor and duty, the film, moreover, offered a prolonged glimpse into the hearts of those who fought for America, when America desperately needed heroes, some of mythological proportions.

The battle fields of World War II, as is the case in all of America's wars, were won by the many heroes, who were willing to make the ultimate sacrifice to win the day and save themselves and their comrades from eminent and total destruction. "Fury's" grandest theme was to relate that in the 'fog of war' that everyone does not win, everyone does not survive; in fact, in terms of casualties, no individual survives intact, but he who wins does survive to fight another day. That is this essence of total war: It ain't ever over until it is over.

World War II was total war: The confrontation of good vs. evil, where collateral casualties were in greater abundance than those soldiers, who perished, within the many great, bloody battles upon the multiple fields of valor, and in the devastated cities under occupation, or bombed into near oblivion. The film "Fury" was set in such a olace, in the last days of World War II in the European Theater after the bloody Battle of the Bulge, just across the Rhine River as the American Army rolled through southwestern Germany toward Berlin - the center of Germany's Nazi government. Standing in their way was an inspired Wehrmacht, willing to fight to the last man to preserve their Nazi Deutschland, or despondent soldiers willing to surrender their division, of that same Wehrmacht, to the first American conquerors rolling headlong toward Berlin, just ahead of the revengeful Russians sweeping in from the north and east. Just which element of that storied Wehrmacht, which these American conquerors would indeed face was truly just a 'roll of the dice'. 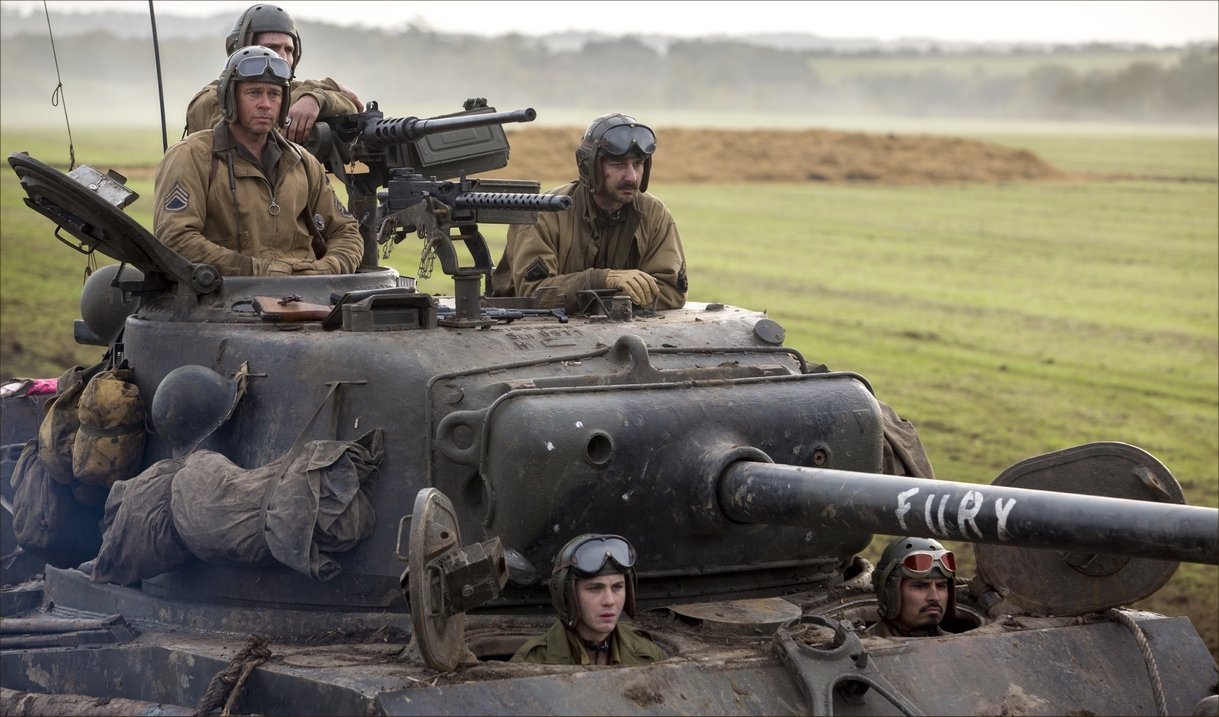 "Onward Christian soldiers, marching as to war": Above.     Click image to expand.

Some soldiers met spotty opposition as the Americans rolled through Germany, and wee almost treated a liberators. The film "Fury" is about those remaining members of the Wehrmacht that fought a bitter fight on their home soil to blunt the invading hordes. For those troops engaged on both sides the remaining days of Europe's greatest war was the twentieth century's version of Tecumseh Sherman's "War is Hell".

Brad Pitt playing "Fury's" flawed but complex super warrior, the protagonist Sergeant Don 'Wardaddy' Collier, may have said it best, "I started this war killing Germans in Africa. Then France. Then Belgium. Now I'm killing Germans in Germany. It will end, soon. But before it does, a lot more people gotta die." 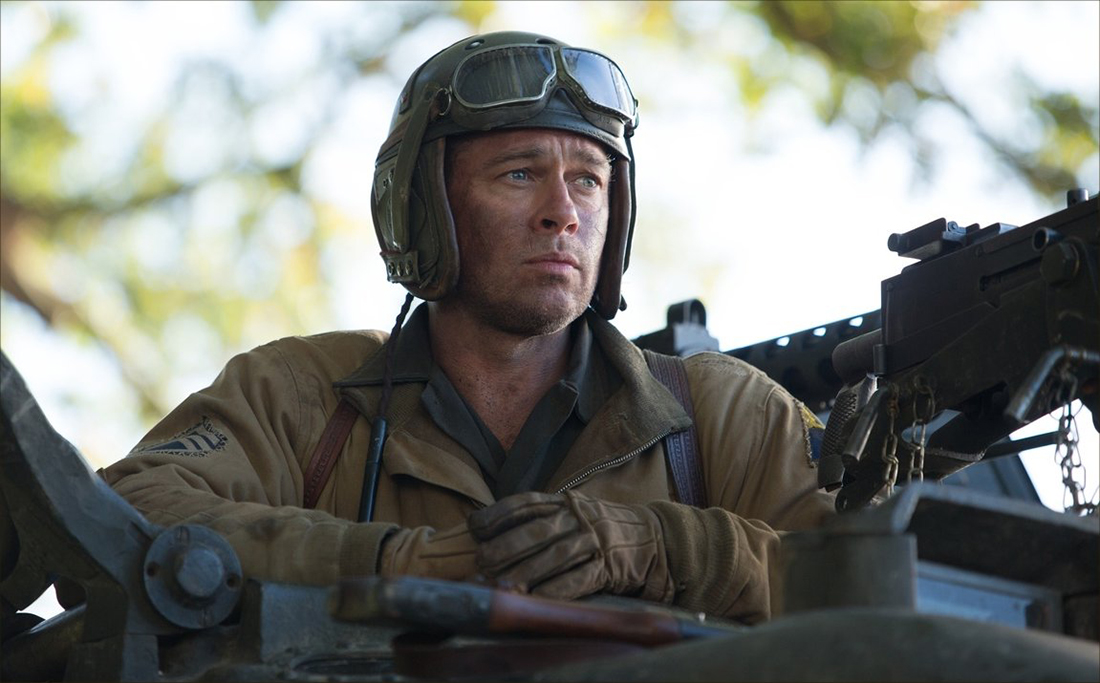 And die they did, the horror never spared for the audience's eyes. "Fury" exhibited the horrific carnage of war as if it was just a terrible, all encompassing job to kill with great prejudice, or be killed in return. To that ignoble end, "Fury" was more of a film about survival, and thus became the great, overarching dynamic of Sgt. Don 'Wardaddy' Collier - to bring his crew through the last of the war - alive.

To make that growing challenge a reality, here so close to the end of this war - possibly the greatest of mankind's 'Hell(s) on Earth' - Wardaddy was emboldened to succeed. Beneath his 'cool under extreme fire' exterior, there existed a seething need for Wardaddy to paradoxically coexist between two worlds within his ego: the nurturer of warriors, the provider of abject destruction of that enemy blocking the path of his final objective - unconditional peace. Brad Pitt's Wardaddy was the symbol of America as a warring giant upon a stage that would soon be brought to its inexorable end. His challenge, dramatic and pure, was endemic of life as a micro cog in the machine of war. His spirit, his soul, his conviction of purpose was as much the theme of this film as was all the poor players, and the larger pieces upon this board game of total war. To not understand Brad Pitt's Sgt. Don 'Wardaddy' Collier would be tantamount to not understanding the film. 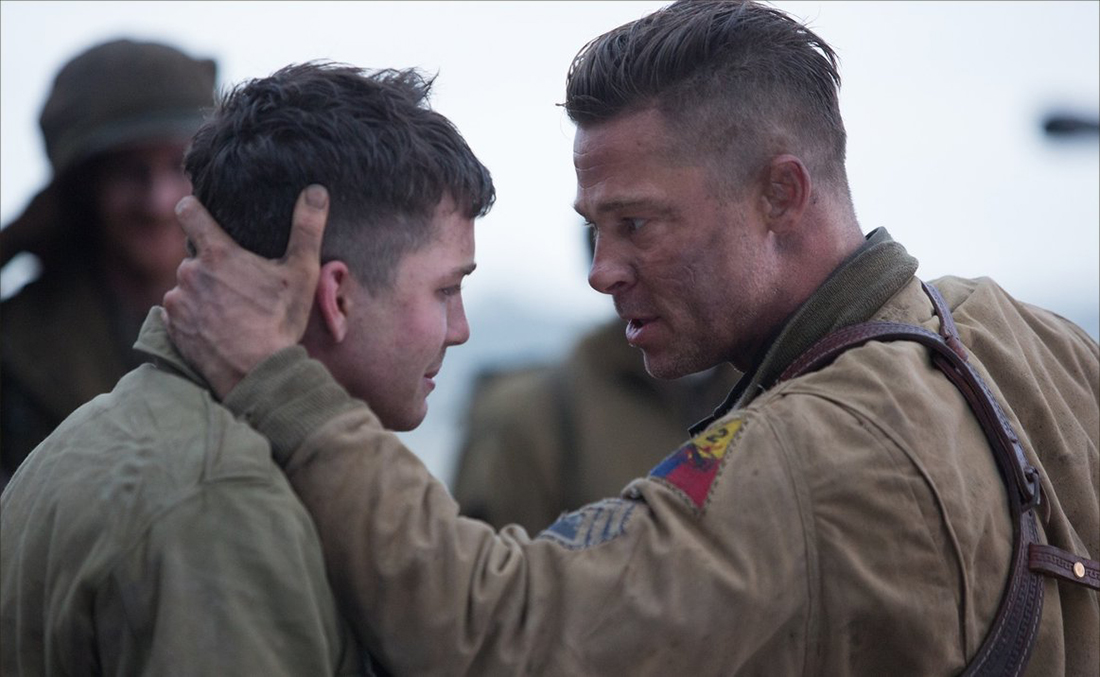 An impactful confrontation between resident warrior god, Wardaddy (right), Brad Pitt, and new replacement Norman Ellison, played by Logan Lerman, over whether the replacement would be capable of pulling his weight, as the tanks bow gunner, when it cam to the killing of the enemy as needed: Above.     Click image to expand.


One might wonder, from whence did Writer /Director David Ayer find his material to base the amalgamated character of the extra-committed Sgt. Wardaddy, as to how he saw his duty and as to his perseverance to carry on until the final fruition, and I have one idea, which was particularly embellished toward the end of the film. In the European theater, there was an American hero, who in no way resembled Brad Pitt's Wardaddy, except, they were most similar in devotion to duty above all else. This real American hero was a 19 year old Texan, slight in stature, named Audie Murphy. 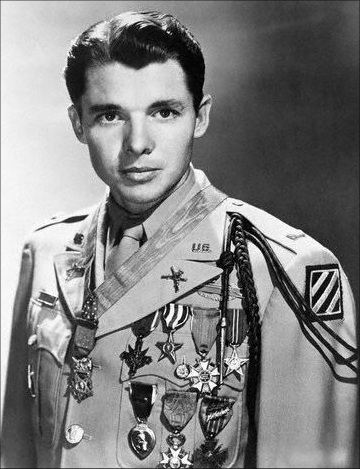 1st Lt. Audie Murphy, with all of his medals. Noticed the Congressional Medal of Honor hanging around his neck.
Audie Murphy, who was the most decorated soldier in World War II, also fought in Northern Africa, then Italy, then France, missed the Battle of the Bulge due to wounds, but rather than fight his way through Germany as a front line soldier, he was shot up enough (3 purple hearts) that he was moved to a rear position. In Lt. Murphy's last action, beginning January 26, 1945, he mounted a disabled American M10 tank destroyer, in the Colmar Pocket, near Holtzwihr, France (near the German border; after directing his well shot up company (only 18 were not casualties), under his command, to take refuge in the woods, 1st Lt. Murphy (battle field commission) provided covering fire against a full German Company and 6 armored vehicles.

After exhausting the ammunition for his M1 Carbine, Lt. Murphy climbed atop the burning M10 tank destroyer, and methodically used the tank's big, but exposed 50 caliber machine gun, for about an hour while dodging bullets and shrapnel, until all of his ammunition was spent, and the brave Lieutenant wounded twice.

Lt. Gen. Alexander Patch, commanding general of the Seventh Army, presented Lieutenant Murphy with the Medal of Honor for his heroism, which saved the lives of those under his command.
Go Back