Would The Fair Tax Kill Obamacare? | Beaufort County Now | I have never been a fan of the Fair Tax, a proposal to abolish the income tax and substitute a national sales tax. My opposition has nothing to do with the merits of a national sales tax as opposed to an income tax per se. Clearly, as an economist, I agree that the proper and most efficient tax... | John Locke Foundation,Roy Cordato,Fair Tax,Obamacare,income tax,national sales tax,economy

Would The Fair Tax Kill Obamacare?

1. Would the Fair Tax Kill Obamacare?


I have never been a fan of the Fair Tax, a proposal to abolish the income tax and substitute a national sales tax. My opposition has nothing to do with the merits of a national sales tax as opposed to an income tax per se. Clearly, as an economist, I agree that the proper and most efficient tax base is consumption, not income which is consumption plus saving. My concern has always been that it would be impossible to completely eliminate both the income tax and the possibility of bringing it back at some point in the future. In other words, by creating an infrastructure for a new national tax, we could end up, in the long run, with both. Instead, I have supported converting the current income tax into a consumption tax by eliminating savings from the tax base, making all savings deductible and flattening the rate.

But while the proposal I like, typically called a consumed income tax, would in principal be equivalent to the Fair Tax in its impact on the economy, there is one advantage that the Fair Tax would have that could, depending what ultimately happens with Obamacare, change my thinking. By eliminating the income tax and the IRS, you would also be eliminating the enforcement mechanism for Obamacare's individual mandate.

Under the Affordable Care Act — Obamacare — everyone who is not receiving health insurance as part of his employment benefits package or a government program like Medicare or Medicaid is required to purchase a federally approved health insurance plan. The IRS through the income tax system enforces this "individual mandate."

Every year when a person files his tax return he must show proof that during that year he was covered by a health insurance plan that meets all of the requirements of Obamacare. If the tax filer is not insured the IRS levies a penalty, and it is collected by reducing the uninsured taxpayer's refund. It is generally recognized that the individual mandate is essential to the operation of Obamcare. It is how healthy, low cost people are forced into the risk pool, which in turn subsidizes higher cost unhealthy individuals, particularly those with preexisting conditions.

The constitutionality of the individual mandate ended up being based on this enforcement mechanism. Chief Justice John Roberts was the deciding vote in this case and he determined that the penalty collected by the IRS was not a fine at all but a tax. Ultimately this was because it operated through the income tax system. If it were levied directly on the non-compliant citizen like, for example, a fine for not complying with an EPA regulation or even speeding, then it would no longer be a tax and Obamacare would lose its constitutional status.

In this regard, the advantage that a Fair tax would have over a consumed income tax is that it would abolish the existing income tax and the IRS. In doing so, it would also be abolishing the mechanism for enforcing Obamacare's individual mandate. This would mean that a new enforcement mechanism that could pass constitutional muster as a tax rather than a fine would have to not only be devised but would have to pass Congress as an amendment to the original Affordable Care Act. This would be extremely unlikely, particularly with any Congress that would pass a Fair Tax in the first place.

If my assessment is correct, the implementation of a Fair Tax could accomplish something that two Supreme Court cases and the election of Republican majorities in both houses of congress has not — the effective repeal of Obamacare.

Does this mean that I have changed my mind on the merits of a national sales tax vs. a flat rate consumed income tax? Not necessarily, but the reality of using tax reform to kill two birds with one stone makes, in my mind, a properly implemented sales tax at the national level more appealing than it once was.


The 2015 ozone season began on April 1 and, as I have been doing since this newsletter was started, each week during the ozone season this newsletter will report how many, if any, high ozone days have been experienced throughout the state during the previous week, where they were experienced, and how many have been recorded during the entire season to date. (Note: ground level ozone, which is what we are reporting on, is often called "smog.") According to current EPA standards, a region or county experiences a high ozone day if a monitor in that area registers the amount of ozone in the air as 76 parts per billion (ppb) or greater. The official ozone season will end on October 31. All reported data is preliminary and issued by the North Carolina Division of Air Quality, which is part of the state's Department of Environment and Natural Resources. Thus far this season there have been 5 high ozone days recorded on any of the state's 42 monitors. Three occurred on June 25 and two on August 5.

The table below shows all of the North Carolina's ozone monitors and the high readings on those monitors for each day of the 7-day period, August 24-August 30. 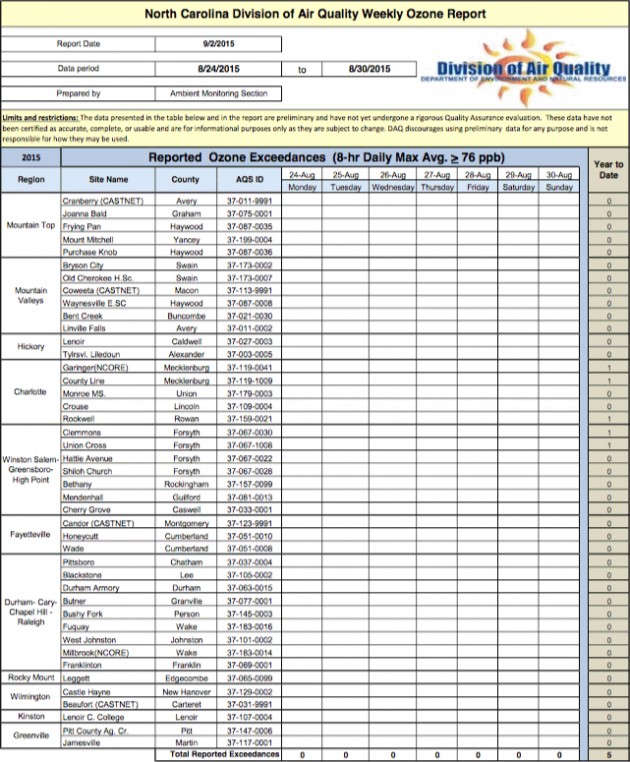