The Lyricist of the Classic""It's All in the Game"; Continues to Communicate his Melodic Art | Beaufort County Now | Carl Sigman, the lyricist of many of America's most famous love songs, passed from this temporal plane in September of 2000; however, his music lives on, embodied in his beautiful songs of hope and heartbreak.

The Lyricist of the Classic""It's All in the Game"; Continues to Communicate his Melodic Art

Login to Send a Private Message to Stan Deatherage
Publisher's note: Carl Sigman, the lyricist of many of America's most famous love songs, passed from this temporal plane in September of 2000; however, his music lives on, embodied in his beautiful songs of hope and heartbreak.

Even an old Rocker such as myself, who uses BCN to promote the best music of a storied age, was drawn to Carl's "It's All in the Game", back in 1979, when one of my favorite musicians, Van Morrison, recorded the song infused with one of his own, "You Know What They're Writing About".

Recently, I wrote a short expression of appreciation for the excellence of Van the Man's treatment of the fine song - A Unique Classic Covered by a Legendary Irishman. Within a few hours after I posted this article on Beaufort County Now, Michael Sigman, Carl's loving son, contacted by private message via BCN's private message system. We had a good discussion, and to that extent and with Michael's permission, I offer to our readers Michael Sigman's illuminating words, specifically about his father's creative process in creating this timeless classic - "It's All in the Game". 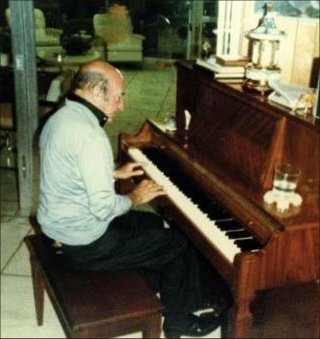 Carl Sigman, at home, composing melodies that continue to live in the musical lexicon of America's best loved melodies. Image provided by Michael Sigman.
Michael Sigman here, Carl's eldest son. Nice piece on Van/"It's All In The Game." Thought you'd get a kick out of this, which I wrote as part of a bio of my dad:

The most interesting story-behind-a-song saga in Carl's career began with a phone call from a publisher. For years Carl had thought about writing a lyric for a tune he remembered from his classical training. "The Dawes Melody," or "Melody In A Major," was a classical violin and orchestra piece composed in 1911 by none other than Charles G. Dawes, later Vice President of the United States under Calvin Coolidge.

Dawes composed the piece in a single piano sitting. "It's just a tune that I got in my head, so I set it down," he told an interviewer. He played it for a friend, the violinist Francis MacMillan, who liked it enough to show it to a publisher, and Dawes was officially a composer. The tune garnered some popularity when Jascha Heifetz used it for a time as a light concert encore.

Early in 1951, Carl decided to try and write a lyric to the theme, believing that it was in the public domain, as free of complications as an old Mozart melody. He knew the two-octave range would be a problem, but figured he could fool around with the melody, take out the high notes and make it more singable.

By sheer coincidence, Warner Brothers publishing exec Mac Goldman called one day to ask Carl to consider writing a lyric to "The Dawes Melody," the copyright for which, it turned out, was owned by Warners.

Once Carl recovered from the news that the song was in fact already copyrighted, he rejiggerd the tune and realized that a phrase from another song he was working on, a conversational phrase he'd plucked from the vernacular, was perfect for this tune. Once he plugged that title into its proper place, the lyrics to "It's All In The Game," to quote Carl, "wrote themselves."

Many a tear has to fall but it's all in the game
All in the wonderful game that we know as love
You have words with him and your future's looking dim
But these things your hearts can rise above
Once in a while he won't call but it's all in the game
Soon he'll be there at your side with a sweet bouquet
And he'll kiss your lips and caress your waiting fingertips
And your hearts will fly away
Carl also wrote this never-recorded intro, to be sung prior to "Many A Tear..."
Where love's concerned
At times you'll think your world has overturned
But if he's yours, and if you're his
Remember this...


Unfortunately, the Vice President never got to hear the lyric. On the day Carl handed in the finished assignment, Dawes died of a heart attack, prompting Mac Goldman to quip, "Your lyric must have killed him."

"It's All In The Game" first found its way to prominence in a prototypic version, in waltz time, by Tommy Edwards. That record made the top twenty in late 1951, and the song was quickly covered by the likes of Louis Armstrong, Dinah Shore and Sammy Kaye. Seven years later, Edwards, still recording for the MGM label, re-cut the song in the contemporary 4/4 tempo doo-wop mode, and it became one of the biggest hits of the fifties, staying in the top 10 for twelve weeks, six of them at #1.

During the summer of '58, when "It's All In The Game" was battling it out for the top spot with another classic, Domenico Modugno's "Volare (Nel Blu Dipinto Di Blu)," I was a nine-year old attending Kings Point Country Day Camp. As I changed into my baseball uniform in the locker room every day, I'd burst with pleasure when the radio played our song, and "boo" whenever "Volare" came on.

The countless covers of "It's All In The Game" reveal the song's universality and versatility. Some of the best include a supper club soul rendition that went top 10 R&B for The Four Tops in 1970; two country chart entries, by Tom T. Hall on Mercury and Merle Haggard in the 1970s and '80s respectively; a genre-transcending interpretation by Rock and Roll Hall of Famer Van Morrison on his 1979 album "Into The Music"; and interpretations by Bobby Vee, Isaac Hayes, Jackie DeShannon, Cass Elliot, Elton John, Nick Lowe, Bobby Blue Bland, Art Garfunkel, Keith Jarrett and Freddy Fender.

Publisher's note: Michael Sigman has promised to send to BCN 3 boxed sets of Carl Sigman's melodies performed by a variety of the leading musicians of much of the 20th Century, which, Michael's help, we will examine to the extent we are able, as is our purpose to do so.
Go Back