East Carolina University is getting high marks by two national organizations for its efforts in supporting student veterans and military service members.

In a new listing released Nov. 9, the Military Times ranked ECU 28th in its Best for Vets: Colleges 2016. ECU was the highest ranked in North Carolina; in total, seven N.C. institutions were listed among the 125 four-year schools ranked.

ECU also has been named a "Military Friendly School" for 2016, which recognizes the top 20 percent of trade schools, colleges and universities that are doing the most to embrace service members, veterans and their families.

"Our region is rich in military facilities and traditions and it only makes sense for us to be very intentional in serving these wonderful students," Mitchelson said. "They enrich all that we do." 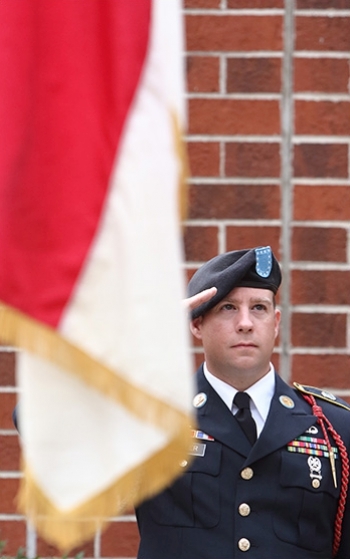 Recognition of military service members and their families is central to the annual Veterans Day ceremony on campus, pictured above. ECU's commitment to the military earned top rankings in national media outlets this year.
The Military Times rankings are based on a comprehensive assessment of veteran and military student services and rates of academic achievement at 600 schools participating in a detailed survey, according to a news release.

"We award the Best for Vets designation to the very best — the colleges that really are setting the example," said Amanda Miller, editor of Military Times' Best for Vets ranking and special editions.

The rankings are published this week in printed and online editions of Army Times, Navy Times, Air Force Times and Marine Corps Times as well as at www.MilitaryTimes.com.

ECU was last recognized as a "Military Friendly School" in 2010. The designation process by Victory Media includes extensive research and a data-driven survey of more than 8,000 schools approved for Post-9/11 GI Bill funding.

The Military Friendly Guide is the premier resource used by military personnel and their families when choosing an institution of higher learning. The publication is distributed to all base education centers worldwide and offered to every military member at retirement or transition from service to civilian life.

ECU's Academic Military Affairs Committee coordinated the university's efforts for designation. The committee has members from across campus including the registrar, admissions, Student Veterans Services and continuing studies. Rondall Rice, a 29-year Air Force veteran and ECU's director of university studies, chairs the committee and coordinated the survey responses.

Rice said designation as a Military Friendly School and the ranking by Military Times recognizes ECU's consistent, outstanding efforts across all areas of the university — academics, academic and student support, and services — for current military personnel, veterans and their families.

"The awards reflect our commitment to make veterans feel welcome on our campus and recognize their unique situations and value to our classrooms and campus culture," Rice said.

ECU's programs include participation in the Veterans Administration Yellow Ribbon Program, which extends GI Bill benefits to cover out-of-state tuition. ECU also has one of only 79 VA-funded Veterans Support on Campus representatives across the nation and the only one in North Carolina.

Other support groups include the student-led Pirate Veterans and the ECU Student Veteran Services office which offers Green Zone training for faculty and staff to increase understanding of military and veteran students and issues they may face in college. Also, ECU has programs to award academic credit for military training using American Council on Education recommendations. 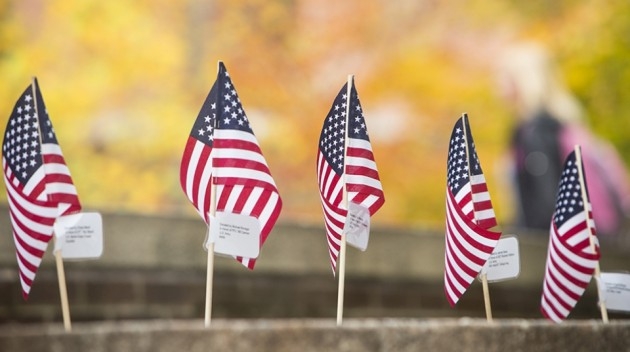 A Field of Honor outside Joyner Library is designed to honor veterans and members of the military. Flags were sold by the Pirate Veterans Organization, with proceeds benefiting homeless veterans in Greenville. ECU's support for student veterans and military service members has gained national recognition. (Photos by Cliff Hollis)