Interstellar | Beaufort County Now | "Interstellar" is a film that begs us to consider the certainty of an imminent life or death scenario with few choices, with all of them difficult, and ultimately unavoidable.

Publisher's note: Some of you might have noticed that Wyatt has been AWOL (absent without leave) of late, and, to remedy that reality, I have enticed him back into revealing the good and bad in: film, music the graphic arts by reminding him that he does not always need to write the massively long, instructive reviews for which he is famous. The new plan for Wyatt is Simple: Just tell us how he feels about the art, help understand it, grade it, rate it, entice us or dissuade us.

To accomplish this new approach, Wyatt will employ multiple formats, but chief among them will be his treatment of film in his new series "Blips on Hits and Misses", even, on occasion, considering two films juxtaposed (2 X 2), and then flip the film titles in a second post to make sure both films get top billing, and read by those of a shorter attention span.

To begin this new approach, Wyatt will reach back and review a handful of films that he missed, which need to be definitely seen or appropriately avoided. Most film reviews will be singular in construction, but be on the lookout for the 2 X 2 format. It will be forthcoming.

"Interstellar" is a film that begs us to consider the certainty of an imminent life or death scenario with few choices, with all of them difficult, and ultimately unavoidable. Accordingly, the film was more about the angst of interpersonal relationships, at the most possible dire moments, filled with the most interminable stress before the imminent demise of the species on this dying earth, at least for biologic organisms. 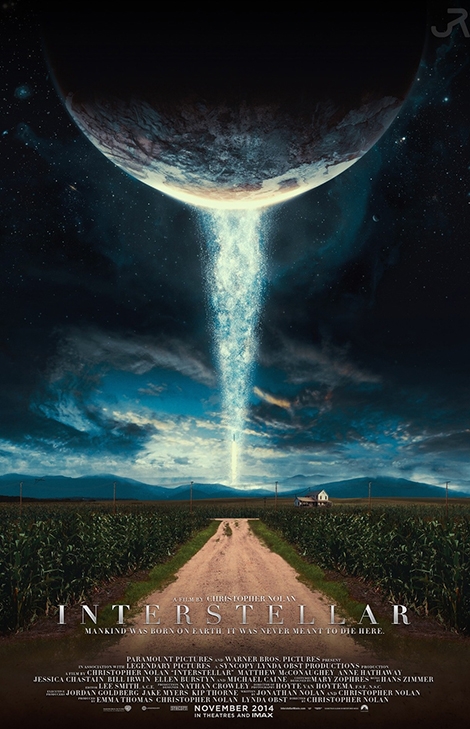 The Science Fiction construct as to an inhabitable earth's demise is that the building blocks of oxygen are depleted - nitrogen? (it's been a while since I saw the film) - crops are unsustainable, trees are dying; the natural filters of carbon dioxide cleaned to oxygen are expiring, and soon, as well, all living things upon this Earth. It is a known commodity, within the intelligentsia mostly, that this slow death is occurring - "first humans starve, then they suffocate" - with the only reality being that the planet must be vacated to sustain the species; not everyone, but a chosen few, and then only if another habitable planet can be found.

At the heart of this epic tragedy is the Cooper family, with the patriarchal head, Joe Cooper, played by Matthew McConaughey, a former NASA shuttle pilot, aeronautical engineer, and now farmer, before NASA was scuttled by a progressive United States government bent more on revisionist reeducation of people, rather than the science of fixing things, and knowing truths. Orbiting the mercurial "Coop", a genius as well as a consummate pilot, is his 10 year old daughter, "Murph", who is the budding nubile equivalent of her doting father. 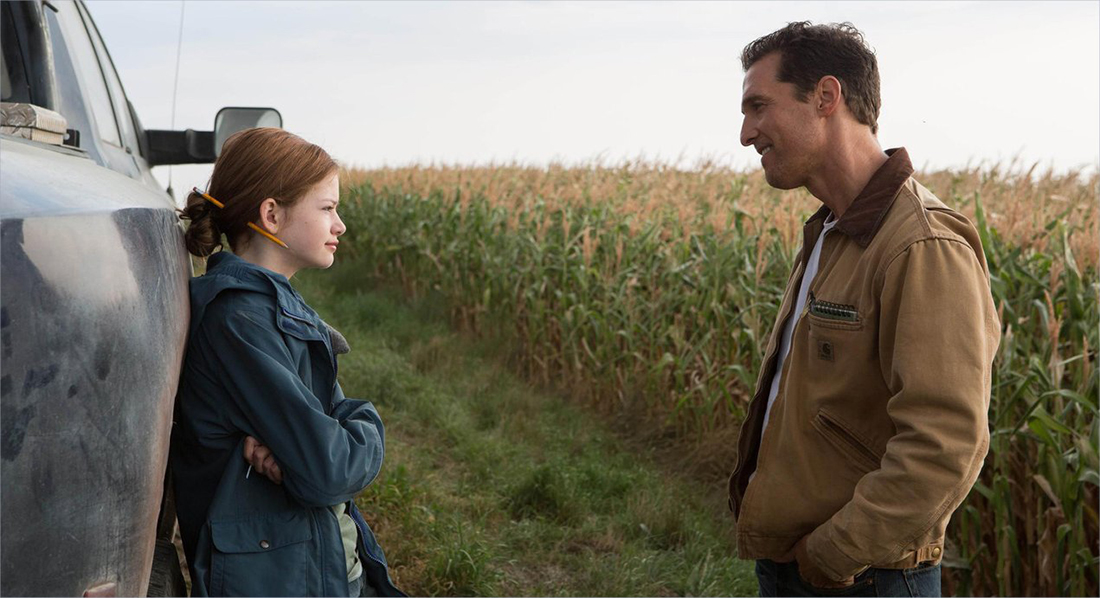 The core of this 170 minute long film is almost as much about the tragic relationship of these two integral characters, as it is about the slow to quickening pace of the earth's biological demise; however, the essential actor of this Science Fiction morality play may be the Conundrum of Relativity fully played out, a conceptual harbinger, and then the cruel mistress of a tragic father /daughter relationship. 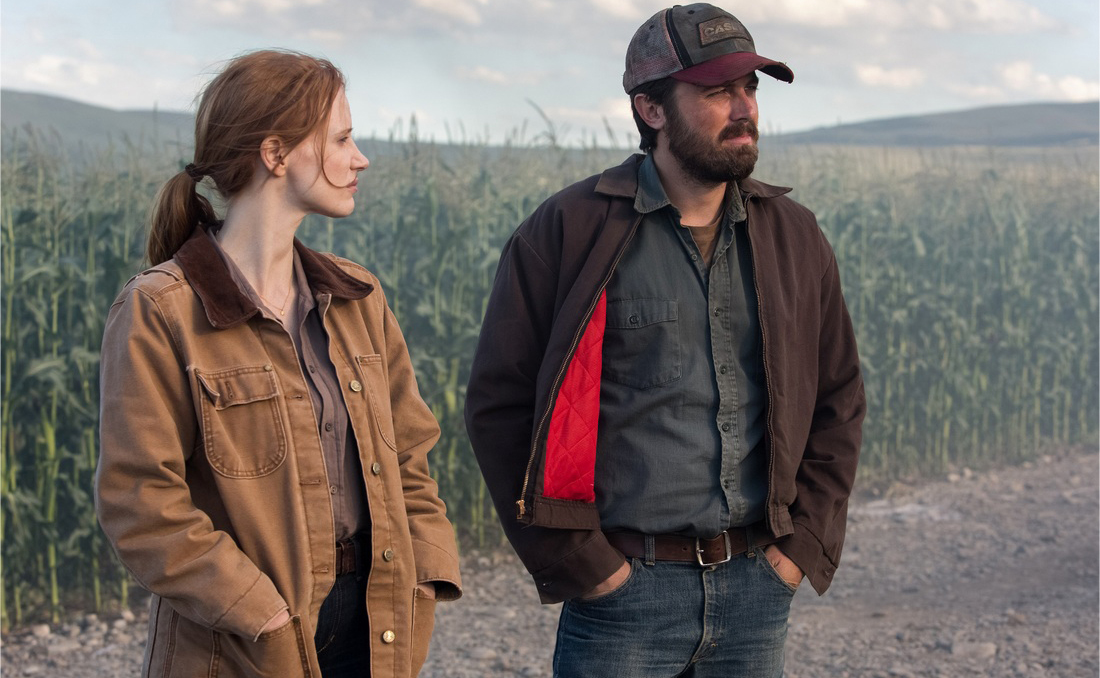 A much older Murph, Jessica Chastain, stands with her brother, Tom (right), Casey Affleck, who became the family's farmer, when "Coop" went interstellar far, far away: Above.    Click image to expand.

When Joe Cooper, McConaughey, found that there still existed a shadow NASA, who were in dire need of his service, his patriotic pragmatism got the better of him, which he heeded to save his family in the only manner that was possible - to employ his estimable talents to save his People upon this dying planet. 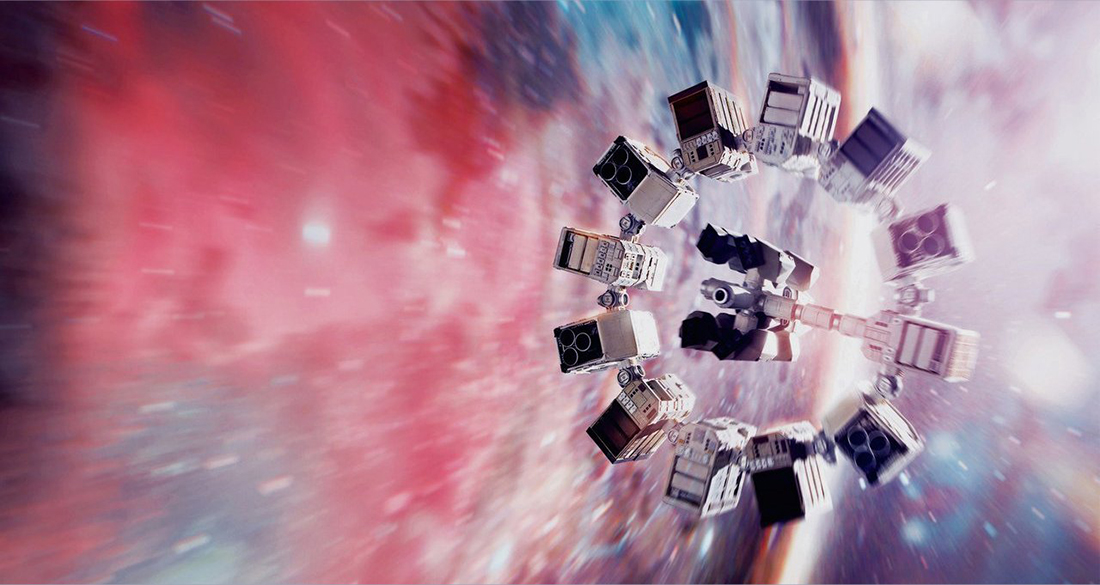 The mother ship takes aim for the wormhole to go interstellar between this solar system and one in another galaxy far away: Above.   Click image to expand.

Joe was not a willing hero, but did not shrink from the obligation, regardless of the cost of separation from his family against the reality of the insurmountable odds that any real good would could from it. That is the theme of the film: A good man raises a bright daughter, who finds that she is fatherless, as that good endeavors to save humankind as a species, against the backdrop of relativity, its causal time vs space, and the overwhelming gravity of Worm Holes and Black Holes juxtaposed against the angst of fatherhood and the loss of time irretrievable and unavoidable. 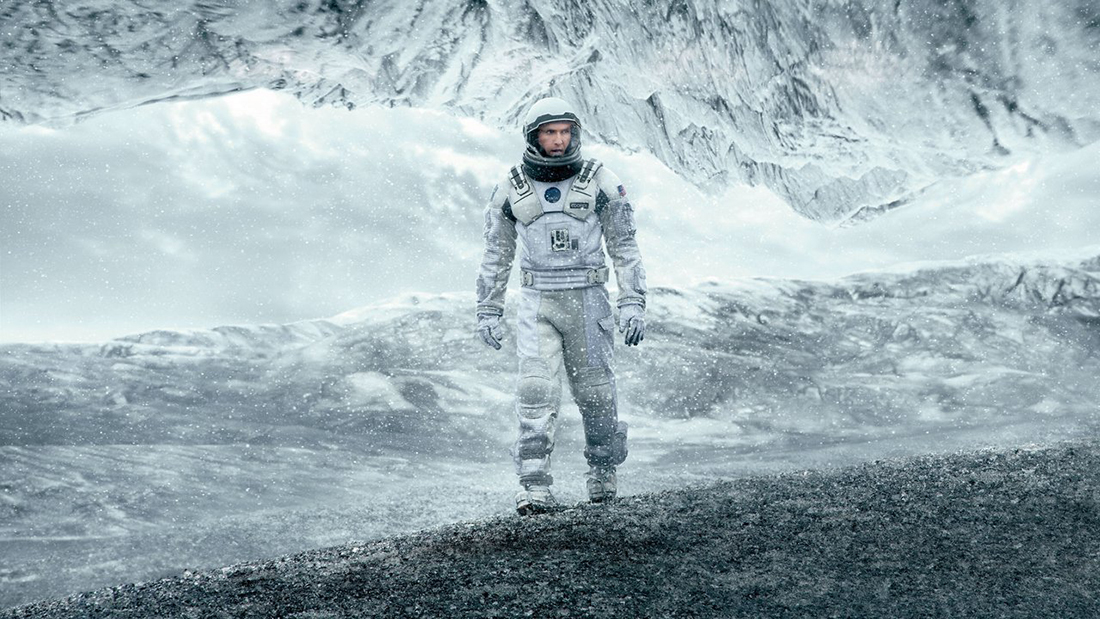 Matthew McConaughey finds his way upon the barren landscape on a planet barely habitable in a galaxy far beyond our Milk Way: Above.   Click image to expand.

The film was directed by Christopher Nolan, and written by himself and brother, Jonathan Nolan. It is a complicated film, meandering through science, science fiction and complex human emotions in an uneasy manner, gritty and raw, like life itself. The acting was all first rate, with Michael Cain, Anne Hathaway, Wes Bentley, Jessica Chastain and Matt Damon shouldering much of the burden, but it is Matthew McConaughey, who takes on the yoke of helping us suspend some major disbelief, and does his utmost to cast the story real within these massive mountains of astral science, both real and partly imagined ... and all these efforts the film works and works well.