Renewable Projects to Cost Taxpayers Nearly $1 Billion | Beaufort County Now | The final batch of solar and other renewable energy projects requested under the "safe harbor" law enacted in April by the General Assembly could cost North Carolina taxpayers as much as $937,804,785 in credits, according to aggregated figures released Wednesday by the North Carolina Department... 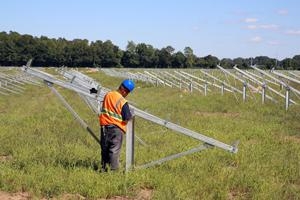 A worker assembles a frame for solar panels at a Duke Energy project near Elizabeth City.
Photo by Don Carrington
RALEIGH     The final batch of solar and other renewable energy projects requested under the "safe harbor" law enacted in April by the General Assembly could cost North Carolina taxpayers as much as $937,804,785 in credits, according to aggregated figures released Wednesday by the North Carolina Department of Revenue.

Altogether, the projects represent a total of 1,641 megawatts in new renewable energy for facilities that are under construction. The state income tax credit - 35 percent of the costs of investing in new renewable energy facilities - was set to expire at the end of December, but Senate Bill 372, Renewable Energy Safe Harbor, extended the scheduled sunset of the income tax credit by one year if developers met certain thresholds.

To get the "safe harbor" credit, the owner of a project under construction needed to apply with the Department of Revenue by Oct. 1 and pay an application fee of $1,000 per megawatt of capacity with a minimum payment of $5,000. The extension was intended to protect projects that had been in the planning stages.

The credits are taken in installments over five years and cannot exceed certain levels of a recipient's overall tax liability.

At the time the bill was debated, the legislature's Fiscal Research Division estimated that the safe-harbor provision would cost state taxpayers $183.5 million in tax credits over five years.

Instead, Revenue received 201 applications for the tax credit and collected $1,918,735 in application fees. When the John Locke Foundation reported earlier this month on the unexpectedly large number of applications, Betsy McCorkle, chief lobbyist for the N.C. Sustainable Energy Alliance suggested on Twitter the extension would result in a net gain for state taxpayers.

The Revenue report, provided to Carolina Journal by spokesman Trevor Johnson, suggests otherwise. The $938 million figure "represents the highest possible credit allocation if every project application submitted is realized full," Johnson wrote. "This figure likely includes projects which will be finished prior to the existing sunset date, but applied as protection against potential unforeseen project delays."

To qualify, projects with a total size of less than 65 megawatts must have completed 80 percent of their expenditures and physical construction before Jan. 1, 2016. Projects 65 megawatts and larger must be at least 50 percent complete before Jan. 1.


Update: After this story was posted, McCorkle tweeted a request for a correction, writing:
"I said nothing about the application fees being a net positive for taxpayers."
Go Back