All About Anticipation | Eastern North Carolina Now | The secret to staying warm after jumping into the icy waters of an outdoor pool in the middle of January is simple for Stephen Gray: just stay in.


The secret to staying warm after jumping into the icy waters of an outdoor pool in the middle of January is simple for Stephen Gray: just stay in.

That's exactly what Gray will do for the 20th annual Polar Bear Plunge at East Carolina University on Thursday. More than 1,100 Pirates are expected to jump 25 at a time into the outdoor pool at the Student Recreation Center as part of a long-running campus tradition that grows larger every year.

After jumping with the first group, Gray will remain in the water to cue the following groups, as he has for the past several years. Affectionately known as "Papa Bear," Gray is an ECU staff member who has been involved in the event since the beginning.

"The water is often actually warmer than the air," said Gray. "People think it's the opposite. We add ice to the water to make it seem colder. It's really all about the anticipation."

"The splash down wasn't as bad as I'd thought," recalled John Carrere '08, who took the plunge as an alumnus in 2012 and 2013 in memory of a friend. "However, the moment I popped back above water was a different story. The water seemed to cling and instantly freeze to my skin and the exhilaration was unlike anything I'd experienced."

With temperatures forecast to be right around freezing Thursday evening, Gray's assessment will likely hold true. However, cold temperatures haven't deterred students from wanting to become part of history at ECU. While jumping usually begins at 7 p.m., students start lining up earlier every year to sign their waivers and get assigned to their groups.

After taking the plunge, students will move to the indoor pool to warm up and dry off. Food will be provided by Aramark and Coca-Cola, and several student groups like the club dance team and the Latin dance team will offer music and entertainment. Souvenir T-shirts are provided to the first 1,100 jumpers, and all jumpers get a certificate and a chance to sign the official 2016 plunge banner.

This tradition has been 20 years in the making, according to Gray.

"Last year we had record numbers at 1,145. Some students come in their own groups, some in costumes. Each year, we try to outdo the year before," he said.

Limited parking due to the new student center construction may impact numbers, but organizers are hoping to keep up the record-breaking attendance streak.

The first Polar Bear Plunge had 37 participants, mostly staff with a few students, and took place in January 1997. There were 50 or so the second year, which was when the groupings of 25 started.

"Not may people know that the first event was to celebrate the opening of the Student Recreation Center," said Nance Mize, former associate vice chancellor for campus recreation and wellness, who instigated the first plunge. The center opening was several months behind schedule, and Mize came up with the idea to renew interest in the facility. Now retired after 35 years working at ECU, Mize remains involved with the event.

"Everybody told me I was crazy," Mize said. "They said, 'nobody will do that,' but we did. It took a while to catch on. It's been exciting for me to see it become a tradition. It's hard to believe it has been 20 years. Now it's one of the biggest traditions at ECU. We wanted it to be more than just a jump."

"It gives a sense of community," said event organizer Jon Wall, director of intramural sports at ECU. "It allows them to say 'I'm a part of this tradition, I'm a part of this school.' It's the camaraderie of experiencing something together. They're part of something bigger. It's the anticipation of looking forward to the event."

Carrere said, "My participation in the Polar Bear Plunge is something I'll always remember, not just for the audacity it took to jump in a pool of water in sub-freezing temperatures, but the bonds of friendship that were strengthened with those I jumped with as a result." 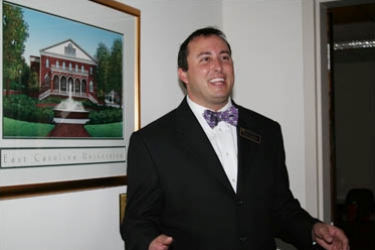 Chris Murphy '96, '10
Carrere decided to jump in memory of his friend Chris Murphy '96, '10, an alumnus and admissions administrator at ECU who was killed after being struck by a car in 2011. Murphy, who jumped almost every year, always tried to get Carrere and their friends to jump with him. A year after his death, Carrere decided to make it happen.

Polar Bear Plunge jumpers are encouraged to wear the event T-shirt to the ECU basketball games on Saturday, Jan. 30. The ECU men's team hosts Houston at noon followed by the ECU women tipping off against Temple. Those wearing a Polar Bear Plunge T-shirt will receive a ticket when they enter Minges Coliseum, and one lucky fan will get a chance to shoot at halftime of the women's game to win $10,000.

More than 1,100 participants braved the icy waters of the outdoor pool for the annual ECU Polar Bear Plunge last year. Organizers are hoping to break records once again during the 20th anniversary of the event on Jan. 21.
Go Back