World Travelers | Eastern North Carolina Now | From visiting Buddhist holy places to examining Peruvian culture in the Andean highlands, students at East Carolina University have a world of places and programs to explore through study abroad.


From visiting Buddhist holy places to examining Peruvian culture in the Andean highlands, students at East Carolina University have a world of places and programs to explore through study abroad.

More than 35 faculty-led summer programs are offered including one by associate professor of religious studies Derek Maher, who will take 15 students to India and Nepal to map the Buddhist Holy Land and follow the Buddha's life. This is the 11th year that Maher has led a trip to South Asia.

"It teaches them something about how complicated the human condition is," Maher said. "All you have to do is be in India for a day to understand that nothing is taken for granted there."

As part of the program, Maher required students to enroll in his course this spring to learn research methodology in the digital humanities, collaborative research and more about the area they will travel. Once abroad, the students will form six research groups, each focusing on a sacred place using the skills they learned this semester. Each group will guide the other students in the field experience at their site. All the work will be included in a website developed by Maher. The research is expected to continue at least five years, providing more opportunities for students to contribute, he said.

One of the students going to India is Katie Chandler, an ECU sophomore majoring in philosophy and history. She studied last year in Italy and South Africa, and serves as an ECU Global Ambassador who can help answer questions from students interested in going overseas.

"I believe that my study abroad experiences have influenced my life a great deal, and have changed my perspective on my global understanding," Chandler said. "I have a strong urge to work abroad and perhaps even live abroad if presented with the opportunity." 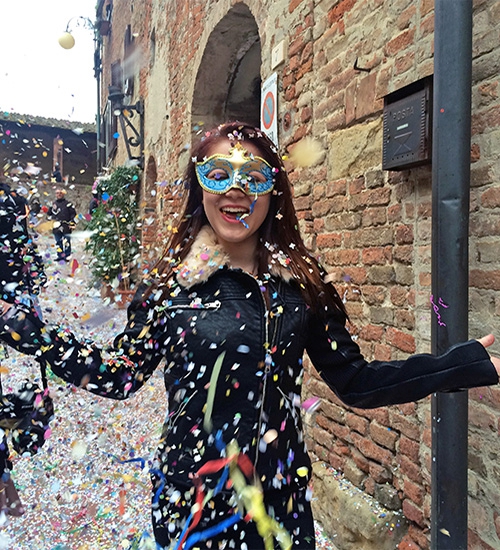 ECU sophomore Katie Chandler celebrates during Italy's Carnevale festival. (Contributed photo)
Later this summer, she will travel independently to Scandinavia (Iceland, Norway, Sweden and Denmark) with a friend who went on the same study abroad program in Italy last year. Chandler said the two planned the trip without outside help, something she would have been too timid to do before her time abroad.

"I have more confidence in myself and my capabilities as an individual after my study abroad experiences," Chandler said. "I truly think that studying abroad has changed every aspect of my life. I see the world with a new view and I even see myself and my own friends and family with a new perspective as well."

Since studying abroad, Chandler's grades have improved and she's planning to attend graduate school, "something I would never have considered before," she said.

A recent ECU graduate, Kaileigh Hubbard ('13), said her study abroad experience led to her career working with students from around the world as an international admissions advisor at the University of Buffalo, The State University of New York.

Hubbard double majored in English and English education at ECU and planned to teach high school students. She studied in London in 2012 during the Olympics. "Now working in higher education, I still get to serve as a teacher, just in a different capacity," she said.

She tapped into her study abroad experience previously as a graduate assistant working in international student programs and admissions at Canisius College, where she received a master's degree in college student personnel administration last year.

When she met her international students arriving in the United States for the first time, "I was able to relate to their experiences of being in a new place, culture shock, language barriers, meeting new people, getting around a new city," she said. "It allowed me to connect and empathize with my students much more than it would have had I not gone abroad."

Another ECU graduate, Vincent Meadows ('13) said his career also has been influenced by studying abroad. A graphic designer, he works for an international media company providing news in nine languages in Asia.

Meadows studied in Indonesia the second semester of his junior year through an exchange program, which helped save money while providing academic credit hours. "It was not only my first travel experience, but my first time ever on a plane," he said. "Traveling was something I thought only rich kids did. At that point, I wanted to go somewhere I thought I would never go to again."

He said he made lifelong friends and learned about graphic design on an international level. He credited ECU's International House with helping him sort through options to make study abroad possible. He also believes his travel experiences have made him a well-rounded, more marketable employee. 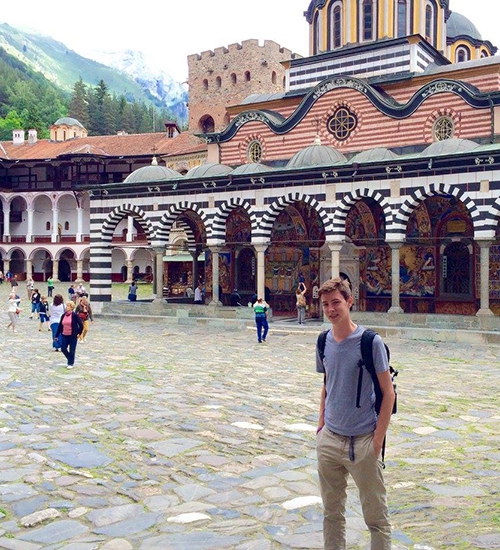 During a tour of Vitosha Mountain in Sofia, Bulgaria, ECU student Hunter Marshall takes in an amazing view of the Dragalevtsi Monastery in the background. (Contributed photo)
"Traveling by yourself teaches you skills you can't replicate in a classroom," Meadows said. "Many employers will not care about your travels, but the employers you want to work for do."

Like Meadows, some students don't see themselves as being able to study abroad due to costs or concerns about being away from family and friends, Morris said.

Scholarships are available, and if students opt for an exchange program, it costs the same as tuition at ECU, Morris said.

Faculty-led summer study abroad programs vary in price depending on the location and length of the trip.

"We want to get the word out that study abroad is valuable," she said. "Being able to adapt to different environments, and if they are studying a foreign language, studying abroad shows their commitment to learning that language."

The Thomas Harriot College of Arts and Sciences' strategic plan calls for doubling the number of students who study abroad, said Maher, who also serves as associate dean for undergraduate studies in the college. Under Dean William Downs' leadership, the college has significantly increased the number of scholarships available for study abroad, Maher said.

"It's the best classroom you can get all year," Maher said. "There's no number of books they could read to help them understand what it's like."

Chandler encourages anyone contemplating study abroad to just do it. 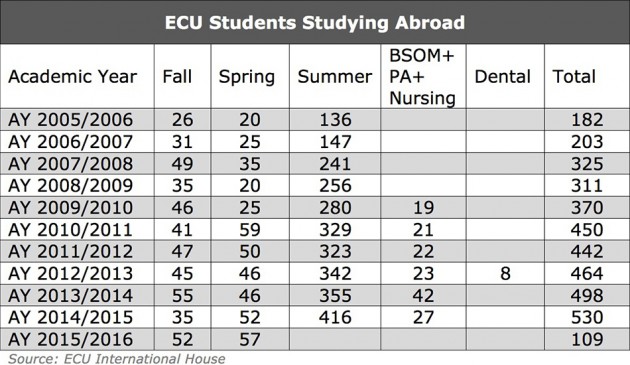 Participation totals
"It is worth the time, relatively inexpensive (usually the same cost as a semester of living on campus at ECU), and the skills you learn while abroad will change your life forever, in the best ways possible," Chandler said. "You will learn fantastic things about our amazing planet and the diverse people who live on it, as well as learning much about yourself along the way."

For more information, go to http://piratesabroad.ecu.edu. 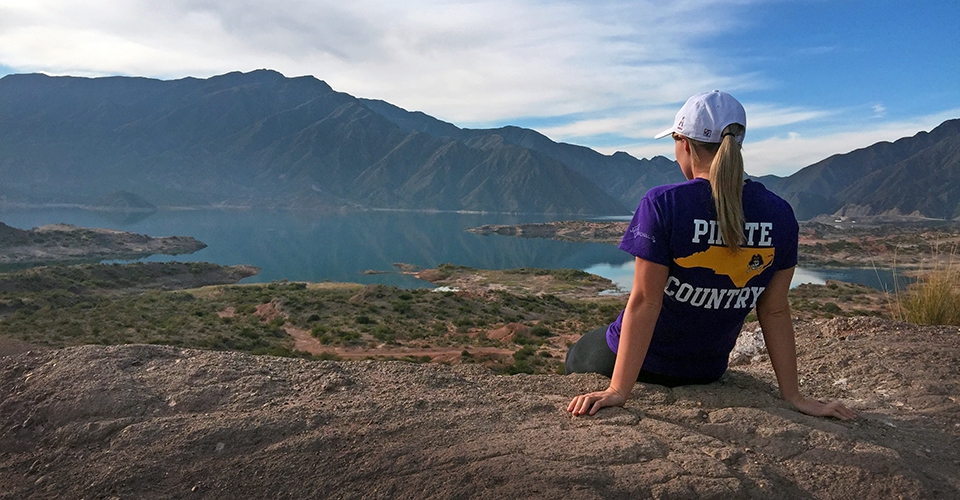