Finding Time For Family At BCCC | Beaufort County Now | There is an equation most people try to balance throughout their careers.

Finding Time For Family At BCCC

There is an equation most people try to balance throughout their careers. While income is important; creativity, time at home, and satisfaction can be even more important. For Jason Squires, a mechanical engineering student at Beaufort County Community College, an imbalance of family time and work made him leave a position that many of his peers may envy in order to pursue something greater.

At the time Squires enrolled at BCCC, he was working as an assistant manager at Food Lion in Greenville. He had achieved this status over the course of a decade, working his way up through a Winn Dixie grocery store in Ocala, FL where the company encouraged him to pursue a career. 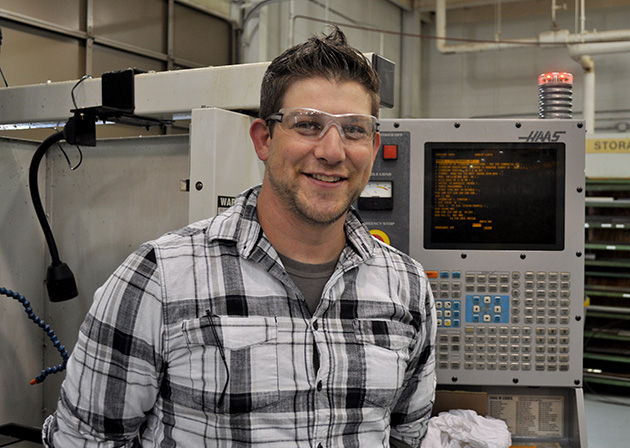 Squire's parents had both grown up in Beaufort County. When his grandfather Frank Squires Sr. passed in 2012, Jason decided it was time to move his family to Chocowinity. He left Winn Dixie and started at Food Lion. At the Food Lion in Greenville, Squires was salaried, supervising over 50 employees and handling about $200,000 in sales per week.

Squires had something that most 30-year olds do not have: a family of seven. While the money was great, Squires needed holidays and weekends to spend time with his wife Laina and their five children: Abi, 15; Noah, 13; Dane, 7; and twins Rhett and Beau, 6. He decided to enroll at BCCC, at first in the welding program. He also stepped into a new position at Food Lion: cashier. Being a cashier meant that he could have the time needed to take classes at BCCC and to focus on his studies instead of his responsibilities at work. He started spending more time at home with his family.

Stepping into the role of cashier from assistant manager meant that he had to let go. He had to stop trying to control situations that were no longer his responsibility. He worked alongside other BCCC students who were also juggling positions at Food Lion. Squires thinks the other employees who are enrolled at BCCC are already on the right path. While there are many advantages to moving into management positions at Food Lion, he thinks a degree under their belts will help them in the big picture.

The transition to part-time work and college was made even more challenging when during his first year at BCCC, the Squires lost their home in Whichard Beach to a tornado. They also lost a dog. "We were picking kids clothes out of the briar patch," he said, clearly still haunted by the disaster. He says they were fortunate to have the community help out, but the devastating loss affected his grades. He knew he and to preserve through it, but he was ready to withdraw from school.

"To this day, I still walk around the house looking for a tool, and then remember that I don't have it anymore," he recounts.

He says the Twin Lakes community was wonderful by helping with a fundraiser. "I've always been raised to take care of myself-to pay my own way. To accept people's help was a learning experience. The community here went out of its way to help people, which is different than other places I've lived."

The family recovered from the ordeal and Squires went on to receive the David Clark Scholarship. That scholarship is available through the BCCC Foundation for students in the Industrial Technology program. He is grateful to the Foundation staff for their help.

He took Machining 111 with Matthew Lincoln, who would eventually coax Squires into enrolling in his Mechanical Engineering program. Lincoln's connections to local employers helped land Squires a position at Oak Ridge Industries last October which will become full-time when Squires graduates this May. He plans to continue his studies at East Carolina University in the industrial technology program in the form of night classes.

The position at Oak Ridge has meant he has more time to be with his family. The grocery business is often at its busiest on weekends, nights and holidays. Squires likes having the time to attend baseball games.

Attending BCCC also allows Squires to bond with his family in a different way. The Squireses are now a multi-generational BCCC family. His oldest daughter, Abi, 15, attends the Early College High School at BCCC. Squires can pick her up from school and makes a point to have lunch with her on campus when possible.

As Squires graduates this May, his story-disasters, dreams and everything between- is a testament to how BCCC can be where students can find themselves, their place in the world and their families.