It's the kind of excitement and activity that the teachers want to create for their students when they return to school in late August.

"I want to be able to have the resources to engage kids to explore the outdoors and get out of the classroom," said Brittany Daniels '16, who will be teaching fourth grade at South Greenville Elementary School for the first time this fall. 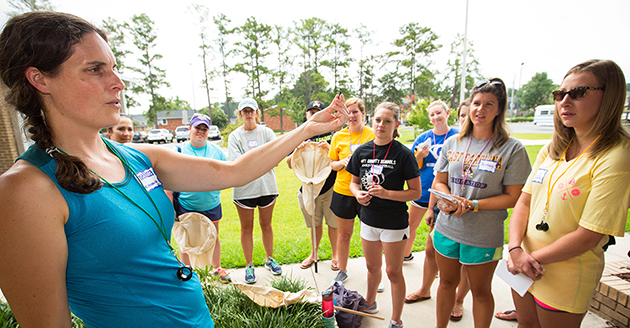 Daniels was among 15 recent ECU graduates attending the free workshop designed to give new teachers confidence and support and improve elementary science education. Some will begin their teaching careers this year while others have been in the classroom less than a year or two.

"Fifty percent leave teaching by the five-year mark," said workshop organizer Dr. Tammy Lee, assistant professor for science education in the ECU College of Education. "We want to help them stay in teaching and not leave the profession."

ECU is the only university in the state that offers a concentration in K-6 science education in its education degree program. Started in 2012, enrollment in the concentration has grown from seven students to more than 100.

"It's one of our missions in the College of Education to continue to work with alumni in the field and with new teachers in professional development," Lee said. Faculty members in the college's six academic departments work regionally and statewide providing workshops, seminars and support to school districts and teachers, many of whom are Pirate alumni. 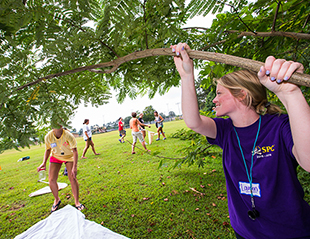 Teacher Lauren Brewington shakes a bush to collect items for further study.
Daniels, whose first day at South Greenville Elementary will be Aug. 18, said she completed the additional 18 credit hours needed for the elementary science concentration because "it wasn't a subject I was as confident in" as others, she said.

Now she's looking forward to her first day, and incorporating music into lesson plans on the ecosystem, rocks and other topics. "We talk about how we think a wave would sound," Daniels said. "The kids can remember the beat and the sound of the waves."

Research shows that if children are exposed to science concepts early, they stay interested in the subject, Lee said.

"The whole gist is to lead students to STEM careers," Lee said. "We want to get students interested and motivated in science at an early age."

Partnering in the workshop was the N.C. Museum of Natural Sciences' Melissa Dowland and Megan Chesser. They guided the teachers around the Eastern Elementary School campus on Aug. 1, listening to cicadas and bird calls, to get them thinking about how to adapt their own school grounds for teaching science outdoors.

"Some of your students might not have a backyard or their parents might not want them to go to a park nearby," said Chesser, teacher education specialist at the museum. The school day might be their only opportunity to get outside, she said.

Using loupes, bug boxes and sweeper nets, teachers practiced their observation and identification skills. By the end of the week, they wrote three lesson plans to implement in their classrooms before Christmas break.

"We want their lessons to be very hands-on and student-centered," Lee said. "We want the students to be practicing science and discovering science." 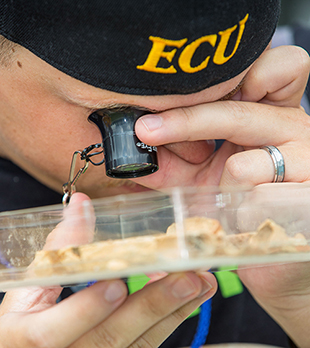 Workshop participant Evan Hamilton uses a loupe to examine part of a mud dauber nest.
Amanda Mongillo '15, a sixth grade teacher at W.A. Pattillo Middle School in Tarboro, has been teaching since her December graduation. Since Mongillo hasn't had a full year in the classroom, she's looking forward to creating "something I haven't been able to teach before" which includes designing a lesson plan on ecosystems.

She said her students love going outdoors, where they have held relay races mimicking sound waves and scavenger hunts to identify leaves and trees. She got interested in science as a kid, with the influence of her dad, as they bonded over school projects like a homemade telescope or the classic potato light bulb.

Lee said the workshop shows teachers how to institute methods and strategies that are research-based, how to overcome barriers like a lack of resources or equipment, and inspire their work with elementary students.

"We're teaching them how to take kids outside and how to utilize the outdoors (in their lesson plans)," Lee said.

The teachers spent one day at Eastern and the rest of the week at River Park North, where ECU microbiologist and assistant professor of biology Dr. Ariane Peralta led some of the sessions.

The workshop is funded by a research start-up grant funded by ECU titled PIRATES (Preparing and Inspiring Achieving Teaching Excellence in Science) and led by Lee, who spearheaded the development of the elementary science concentration to improve STEM education in the early grades. Each participant received a stipend to attend.