Behind the Grades | Beaufort County Now | It's back-to-school time and parents everywhere want not only to encourage their children academically, but also want to know how their child's school is performing.

It's back-to-school time and parents everywhere want not only to encourage their children academically, but also want to know how their child's school is performing.

By far the category drawing the most interest is school performance. Legislation authorizing the report cards called for the North Carolina Department of Public Instruction to ascribe an A-F letter grade to all public schools. Grades are based on an analysis of growth and performance on state end-of-grade and end-of-course test results, results that are aligned to North Carolina Standard Course of Study in English Language Arts/Reading and Mathematics for all public schools and public charter schools. 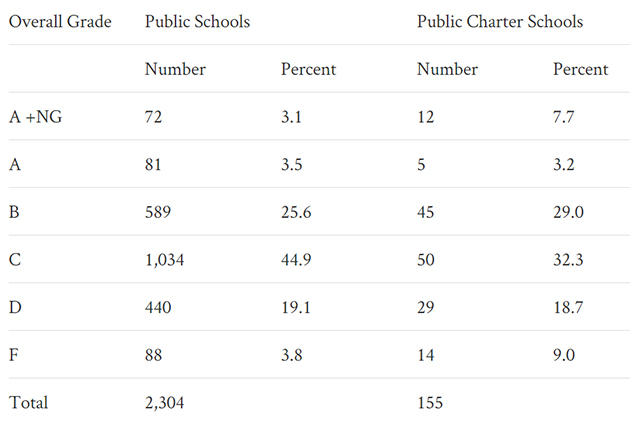 A+NG - for schools that earn an "A" designation but also do not have significant achievement and or graduation gaps.

Table is from 2015-16 Performance and Growth of North Carolina Public Schools, Sept, 1, 2016. Available at: http://www.ncpublicschools.org/docs/accountability/reporting/exsumm16.pdf

In my view, school report cards are a helpful - albeit imperfect - tool for parents who wish to evaluate educational options for their children. To that end, the North Carolina Department of Public Instruction (NC DPI) has made available online an overwhelming amount of information on school report cards. It's very easy for parents to get lost in the numbers.

Not All Schools Are Included: This year's report card only includes schools that were open during the 2014-15 school year. New schools will be included when the next report card is issued, in fall 2016. In addition, in order to be included, schools must meet participation requirements. What does that mean? Schools must have assessed at least 95 percent of their eligible students in the following groups: all students; American Indian; Asian; black; Hispanic; two or more races; white; economically disadvantaged; limited English proficiency; students with disabilities; and academically or intellectually gifted. About 13 percent of North Carolina schools failed to meet participation requirements.

Grade Calculations: School grades are calculated by a composite of achievement scores and growth. Grades are based primarily on overall proficiency levels on the state's standardized end-of-grade tests and end-of-course tests. Eighty percent of the grade is for the percentage of tests earning a score considered grade-level proficient; 20 percent is for growth, measured by a statistical model that compares each student's predicted test score, based on past performance, against his or her actual result.

Critics say the methodology tracks with income and puts schools with high percentages of low-achieving students at a disadvantage. Even if schools do a good job of "growing" students, because of the weighting factor the growth will not likely be reflected fairly in the overall grades.

Its true bills were introduced in the most recent legislative session to change the percentages, but none of the bills reached the floor for a vote. If the legislature decides to change the percentages and place a greater emphasis on growth, proponents of proficiency testing might argue that the revamped measure fails to measure what students are actually learning.

Progressives claim that grades merely reflect income, provide no new information, punish the poor, and only make a strong argument for more funding. Such thinking is misguided. North Carolina already employs various funding formulas and academic programs intended to assist low-performing schools and disadvantaged populations. To look only at income is to ignore other factors that significantly influence school performance, such as family well-being (See: ) and the health of our culture.

Fear among educators and policymakers that the grading scale would result in too many schools being labelled as failures caused the legislature to delay implementation until schools could adjust to the different scale. No matter the reason cited, it's hard to get around the fact that grades have been readjusted - lowered - to improve overall results.

You hear no one discussing the decision by the State Board several years ago that students who scored at Level 3 proficiency were determined to meet grade level proficiency. The change in the "no gaps" scale lowers the floor for failure from below 70 to below 40. This is tantamount to moving the goalposts closer for many students, students who otherwise wouldn't have been deemed proficient. It is hard to look at this as anything other than a massive dumbing-down of the curriculum. Weren't we told Common Core Standards - which have been taught in the public schools since 2012 - would result in higher test scores and deep learning? The decision to adopt the new 10-point grading scale facilitates the entire process but only masks far deeper problems.

Recent data regarding community college remediation rates is troubling. A 2016 report by the NC Community College System revealed that 68 percent of community college students require at least one remediation class.[1] In October of 2015, Terry Stoops of the John Locke Foundation reported that 42 percent of recent high school graduates enrolled in one or more remedial or "developmental" math and/or English courses at a North Carolina community college[2]. Yes, the figures appear to be declining. However, whichever figure we focus on, they seem to indicate while more students are graduating, too many students are still unprepared for the world of work or higher education.

So how are public schools doing? The State Report Card provides an imperfect snapshot of public and charter schools in North Carolina. You can mine more specific data here. Some major highlights of this year's report:


Two points are worth noting. First, these numbers represent slight improvements over last year. Still, it's good to compare North Carolina results with results from other national tests such as the National Assessment of Education Progress (NAEP), ACT or the SAT. If North Carolina students are performing well on state tests, those results should be validated by favorable results on national tests like.

North Carolina scores on the national standardized curriculum achievement test called the ACT are below national averages and largely unchanged from last year. The ACT tests English, reading, math and science. The highest score on each test section is 36.

Among the states where all students take the ACT, North Carolina scores were among the lowest.

NC Report Cards are an important - albeit imperfect - tool for parents to evaluate the quality of their child's local school. To fully understand the information NC DPI provides, parents need to understand what data is used, how grades are derived and how they can be compared with results. While it's true that a number of districts dislike the process of grading schools, these schools have also taken to providing parents with additional information on school performance and their district. Parents and those who support public education should be encouraged by such developments. Only when parents truly understand all that lies behind school performance grades will the true ends of its enabling legislation - aiding parents and increasing transparency - be considered accomplished. Let's work to make that a reality.