The number of computer science majors who are female is relatively low, but it's still higher than when Angela Allen was a student at ECU more than three decades ago.

"There were a few, I can't remember how many, but there were less than 10 ... there were very few women," said Allen, a 1982 ECU computer science graduate and retired IBM executive who lives in Raleigh.

"We have 56 women out of 450 undergraduate students, so currently, it's about 12 percent. ... Ideally we would like to see 50 percent women in computing," said Dr. Venkat Gudivada, chair of the ECU Department of Computer Science. "I'm making a very personal effort to reach out to these students in high schools and try to propagate the message that computing is all about helping humanity. It's not about coding."

In fact, Gudivada and five ECU computer science students are reaching out directly to high school students with the help of Google. 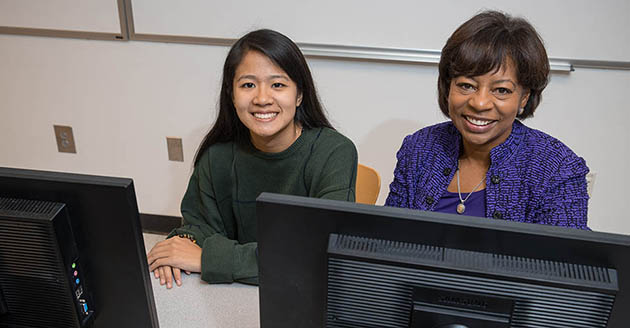 The group won the "igniteCS" award from the tech giant to work with three Pitt County high schools ­- JH Rose, DH Conley and South Central - to attract more students to computing. The students and their faculty advisor will work with the computer science teachers in the high schools to provide instructional materials and develop computing projects.

Alston and Nguyen said they think one of the reasons more women aren't in computer science is due to the stereotype that the computer industry is filled with men who code all day in a dark room by themselves.

"Being a woman in computer science, I can break people's expectations of things," said Nguyen, who is a first-year student and an EC Scholar. "People might expect you to be the quiet, reserved kind of person when you're in computer science, but I like to interact with people. I like to do different activities. I'm not just confined to math and science; I enjoy music, writing, reading different things, sports." 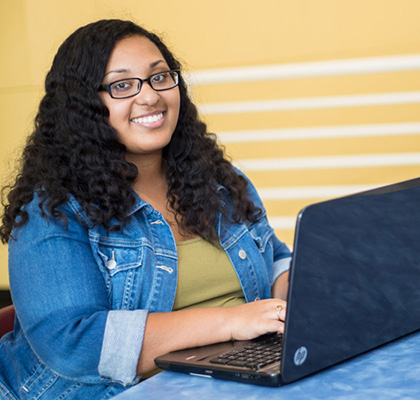 Since women are a minority in computer science, Gudivada feels companies and employers target such graduates to not only make their workforce more diverse, but also give them a different perspective.

"They (employers) really like to hire as many women as possible." Gudivada said. "I think they bring a certain dimension that actually complements, whether it's in the analysis or in the design, so you want to include a woman because they bring a valuable contribution to the workplace."

"There's over a million jobs for technologists in computer science," Allen said. "A million jobs - that's a lot of opportunity. It's not just in traditional technology companies; it's in every company. They need people who can bring technology to their thinking."

Alston transferred to ECU after deciding she wanted to work in computer science, she said.

"I chose ECU because I felt that the program was going to challenge me," Alston said. "They talked about what kind of things we could be working on and what kind of resources they have for us as far as how we can succeed after graduation, so I thought that was fantastic."

Neither Alston nor Nguyen know exactly what they want to do with their future computer science degree. Nguyen is leaning toward something in medical research. Alston is exploring internships to help her figure out which direction she would like to go. In addition to Alston and Nguyen, Matthew Bent, Seaver Thorn, and Maysun Dietrich received the Google grant.

"It's not about what I am, but what I can bring - I can't just sit here and 'milk' the situation that I am the female in computer science. ... I have to always be on my toes no matter what," Alston said.


For Alston, Nguyen and others interested in computer science, all they have to do is look to graduates like Allen to see the opportunities available in the robust field.

"I got an excellent base in computer science here at East Carolina. I've matched my degree to many other people in a large, vast company that I worked in, and they came from various schools," Allen said. "When I think about what women can do with a basis in technology, the world is open to them."