Election 2016: The Choice for President Is Clear | Beaufort County Now | Donald Trump is tireless and determined. He is committed to the movement, a grassroots movement, which wants to clean up government and make it work FOR the People and not against them.

Election 2016: The Choice for President Is Clear

Login to Send a Private Message to Diane Rufino
Donald Trump is tireless and determined. He is committed to the movement, a grassroots movement, which wants to clean up government and make it work FOR the People and not against them. Government doesn't know better, it doesn't spend MY money prudently OR constitutionally, it is frustrating the American Dream this country once offered to people willing to work for it, and it certainly doesn't have the American family, America's communities, and the safety and well-being of its citizens at heart. Too often global interests, foreign policy, voodoo science (ie, offered to support certain business opportunities and interests), and incomprehensible deals take precedence over American interests. AMERICA FIRST! Donald Trump has proven to me his level of commitment and has shown me how hard he is willing to work. I hope he will be our next President. My concern is whether people will understand the stakes of this election and rise to the occasion, and in all honesty, act in thought and deed as our Creator made us -- as individuals. We are not political pawns, to be bought and sold for the greater good of a political party which is run by entrenched political elites. 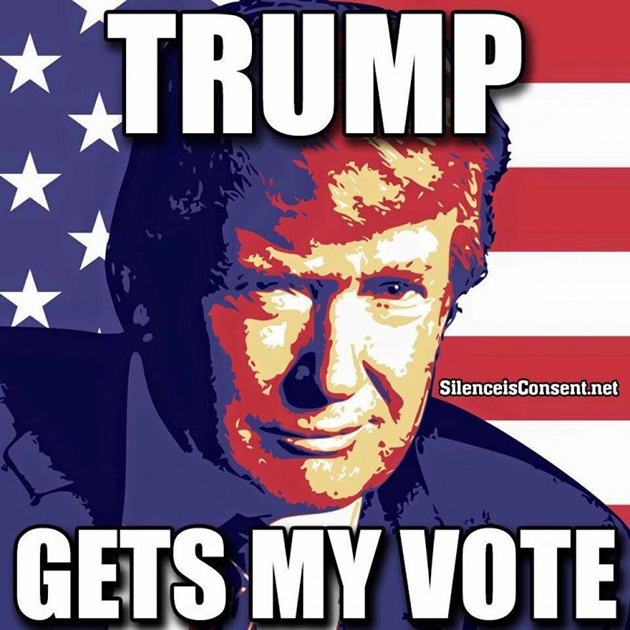 For a moment, put the "R" and the "D" aside and use the noggin that God so generously gave us. There are at least two glaring differences between Donald Trump and Hillary Clinton and if these two critical differences don't seem to have an impact on your choice for president, then shame on you. Your vote determines the strength of our Constitution and the size and nature of our government. Your vote protects our country or erodes it. In short, your vote ensures the security of the country that thankfully (although no longer realistically) still claims the glory and reputation of men like those who fought WWII - ones who defended the freedom given to us by our forefathers and fought for our safety and security. We want that country back. We need that country back.

First, Donald Trump is running for YOU, the American People. There is no doubt about that. He has willingly allowed his faults and his failings and the embarrassments of his past to re-surface, to embarrass his family and to taint their name. He has been willing to take the criticisms and insults of the entirety of the political system (the Democratic Party, the Media, and the Republican Party too), as well as the false allegations that have hurt his reputation. When he could be sitting back and enjoying the fruits of his labor and investments, spending time with his beautiful wife and young son, doting on his many grandchildren, and relaxing at his home in southern Florida, he has volunteered to give all that up for a movement that he believes in and which he believes will right the wrongs in this country which have translated to the mistreatment of the American people in general. Hillary Clinton, on the other hand, is running for HERSELF. She is an overly-ambitious and career politician who believes she is entitled to the office. To her, it is not about the people or the country but about the historical distinction of being the first woman president. It is about ego and power.

Hillary has been plotting this election for a long time. She played the system and played the American people. When she lost the primary election to Barack Hussein Obama in 2008, she made an agreement with him and maybe even with the corrupt Democratic Party. If she would help get Obama elected, it would be her time in 2016. And the Party would support her. She would be made Secretary of State and have the credentials to seek the office of the presidency. But what we couldn't have imagined is the corruption, the deception, and the ambition she would bring to her position in the State Department in order to advance her plans for the presidency. She cashed in on her "favors" from her husband (for sticking by him and helping cover up his numerous sexual abuses of women as president) and together, she and Bill established the Clinton Foundation. The Clinton Foundation would be the vehicle by which Hillary would raise the money she would use to "buy" her the election. As Secretary of State, she repeatedly put the interests of herself and her plans for the presidency over the interests of the country with respect to national security. She sold national secrets and national interests to the "high bidders" on the national scene looking to make certain deals that would either benefit themselves, their companies, or their countries. Our national interests and our national security were subject to her "pay-for-play" schemes. And the money began rolling in - millions and millions and millions of dollars - all into the elicit Clinton Foundation. That is why she had her email set on her personal server. That is why she conducted State business out of her own personal server and not subject to the "eyes" of the federal government, as required by federal law. The government, the American people, could never know what she was really doing as Secretary of State. how she was using her clearance and her power, and what she was doing with classified national security information. The men in Benghazi had to be left to perish because she was conducting business there that could not be exposed to the American people.

After she stepped down as Secretary of State (and I'm not sure if it was because of the "fall" she took which so very coincidentally robbed her of her memory), she and Bill had made a fortune through the deals and the speaking fees and the "one-on-one meetings" and the "face time" with Bill or Hillary and whatever else that they offered to rake in the money. When it came time for the primary election season, she showed the Democratic Party that she is a proven money-maker. She wouldn't need much money from the national Democratic Party because she had already raised so much. And we all know that money is at the root of all politics. And so the party embraced her and did all it could to ensure that she became the party's candidate for president. That is why we heard Debra Wasserman Schultz and the rest of the Democratic Party communicate through emails how they would discredit Bernie Sanders and hurt his chances in the primary. They didn't expect him to do so well and they couldn't allow it. It wasn't part of their plan. With all the money raised - MISAPPROPRIATED from the State Department - Hillary bribed the media, the manufacturers of the voting machines, and probably even several Republican members of Congress. With so many things taken care of, she just had one minor problem... how to get away with all her criminal activities. How will she get away with all the laws she willingly and intentionally broke? Well, that was easy. She used her influence (after all, the system had already determined that she WILL be the next president of the United States) to shake down the Justice Department (I mean, apply pressure that only the Clintons know how to apply). The meeting between Bill Clinton and Loretta Lynch for 45 minutes while she was waiting on her plane was no coincidence. And it wasn't for the opportunity to talk to her about golf and grandchildren.

If you think she acted appropriately when Secretary of State or in her use of the Clinton Foundation, just ask yourself why has the FBI done an about-face and has decided to move the investigation of Hillary Clinton forward. It's because the agents of the FBI know that there is more than enough evidence to conduct an investigation, enough so that an indictment will be likely (otherwise it would NOT have made the decision to re-open the investigation with 11 days to Election Day; it would have waited until after the American people have casted their votes), and that a miscarriage of justice was done the first time when FBI Director James Comey recommended that no investigation be conducted. The FBI, an independent agency of the Justice Department, by-passed the Oval Office (Obama) and the Justice Department (Loretta Lynch) in issuing its letter calling for the new investigation which shows that the office is trying desperately to restore confidence in its reputation and to restore faith and confidence in its ability to gather facts, conduct investigations, uphold the rule of law, and to seek justice. With its letter of October 29, the FBI is telling the American people that they MUST NOT elect such a corrupt individual, such a flagrant and unrepentant law-breaker, such a willfully abusive politician to the highest office in the land.

SECOND, and just in case you question the motives and sincerity of the two presidential candidates, just look at how each are funding their campaigns. Donald Trump is funding his campaign with his own money. He is criss-crossing the United States many times a day (sometimes 4 and 5 times) to meet with voters and share his plans to Make America Great Again --- all on his own dime. He is running his campaign, in charge of his own fundraising, hiring his own security, and arranges his own venues. He owes no one anything.. EXCEPT for the American people who are the ones who have put wind in his sails. They didn't have to do it. They could have sat back, complained that they didn't get a polished candidate, and taken their chances on Election Day. He is not bought by any special interest groups and is therefore not controlled by any. He is not a puppet of the Republican Party because although he is running as that party's candidate, he is doing it HIS way, with his own money. Hillary Clinton, on the other hand, could have used the money that she and Bill made in books and speaking fees and other deals to fund her campaign (after all, their net worth increased exponentially in her years as a "public" servant) but instead, chose to accept money from special interests, including foreign interests and most clearly, from the rich and powerful bankers and investors on Wall Street. If anyone dares to question whether contributions buy influence, all he needs to do is look at the speeches given by Hillary to those bankers and investors, which were released by Wikileaks. In those speeches, the "real" Hillary for president was exposed to the American people. She would have two sets of policies. One she would share with the people (and they would believe, just like everyone believed Obama) and the other would be the real policies that she would make for the benefit of the rich and powerful political elites.

Hillary Clinton is as corrupt and as ambitious as it gets. The shocking degree of her ambition alone should scare every voter. She is already prone to the type of evil that has motivated her to the heights she is now. Once in charge of all the instrumentalities of government, once able to wield the full power of the federal government, and once able to exert the influence that only the highest office in the land can exert, I can't imagine what she could be capable of.

Donald Trump may not always "talk the talk" of an ideal candidate, but he certainly "walks the walk." I believe this is the Donald Trump that Americans first took notice of, the man they believe can Make America Great Again, and the man they trust to lead the country and to do the right thing for all of our country's people.