It's Kind of a Funny Story | Eastern North Carolina Now | Recently, I reviewed "The Beaver," which was a purely dark comedy regarding the debilitating effects of chronic depression, resulting in severe schizophrenia. "It's Kind of a Funny of Story," which dealt with institutionalized mental health patients, was much lighter fare.

It's Kind of a Funny Story

Simple Teen Angst Can be Cured

Recently, I reviewed "The Beaver," which was a purely dark comedy regarding the debilitating effects of chronic depression, resulting in severe schizophrenia. "It's Kind of Funny Kind of 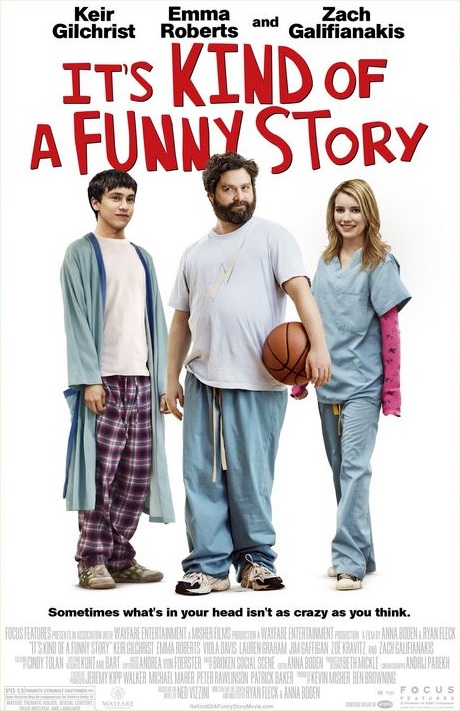 Story," which dealt with institutionalized mental health patients, was much lighter fare. It also had a profound message.

Directors / Screenwriters Anna Boden and Ryan Fleck employed the good message from the Ned Vizzini novel, "Be More Chill," to project the often undiagnosed reality that you may survive your own adolescence.

In fact, my wife, after viewing this movie, commented that "It's Kind of a Funny Story" should be a required assignment for all teenagers, who stress too much over their most uncertain future. I agree, but with one caveat: It should be routinely shown only to children that strive for a constructive future, who consequently know too much stress. Sadly too many teenagers don't strive and stress enough.

Regardless of that undeniable reality, this film is about a 16 year old adolescent, Craig, played by Keir Gilchrist, who is interminably stressed about a number issues, chief among them is his uncertain acceptance to a prestigious summer school sponsored by Bill and Melinda Gates. It not only drives him to distraction, it drives him to dream a fantastic scene, whereby he flings himself off of the Brooklyn Bridge. Awakening in a cold sweat, Craig instinctively peddles himself (on his little kid bike) a few city blocks (Brooklyn, NY) to the psych ward, in the community hospital. At this point, Craig becomes engaged in a profound transformation, not entirely of his own making.

Once Craig is admitted, he instantly senses that he has made a big mistake. For the first time in his life, Craig comes face to face with schizophrenics, chronic depressives, and is roomed with a middle-aged nationalized Egyptian, who will not leave his bed, except to relieve himself. Instantly, Craig's problem of merely having a bad spell at school is greatly diminished by his new reality. 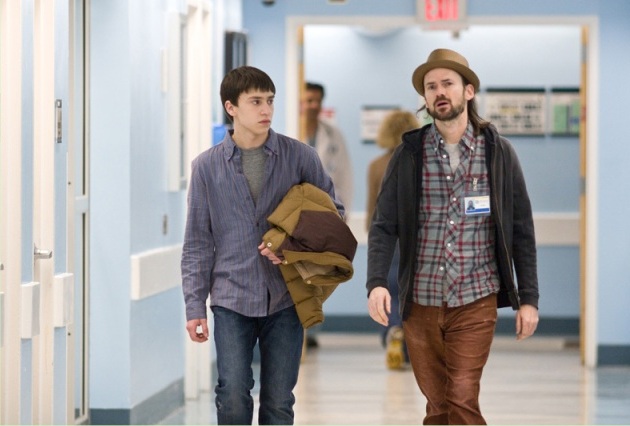 Craig walks the hall of the psych ward for the first time with Attendant Smitty, Jeremy Davies (remember Cpl. Upham, from the classic "Saving Private Ryan): Above. Craig pleads his case to his attending physician, Dr. Eden Minerva, played by Viola Davis, that he made a big mistake seeking his own admission to the psychiatric unit: Below. 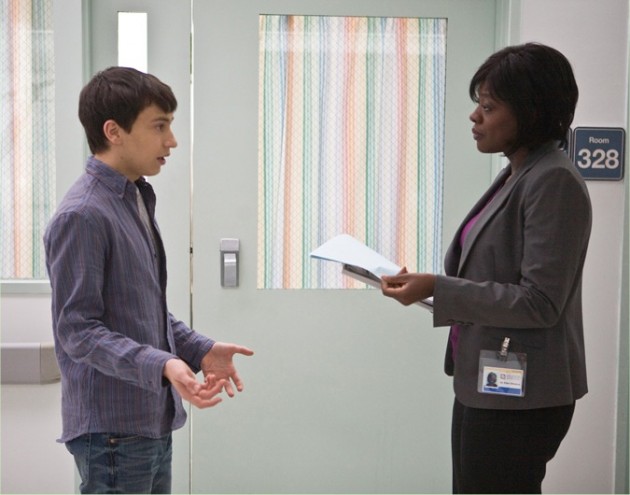 Craig soon discovers, there is no respite from this new reality. Dr. Minerva kindly informs the lad that his stay will be a minimum of five days to 30 days maximum. It appears that these folks take the threat of teenage suicide most seriously. Craig's predicament is running from bad to worse.

And then he gets to know Bobby, played by Zach Galifianakis, who actually hails from Wilkes County, North Carolina. 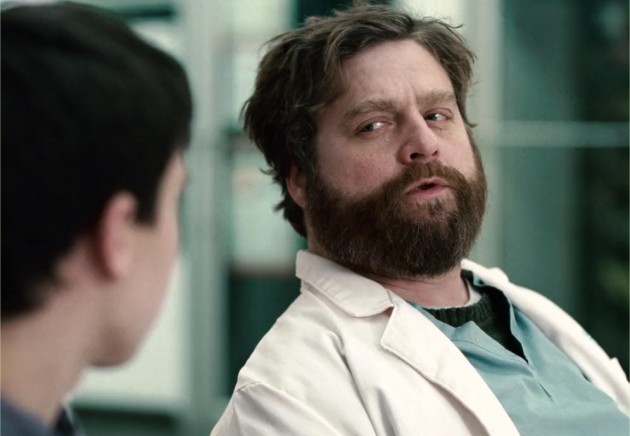 Craig meets Bobby, who has has just slipped away from the psych ward for a better cup of coffee in the admittance lobby: Above. Bobby making his rounds with his entourage in tow. The young girl with the self-inflicted cuts on her pretty cheeks (right) is Noelle, played Emma Roberts (Eric's daughter and Julia's niece): Below. 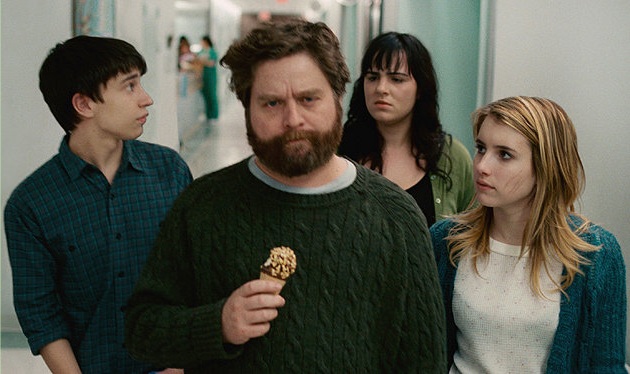 Bobby appears normal, nice, but eccentric - almost Zach playing himself. Bobby befriends the youngster, takes him under his wing, and personalizes Craig's new life with the "crazies." Are the inmates in charge of the asylum? No, but Bobby likes to project that appearance.

What Craig does discover about these inmates, in this particular asylum, is that each are individuals, some with severe dysfunctional mental disorders, but others with stress related issues, like himself. The potential difference; however, is that they just never learned how to deal with their foibles by gaining some measure of control of their respective realities.

At this juncture, the story takes the turn to ask the question: Does Craig, who is so representative of young, bright, ambitious and similarly stressed adolescents, seize control over his inner demons, and learns to function in both his world and ours? 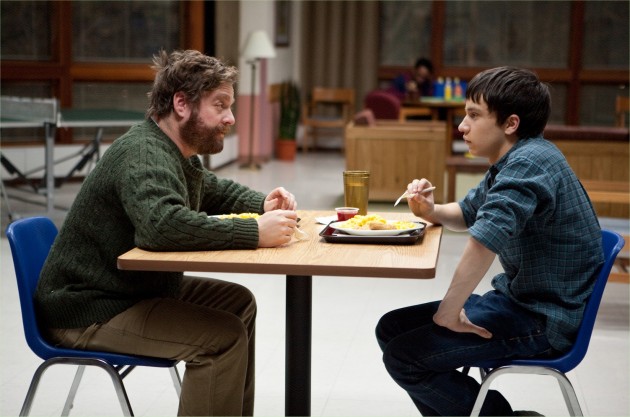 Here, Bobby takes a sincere interest in Craig. It is as if Bobby might reclaim some measured loss from his past misspent life through Craig, who has adapted to this new, and very strange environment in a very healthy manner: Above. Bobby under the functional effects of the "meds," which reinforces the fact that life is rather controlled on the floor of any psych ward, regardless of how one attempts to normalize it: Below. 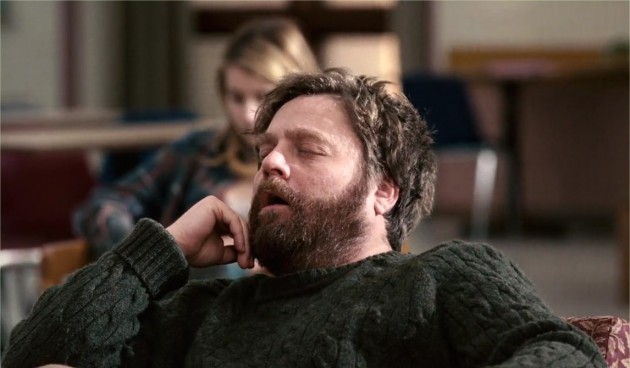 In a story, such as this, that is driven by rich characters, it is essential that they be developed through strong dialogue and competent actors, which was the eventual strength of film. At the hear of that singular strength was the relationship Craig and Bobby. On many levels, it not enhances the structure of the message, it drove the story of the film, best exemplified by Bobby's heart rendered life opinion to Craig:

Keir Gilchrist, as the innocently aware Craig, just nailed his role, which was essential for the film's success. Zach Galifianakis, as the affable while cynical Bobby, has the uncanny ability to project the real emotions of real people. I usually don't trust quirky stand-up comedians, like Zach, to find that vein of real sentiment of expressed ego laid bare, but he posses a seemingly effortless, idiot-savant capacity to achieve this thespian feat of remarkable skill. 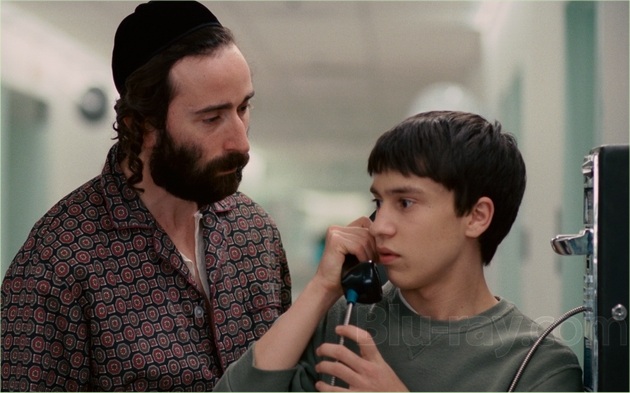 Considering the fact that the societal atmosphere of any psych ward would be awash in rich character studies, "It's Kind of a Funny Story had more than it's share of material. Like Sol (Solomon) here, who was once the ring leader of the Hasidic acid head crew, and after overdosing on 100 hits of blotter, has now developed an extreme aversion to any sound: Above and below.

"It's Kind of a Funny Story" is at its best, when it shows this abnormal environment in the most normal of terms possible. Consequently, the film is successful, in drawing one into this story of many different stories, and therefore makes the characters real, not so invented as mere props to project some deeper meaning. The deeper meaning is, however, how intertwined we all are: the sane, the insane and all the rest of us in between - diagnosed or otherwise not.

For a story so similar in atmosphere to the classic film, "One Flew Over the Cuckoo's Nest, there are most dissimilar results. Like my wife commented about this film, it "should be a required assignment for all teenagers." The message: We all have individual and deep, remarkable problems. Deal with them, and as soon as possible.