State Military Commission Blocks Discussion Of Wind Farm At Public Meeting | Eastern North Carolina Now | The chairman of the N.C. Military Affairs Commission refused to allow a presentation at an open committee meeting Tuesday because a Carolina Journal reporter was in attendance

Published: Thursday, February 9th, 2017 @ 7:32 pm
By: John Locke Foundation   ( More Entries )
Publisher's note: The author of this post is Dan Way, who is an associate editor for the Carolina Journal, John Hood Publisher.


The chairman of the N.C. Military Affairs Commission refused to allow a presentation at an open committee meeting Tuesday because a Carolina Journal reporter was in attendance.

The presentation on a controversial wind energy project was on the agenda of the commission's Executive Steering Group. But the commission's chairman, Brig. Gen. Mabry "Bud" Martin, attempted to prevent media coverage of the presentation even though Martin and Larry Hall, Gov. Roy Cooper's nominee as secretary of military and veterans affairs, acknowledged that the session was a public meeting.

The presentation, by wind energy opponent John Droz, would have focused on the Amazon Wind Farm, a $400-million, 104-turbine facility near Elizabeth City. North Carolina legislative leaders last month sent Homeland Security Secretary John Kelly a letter asking him to consider closing down the operation. They fear that it will seriously degrade the operational performance of a sophisticated radar receiver at Naval Support Activity Hampton Roads Northwest Annex in Virginia on the North Carolina border.

That military facility is a key national security component in tracking aircraft and ships used in drug trafficking. Some critics of the Amazon Wind Farm have expressed worry that its operation could result in the military installation being closed due to the radar interference, harming the local economy.

Droz has spoken out against the Amazon Wind Farm and other wind projects along the coast.

Before Droz's presentation, commission personnel stopped and questioned the CJ staff member outside the meeting room. He was allowed to pass after noting it was an open meeting and, by state law, members of the public could attend.

CJ was the only media organization present at the meeting.

Martin and Hall expressed surprise that a member of the media was present. So were two members of the public who were interested in hearing about the wind farm project. They asked for the visitors to identify themselves to the commission.

Martin acknowledged that the session was a public meeting. But he and Hall said they were unaware Droz had alerted others that he would be making a presentation, and said he should have informed them.

They expressed discomfort about allowing Droz's presentation in an open forum because of the sensitive nature of the topic and its importance to the state. 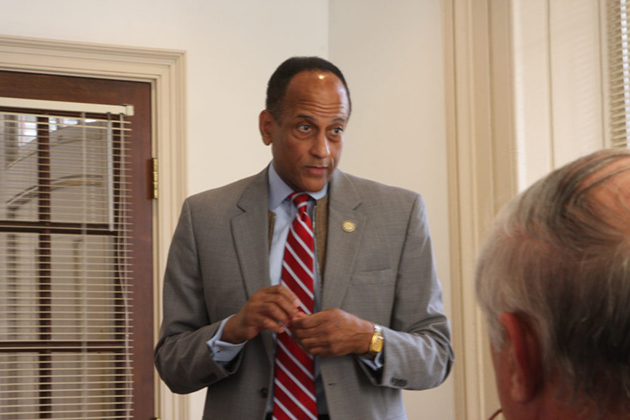 Larry Hall, secretary of the Department of Military and Veterans Affairs, defended Tuesday's decision to remove a report on the controversial Amazon Wind Farm from the agenda of Tuesday's N.C. Veterans Affairs Commission meeting because a Carolina Journal reporter was in the room. (CJ photo by Dan Way)


Martin attempted to place a news blackout on the Droz presentation, asking if an agreement could be reached that none of the details discussed in the meeting would be printed or repeated outside of the session.

The CJ reporter would not consent to that request. Discussion at public meetings by law is open and on the record.

At that point Martin removed the item from the agenda and said he would delay its presentation until a later date that was not specified.

Outside the meeting room, Hall defended the decision.

"I know you want to have the scoop," Hall told CJ.

But he said the commission did not want only one media organization to have exclusive information from the meeting, and that other agenda items could have been reported on.

The Droz presentation may be added to the agenda at a later meeting, Hall said, and possibly at a larger venue to accommodate more media representatives who might attend. He said the commission needs to improve its communication with the public about its meetings and other functions.

Hall, a former state representative from Durham and House minority leader, is scheduled for a confirmation hearing Wednesday before the Senate Commerce Committee.

The commission was created by the General Assembly in 2013. Its purpose is to defend military facilities in North Carolina from encroachment by commercial or residential development; assist active-duty military members, veterans, and retirees with services; and lobby against closing military facilities in the state.
Go Back