Leo Kottke Plays the Carolina Theater in Durham ... For a Short Bit | Beaufort County Now | Leo Kottke has been a personal favorite of mine for decades. The baby-faced acoustic guitar picker, who managed to create his own robust expressive style, has grown older as I have, but, he is still the master, maybe better.

Leo Kottke Plays the Carolina Theater in Durham ... For a Short Bit

Login to Send a Private Message to Stan Deatherage
Billed as "Shut the Folk Up and Listen" ... I did not have to 'shut the folk up' for long.

Leo Kottke has been a personal favorite of mine for decades. The baby-faced acoustic guitar picker, who managed to create his own robust expressive style, has grown older as I have, but, he is still the master, maybe better. Another truth is that Mr. Kottke definitely 'sees his father's thin grin staring back at him in the mirror every morning when he gets up'. 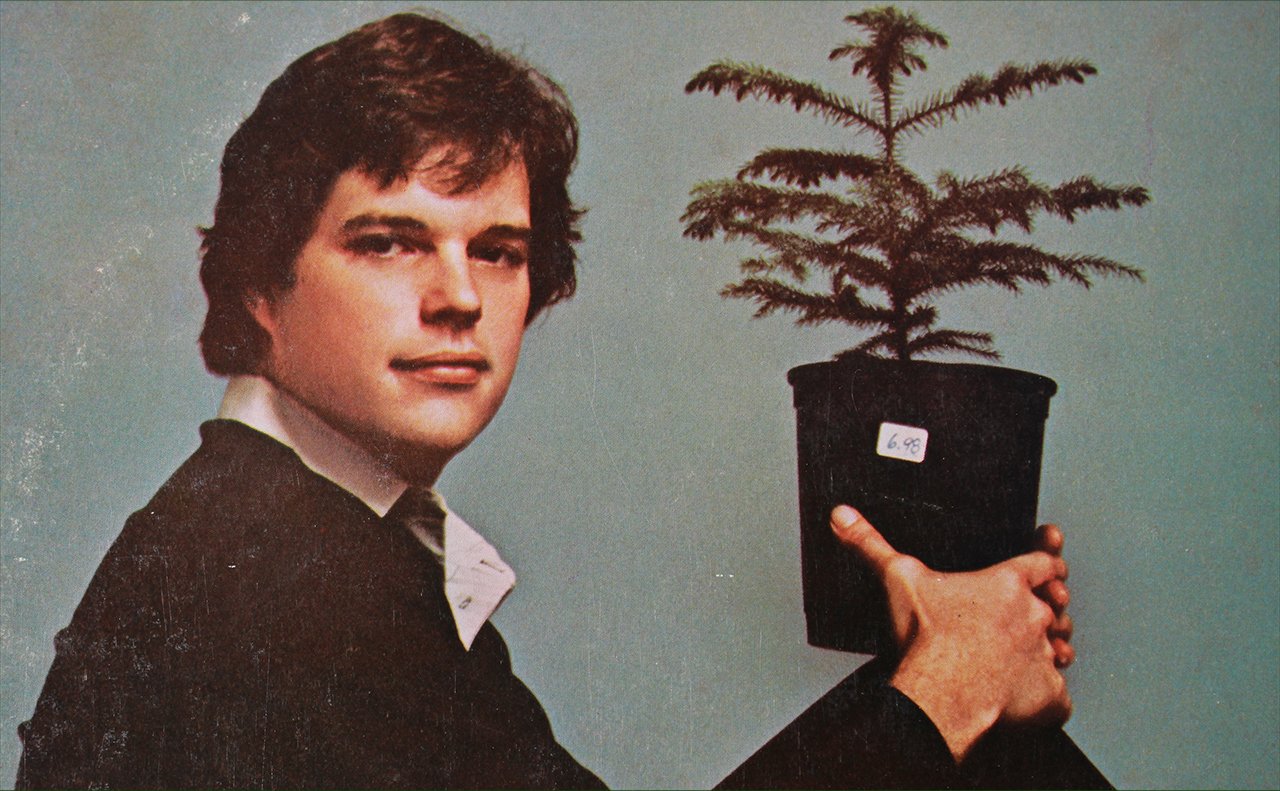 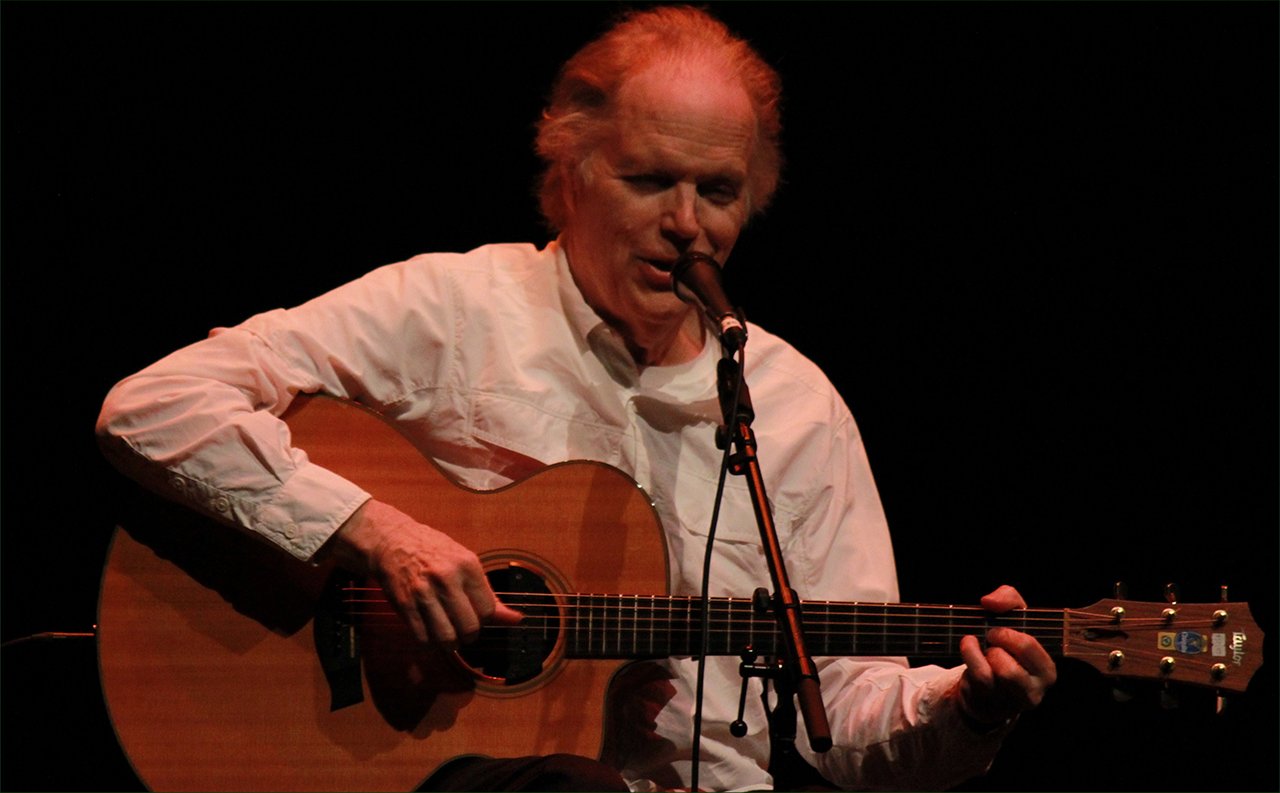 Regardless of the aging process, Leo Kottke seems to have continued in perfecting his relationship with his two instruments of choice: His trademark 12 string guitar, and a Taylor 6 string - the instrument on which he spent most of his time this Thursday night in Durham. Mr. Kottke has also continued in his personal relationship with the audience as well, effortlessly relating his ongoing ethos of his music, his instrument and his moving motive to continue, irrespective of the toll that performing takes upon the performer.

At one point in Leo Kottke's young career, he suffered from severe tendonitis in his picking hand, causing him to abruptly, and with much diligently rearrangement of style to find a new way to play the guitar. Kottke was use to forcefully picking his 12 string with a pick to effect his trademark sound, a sound that often gave one the auditory illusion of playing two, maybe three guitars at once.


Both videos below exhibit Leo Kottke at his prime before the tendinitis, when he began employ a more classical style of picking, where the hand is held more tightly above the strings to be hammered and plucked.


I chose these videos for many reasons, but not least of which is the three vocalized songs are probably three of my 10 favorites by Mr. Kottke: "When Jack Gets Up", "Hear the Wind Howl", "Eight Miles High"; all of which Mr. Kottke did not play in Durham that Thursday night: Above and below.

These great songs did not make the short playlist for this night; however, these tunes may would have if made the list had Mr. Kottke been on stage for more than 50 minutes. The problem here is that Leo Kottke has now been relegated to the back-up guy, the warm-up guy, and at 71 years young, I am convinced that Mr. Kottke could have easily played another 1 1/2 to 2 hours had he been allocated the time. Lord knows, he has a massive catalogue of well honed material. 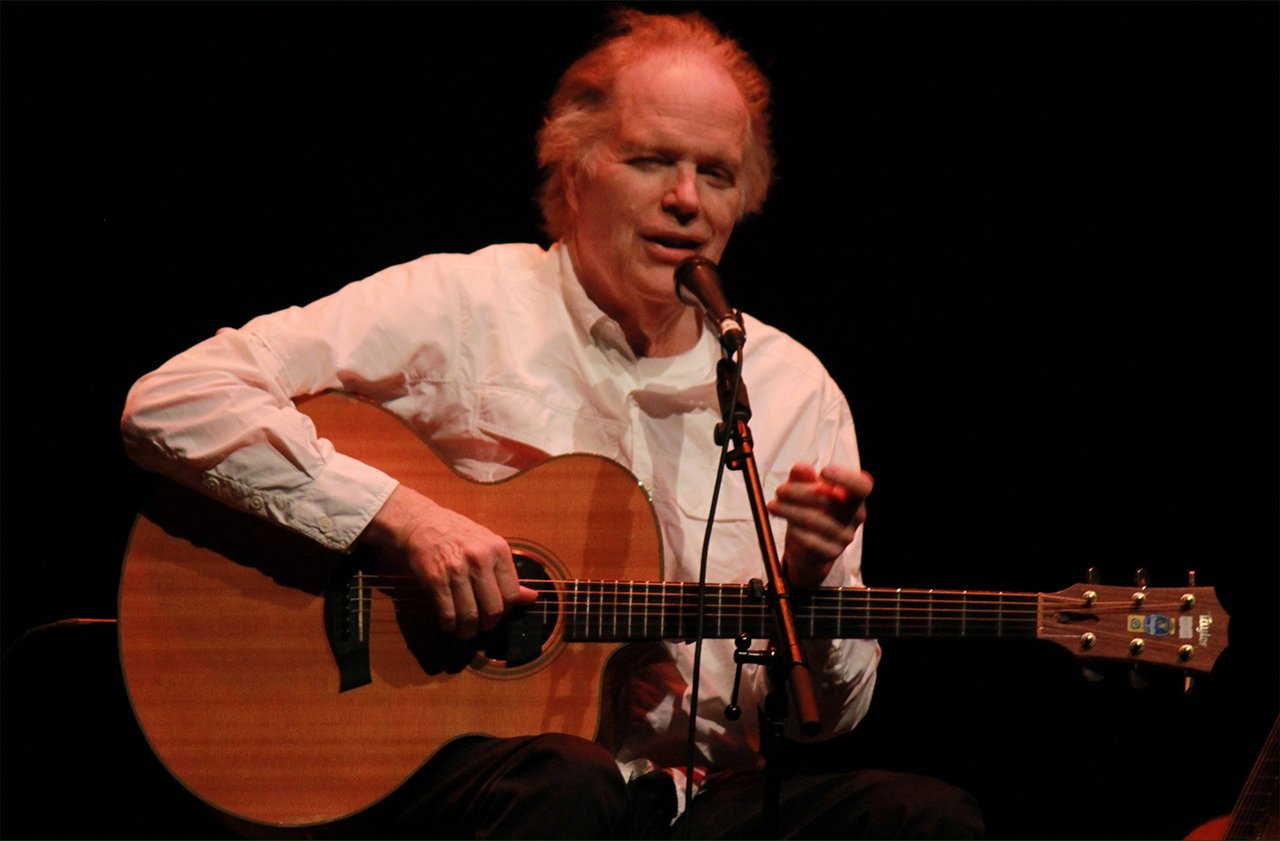 Leo Kottke explaining it all and having fun doing it: Above.     photos by Stan Deatherage     Click image to expand.

Plus, the man has attitude; gleefully, gracefully expressing himself verbally and in melody; at one point admitting: 'You know, this is what I do, I sit and I play this one instrument nearly all the time, and that would be all I would ever care to do, which I once did until I about went broke. Then, I figured, I ought to go out and play for folks and sell some records, and make some money so I can keep doing what I love to do.' 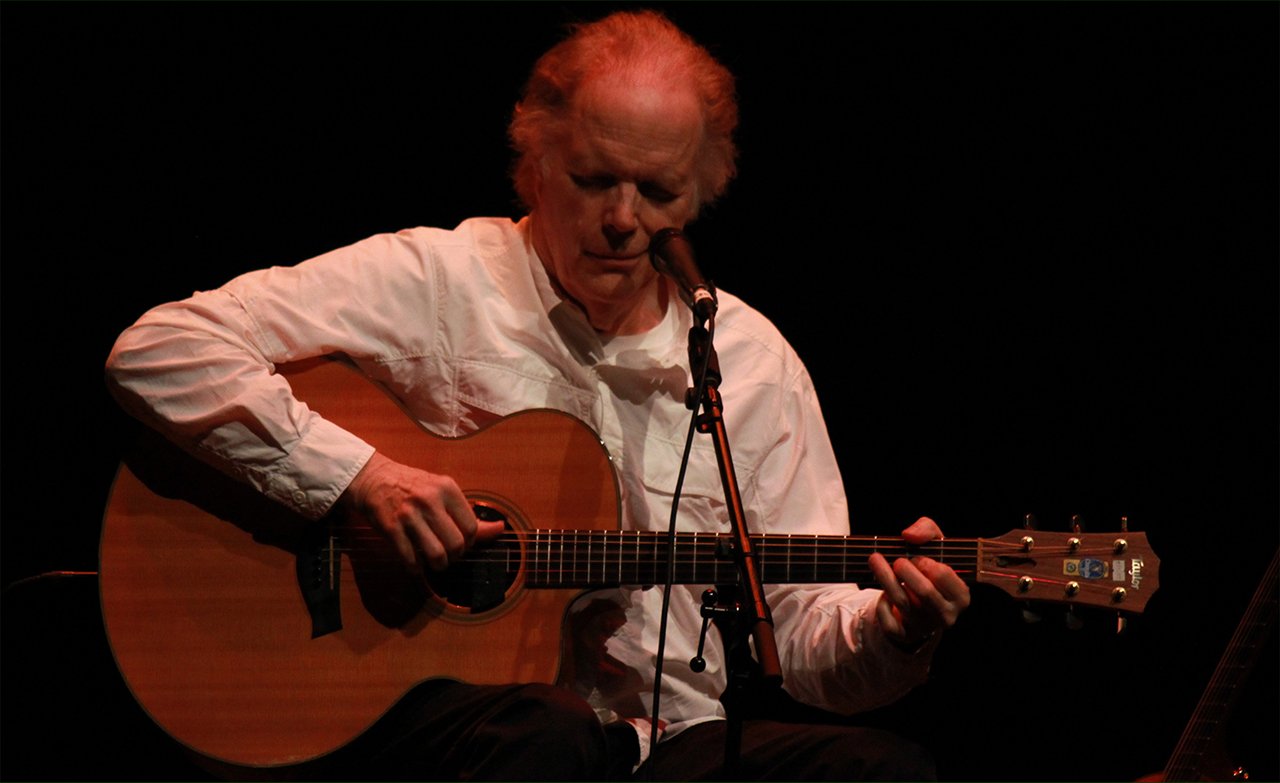 Leo Kottke performed with robust abandon for 50 minutes, and it was wonderful. The crowd loved him and he connected viscerally with the lot of us, and we wanted more: Above and below.     photos by Stan Deatherage     Click image to expand. 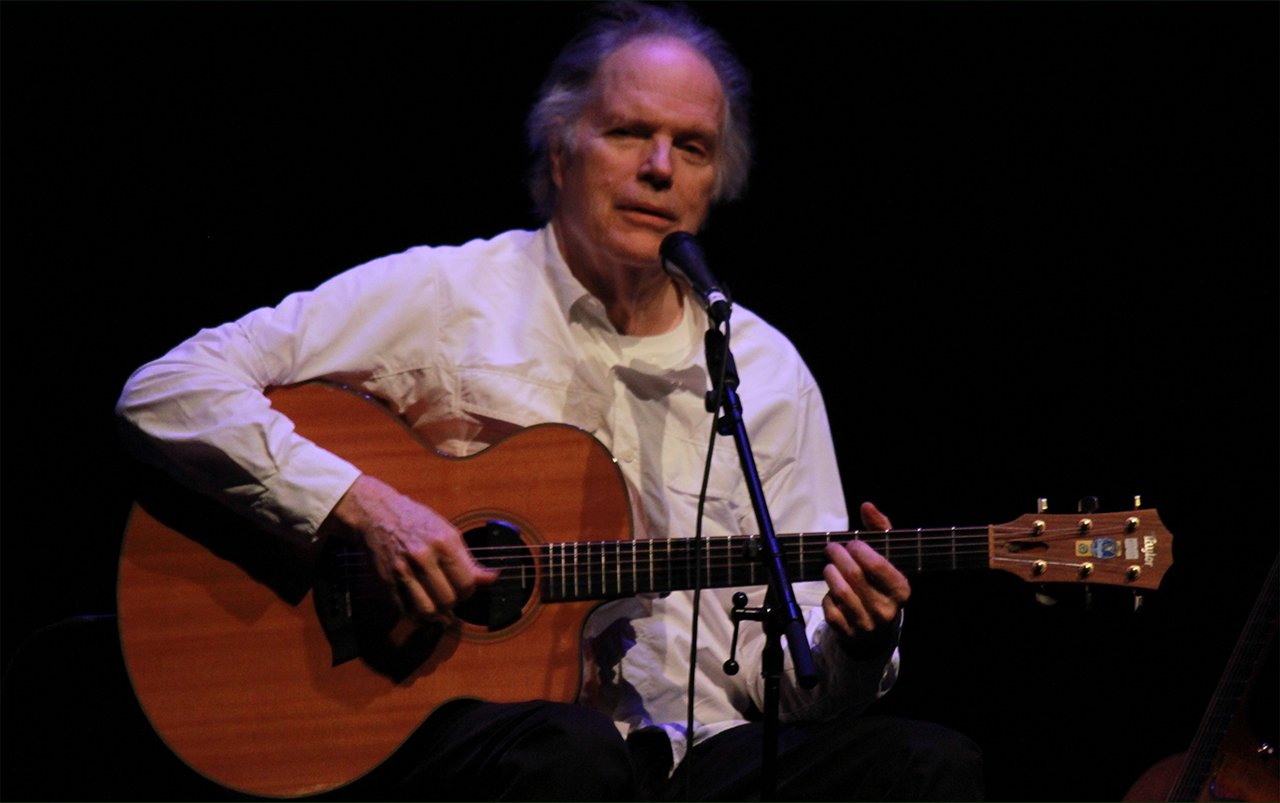 It was not 'shut the folk up' music, because, simply, Leo Kottke is not a Folk musician, never has been. He is a musician, and a damn fine one; one of the most unique masters of the guitar to ever play upon planks of American stages.

Granted, Leo Kottke is a one-man-band, and blessed with the pure talent and vigor to create a wall of acoustical sound, not layered in tracks of smaller sounds, but one big sound, with plenty of rhythm to march the melody along. His playing style is a happy pop of chords played over the scale of single notes, which is also employed limited pieces within his vigorous style to punctuate as to fully express his trademark presentation. To effect that 'happy pop of sound', Mr. Kottke hammers the low range of bass chords, and then forcibly slides his fingers down the fret-board to play the same chorded note in a higher register, or to play another chorded note, barred and even more profound. It is certainly a very full sound, open tuned on nearly every melody, pitched to Kottke perfection, and unyielding in its abject force. Watch the videos above, and you might see /hear a thread of what I mean.

This night was not that night; however, I was energized to see that one of my musical favorites did the best he could in what time he was allotted. In life, that is our highest calling ... for all of us. In that maxim, this metaphor, Leo Kottke did not disappoint. 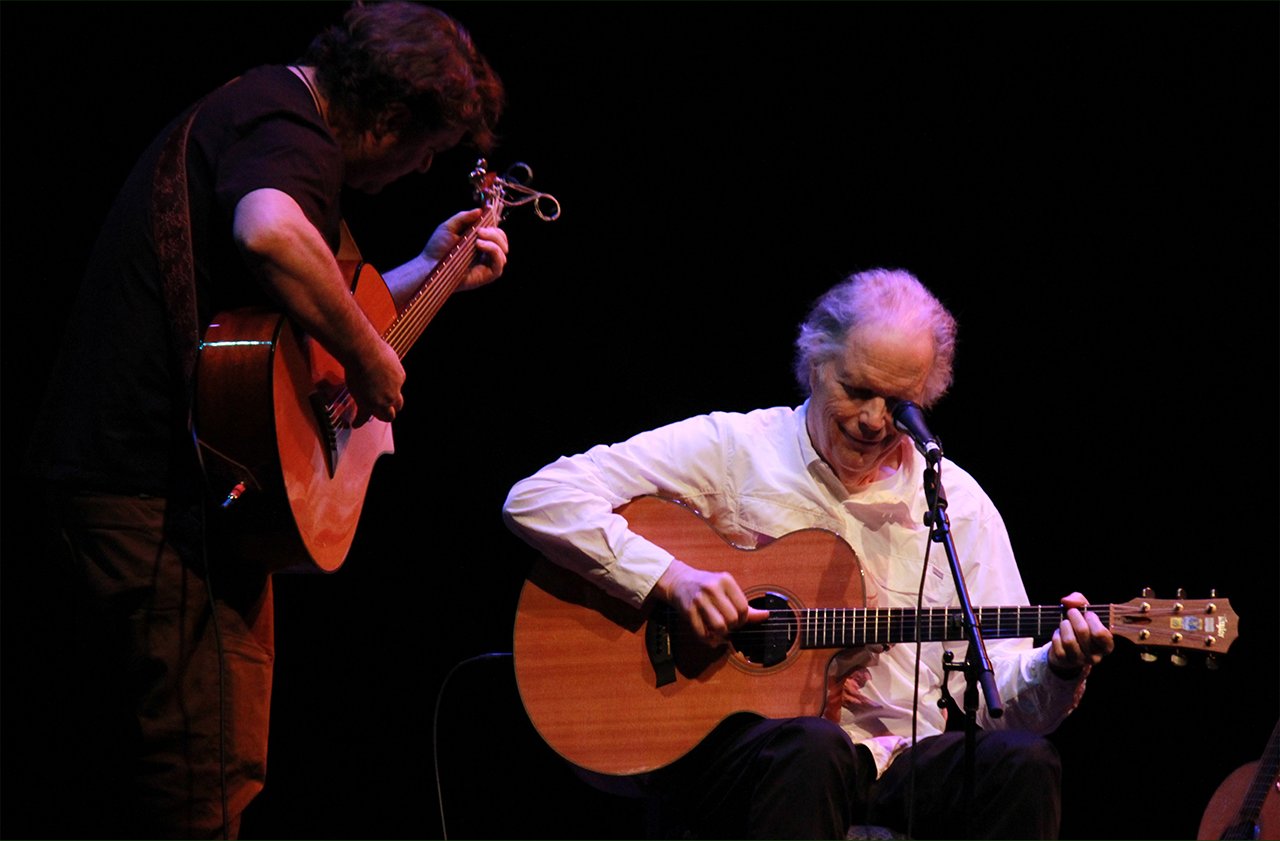