Of course he did. Hall was until recently the minority leader in the North Carolina House. He is a Marine and a lawmaker widely respected on both sides of the aisle. His answers to the senators' questions were direct and complete. He is undoubtedly qualified for the job.

So why have the voters of North Carolina had to witness several weeks of controversy about the Hall nomination? Because Cooper and other Democrats are furious at Republican lawmakers for the special session in December at which the GOP majority checked the power of the incoming governor in several ways, including a bill setting up a confirmation process for Cooper's Cabinet secretaries.

Rather than comply with the new process, Cooper's team filed a lawsuit challenging its constitutionality and encouraged his Cabinet nominees not to participate in it. In fact, the governor has absurdly claimed that his Cabinet nominees are not really nominees, even though they are already running their respective departments, because he has not yet submitted their nominations to the General Assembly.

I can understand why Cooper resents the confirmation process. No previous governor has been subjected to it (although lawmakers have considered the option in the past). But in my opinion, this was not the right battle to pick. 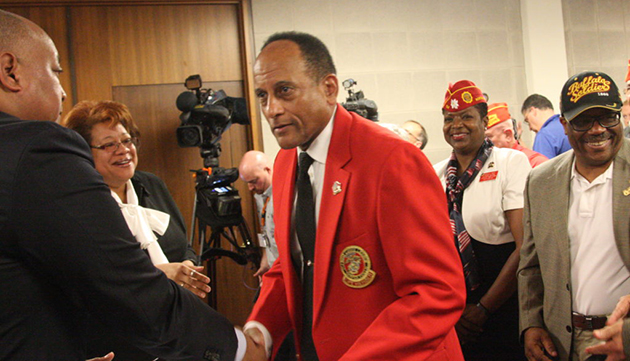 It was no surprise that former House Minority Leader Larry Hall of Durham, a Marine, was confirmed unanimously to be Secretary of Veterans and Military Affairs. This made Gov. Roy Cooper's decision to bar him from three confirmation hearings puzzling. (CJ photo by Dan Way)


For one thing, the timing was horrible. Even as the Cooper administration was playing its evasion game and state lawmakers were having to subpoena Hall to show up at his confirmation hearing, Democrats in Washington were grilling Donald Trump's Cabinet nominees and, in some cases, uncovering relevant information about their backgrounds and fitness for office.

The resulting message from North Carolina Democrats was obviously incoherent. Confirmation is a necessary process for staffing federal departments but an intrusion on executive power when staffing state departments? This made no sense to voters already used to the idea from national politics. Indeed, in a new High Point University poll, only 29 percent of North Carolinians said they agreed with Cooper's position.

But does the governor have a valid legal argument against it? There's not much relevant case law here, but past practice and a plain reading of the state constitution say no. In Article 3, Section 5, it states that the governor "shall nominate and by and with the advice and consent of a majority of the Senators appoint all officers whose appointments are not otherwise provided for." Cooper's lawyers say this provision only applies to other elected officers in the executive branch, such as state treasurer or agriculture commissioner. But the gubernatorial appointment of those officers, in such circumstances as resignation or death in office, is already provided for in the constitution, so the provision would be entirely meaningless if interpreted that way. Moreover, the section that deals with those Council of State members is titled "other elective officers." The modifier was needed because the framers of the constitution clearly knew not all officers of state government were elected.

While North Carolina Cabinet secretaries have never been subjected to confirmation, other gubernatorial appointees such as banking commissioner, state controller, and industrial commissioner have gone through such a process for many years. It's hardly unfamiliar or unjustifiable.

Other bills enacted during the December special session, such as the one combining the state ethics and elections boards, raise some debatable issues. But if Cooper wins his legal challenge against Cabinet confirmation, it will likely be only because Democratic judges choose to act in partisan solidarity - which would itself constitute a political loss for the governor and his party, who have denied that partisanship is a reliable signal of how judges approach the cases and issues before them.

I know it is tempting for politicians to accept every battle and defend every hill against their adversaries. But it isn't good strategic advice - which is something Cooper isn't getting enough of.
Go Back