Published: Saturday, March 25th, 2017 @ 3:27 pm
By: John Locke Foundation   ( More Entries )
Publisher's note: The author of this post is Dan Way, who is an associate editor for the Carolina Journal, John Hood Publisher.

It was a poignant moment in a heartfelt push for stronger laws to prevent opioid addiction. Marsha Gintis pleaded with Senate Health Care Committee members while holding aloft a portrait of her son, Drew, who died at age 21 from an opioid overdose.

"Drew's death could have been prevented. It's crucial that our state enact sensible prescribing laws to mitigate the number of individuals who become addicted," said Gintis, of Cary. She described how her "fear turned into grief" when she learned her son suffered a fatal Fentanyl overdose July 31, 2015.

Gintis, whose son became addicted to opioids prescribed to him for an athletic injury, was among several parent survivors on March 15 retelling their painful struggles with children who became hooked on powerful opioid painkillers prescribed by their doctors.

The General Assembly is looking at several ways to address the addiction issue, focusing for now on tracking opioid prescriptions more effectively. But even some who agree the legislature needs to take action are urging caution. They want to make sure that new laws or regulations do not unintentionally harm chronically or terminally ill patients who endure crippling pain or the physicians who are trying to relieve their suffering. 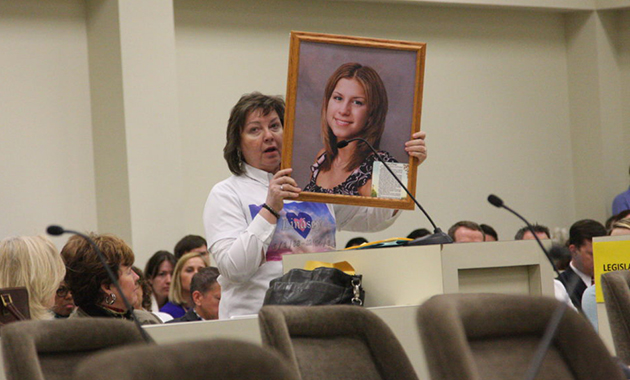 Cathy Pietro shows a photo of her daughter Lindsey Pazder to a March 15 meeting of the Senate Health Care Committee. Pazder died of an opioid overdose. (CJ photo by Dan Way)


"Every day four North Carolinians die from medication or drug abuse. Thirty-six are hospitalized, and 64 are taken to emergency rooms. One out of every 100 babies born in our state are born addicted to opioids," Davis said, and more than 70 percent of heroin abusers got started on opioids.

"Statewide [opioid] overdose deaths has grown by nearly 400 percent in seven years. It is now the No. 1 accidental death cause, surpassing even vehicle deaths," Davis said. "I and others have decided we can no longer sit on the sidelines."

"The STOP Act is an important first step for our state to take in combating this crisis," Attorney General Josh Stein told committee members.

The bill aims to reduce addiction through improving methods for prescribing medications so that people don't get addicted in the first place, Stein said. It also appropriates $20 million over two years to help people struggling with addiction.

Davis said the goal is to use the money for community-based treatment and recovery services.

Wednesday's committee meeting was information-only, with no vote. Davis said a companion measure, House Bill 243, likely would be the legislative vehicle the Senate eventually takes up.

S.B. 175 would impose an annual $20 fee on those licensed to prescribe Schedule II, highly potent controlled substances with a high potential for abuse and dependence, to less-potent Schedule V drugs with a lower risk of some dependence.

That fee and state appropriations would go to a fund administered by the state Department of Health and Human Services to operate a controlled substances reporting system.

Davis said about 22 percent of the state's prescribers use the reporting system now, but most shun it because it is not user-friendly, and the state must improve it.

The reporting system would track things such as total number of prescriptions dispensed and for what medications, user demographics, the number of pills per prescription, number of users who received a prescription in more than one county, and categories of practitioners prescribing the medications.

Sen. Tommy Tucker, R-Union, said in the last budget cycle a measure was inserted requiring doctors to report opioid prescriptions as a condition of keeping their medical licenses. The North Carolina Medical Society objected, and it was pulled from the budget.

Tucker and others said they don't want to be perceived as beating up on doctors for the opioid epidemic.

Tucker said doctors are hamstrung by medical protocols for pain management. If a person comes to their office with severe back pain their most available option is to write a script.

"Insurance companies don't pay for chiropractors, massages, physical therapists, etc., to deal with that issue, with an ongoing back issue. The only option physicians have is to prescribe something for pain," Tucker said. The same is true for Medicaid recipients, he said.

Some reservations about the bill were raised.

"We are just absolutely committed to reducing the opioid problem in our state," said Chip Baggett, senior vice president of the Medical Society.

But there is concern about regulating physicians' prescription powers, and limiting their professional judgment, so S.B. 175 should be "put together in such a way that it works in real life as well as it does on paper," Baggett said.

"I want to make sure we maintain some carve-outs for the hospice and terminally ill folks," said Sen. Rick Horner, R-Wilson. He was concerned limits on the number of pills prescribed and for how long they may be prescribed could deny those patients critical end-of-life medication to ease their suffering.

"We're not worried about the hospice patients becoming addicted. We just want them to be comfortable," Davis said. But he said there are legal concerns over who controls the opioids when a patient dies - the health care provider or surviving family members.

But most of the meeting's focus was on how to keep an abundance of overprescribed opioids from circulating in the state.

"It's affected my community, my constituents, and my family whereby we lost a beautiful stepson at 22 years old," said Sen. Tom McInnis, R-Richmond.

His stepson had an auto accident, and was prescribed opioids for pain due to broken bones.

"That was the trigger that caused him to start the downward spiral, and he ... lost his life as a direct result," McInnis said, calling opioids "poison addictive pills."

Cathy Pietro of Farmville told how her 25-year-old daughter Lindsey Pazder, despite going through recovery, eventually succumbed to an opioid overdose after getting hooked on pills prescribed for migraine headaches.

"My prayer for this pandemic that we're having all over our country, and here in North Carolina, is education, and awareness," Pietro said. "For now it's either incarceration or death, and if you look at the newspapers or the jails, it isn't working."
Go Back