Missy Raines Finds Bath, NC Receptive | Beaufort County Now | I'm sure this is not a first, maybe it is: But when has Bath, NC ever had a musician at the precipice of talent as Missy Raines with her New Hip in tow?

Login to Send a Private Message to Stan Deatherage
Missy Raines makes a detour from the World stage to play Rob Cuthrell's barn, off of Creek Road just north of the Village of Bath, to highlight the opening of the Tar Landing Jamboree.

I'm sure this is not a first, maybe it is: But when has Bath, NC ever provided the community stage to a musician at the precipice of talent as Missy Raines, with her new New Hip in tow?

Well, it did happen. Missy Raines brought her new version of her New Hip, her varied collection of musicians that tour with her as she plays concert stages far and wide, interpreting a wide variety of musical genres, while mixing in a number of the singer's original compositions for good measure. It was an original exposition of Americana, built one well crafted tune after another. 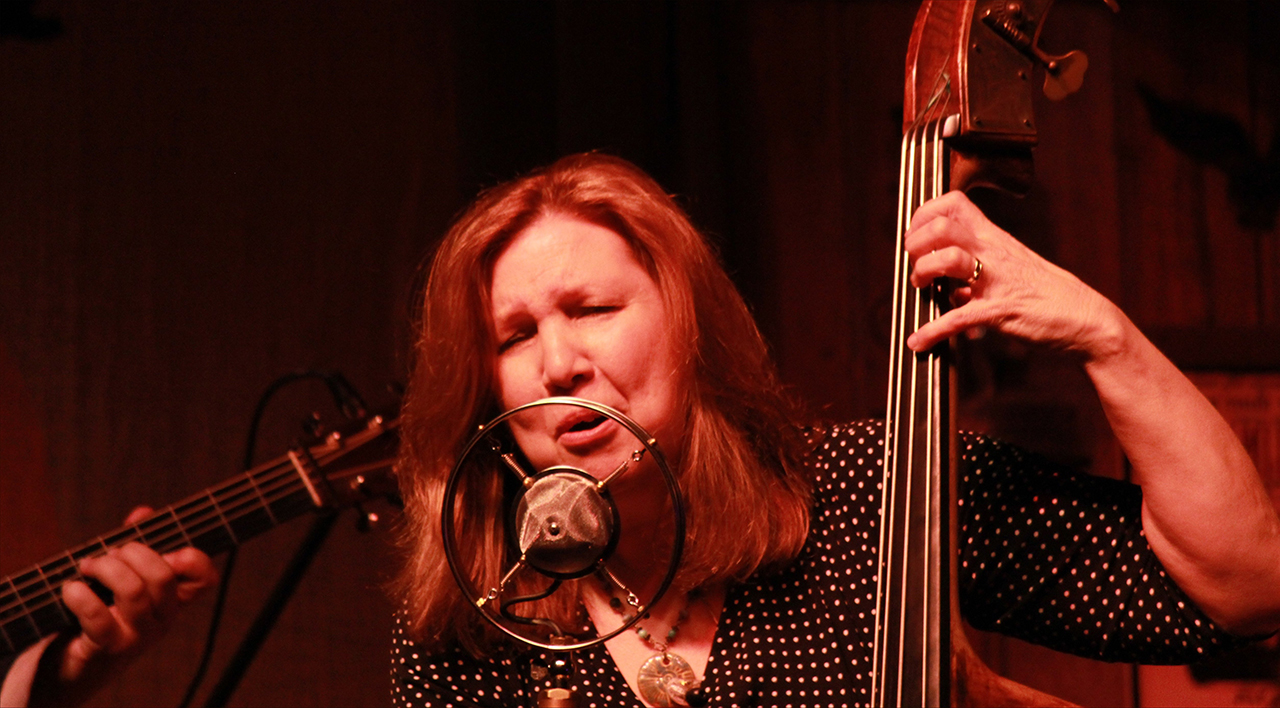 Missy Raines finds that blues note to complement the winding note of her big bass fiddle: Above.     photo by Stan Deatherage     Click image to expand.

Years before, on October 23, 2009, Missy Raines played the Turnage Theater, where creative comrade Wyatt Sanderman Day and I attended the show - Wyatt scribing the event, and me shooting the images with the best camera I possessed, which was at least two cameras ago ... and, I'm probably still due an updated model as soon as I can afford it. Here, 7 1/2 years later, I jumped at the opportunity to be in her audience, knowing full well I would enjoy the evening, especially in such an informal setting such as Rob Cuthrell's barn; where one could relax, dance with their peppy granddaughter hearing Missy for her first time; while making plenty of images for our readers here on BCN. 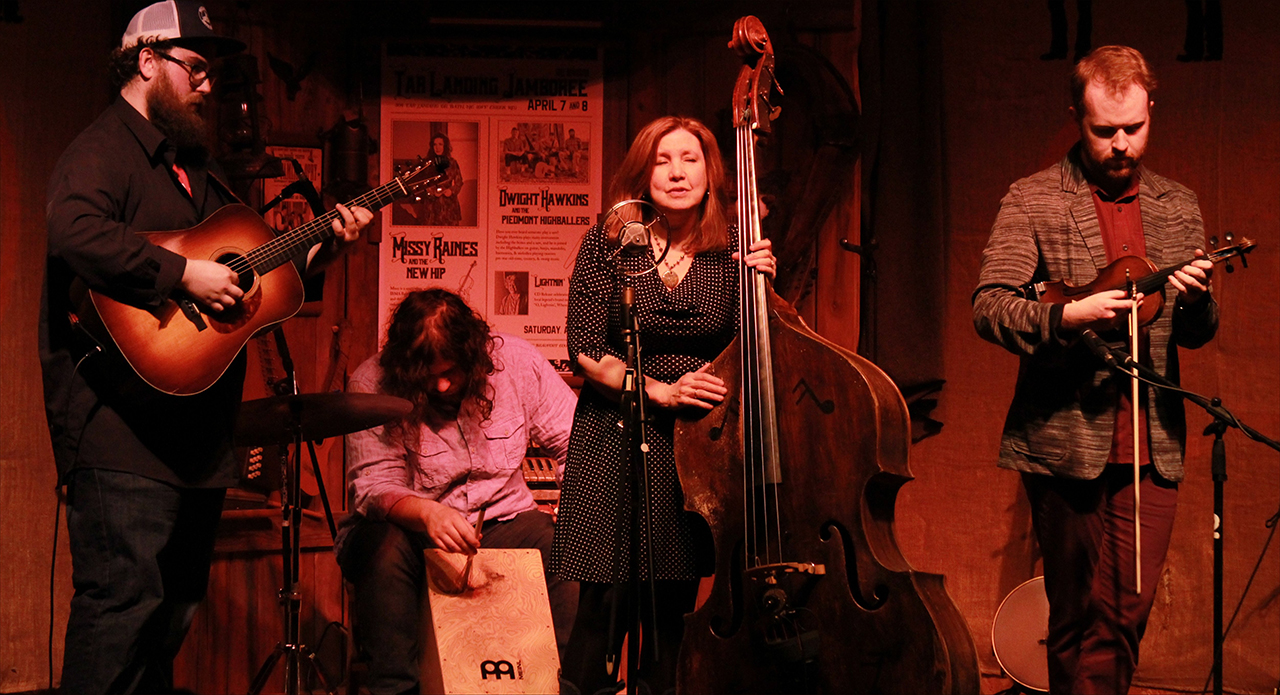 Missy Raines takes the stage with her New Hip (the band), and finds a most receptive audience: Above and below.     photos by Stan Deatherage     Click images to expand. 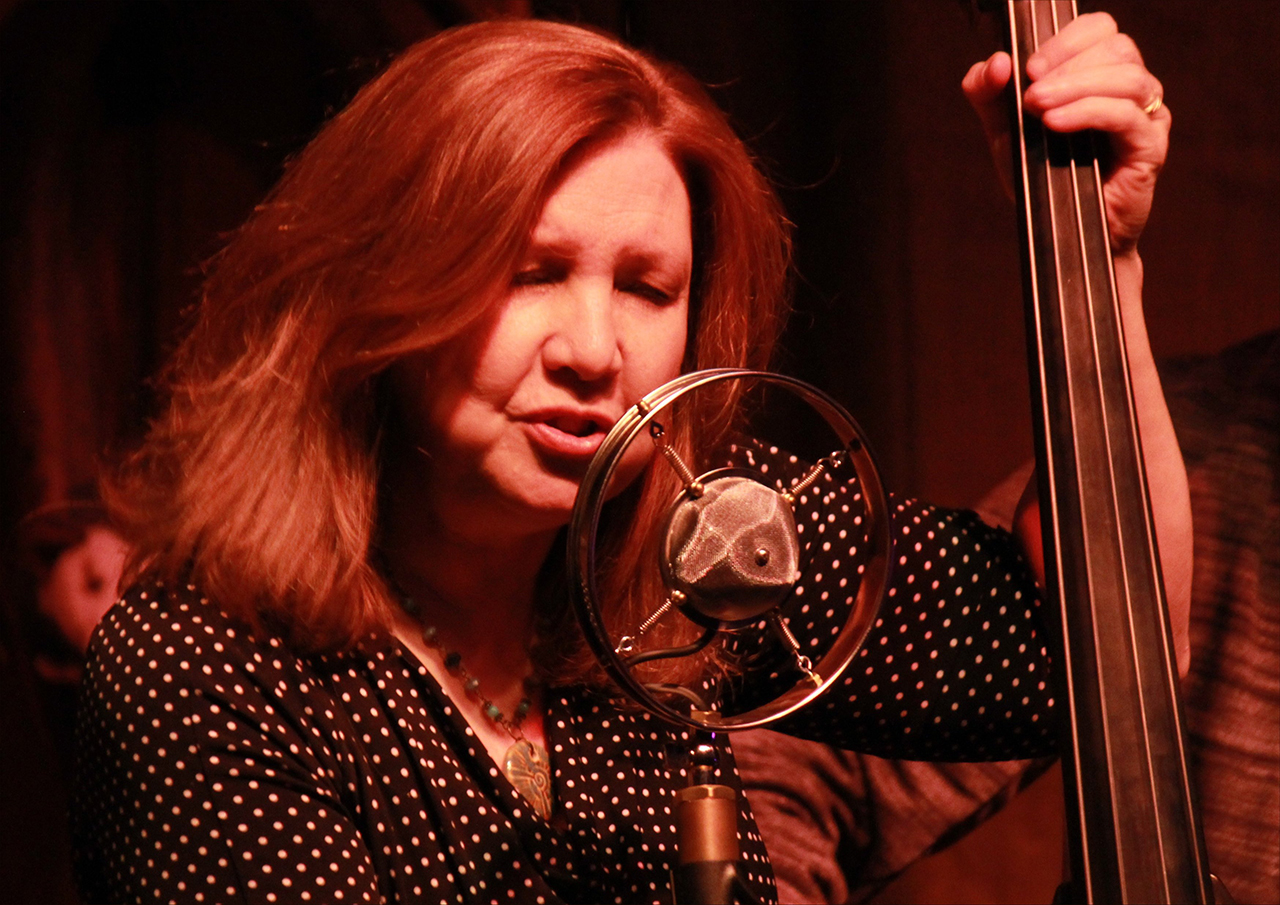 The images that dominate this post were made of musicians that know their craft, and they well know their place within the blending of its message. Each member of the New Hip knows their part, and in Missy Rains ensemble, there are no small parts. Not in Missy Raines band, where she blends the fully American musical genres of Blues, Jazz and Bluegrass and Traditional Country into the musical landscape that is Missy Raines and the New Hip.

New Hip's newest recruit, Bryan McDowell, took the lead instrument duties of many melodies performed, playing vintage lead Bluegrass instruments, Fiddle and Mandolin, which are two of my favorites if played competently, and Mr. McDowell did not disappoint in that regard. McDowell moved effortlessly between both instruments adding a treble texture atop the smooth bass notes that served as an ever present and perfectly honed baseline to every tune, irrespective of the blended genres. 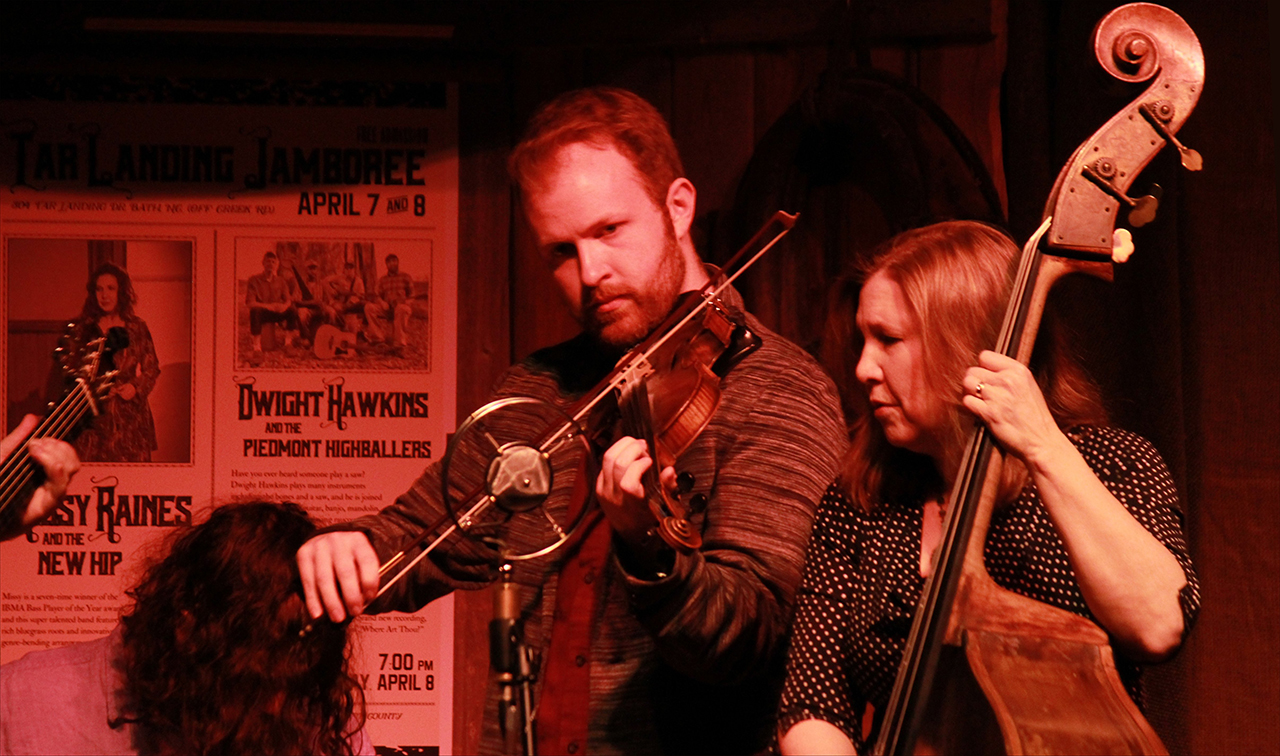 Bryan McDowell takes center stage to provide Missy Raines the lead that settled the question as to whether the New Hip would continue to nibble heartily at these Americana genres to celebrate its Traditional Country and Bluegrass roots: Above and below.     photos by Stan Deatherage     Click images to expand. 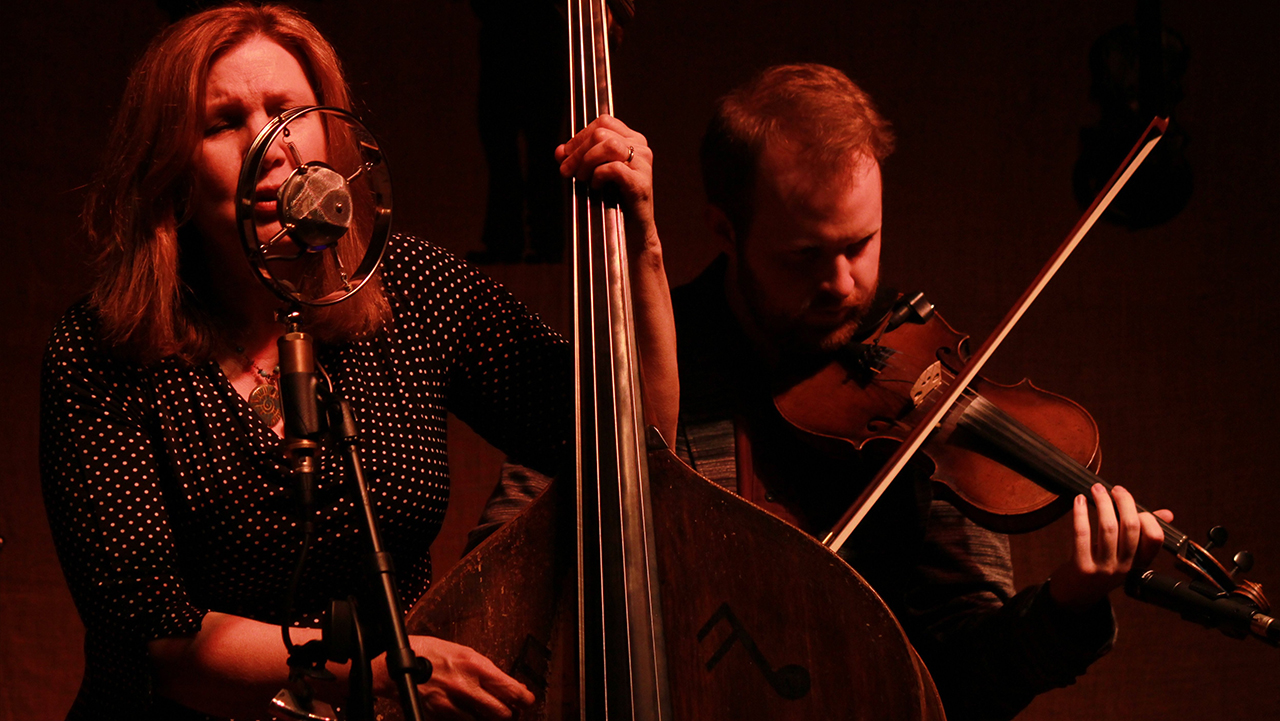 And then there is the consummate musician Missy Raines, former IBMA Bass Player of the Year, with a voice that takes all the strength it can muster to bend notes perfectly to mimic the instrumentation of a smooth flowing melody. Missy may be Appalachia's own spawn, hailing from northeastern West Virginia, north of Canaan Valley - beautiful country - yet her voice reminds one far more of Billie Holiday than Loretta Lynn. As much as Missy Raines pays existential homage to her Appalachian roots, she has a pure soul for the Bluesy Jazz that is a permanent extension of her musical expression, and few traditional songs roll by before we are afforded another resonating soulful tune that brings the music aficionado deeper into her web of what is so very auditorily real. 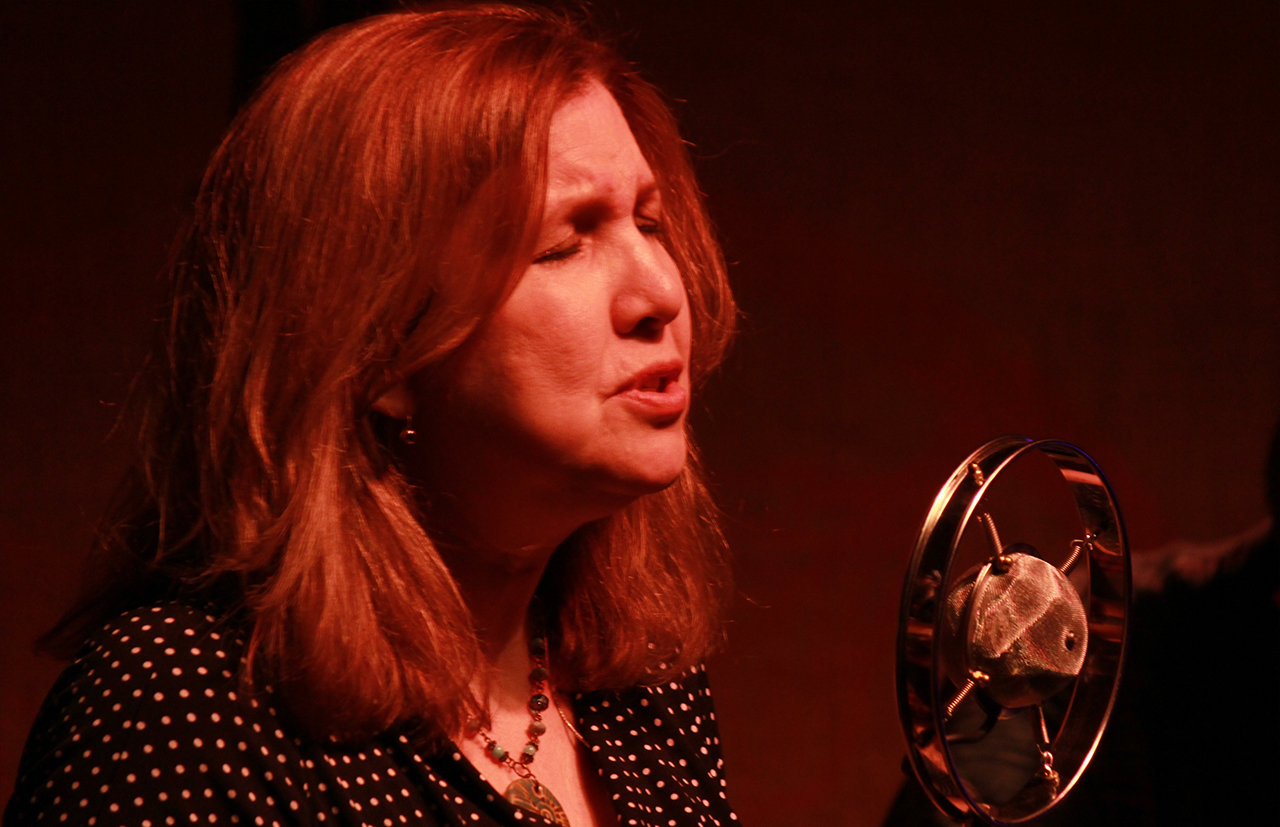 : Songstress Missy Raines digs deep to find that inner voice to better speak the essence of a soulful melodic message: Above and below.     photos by Stan Deatherage 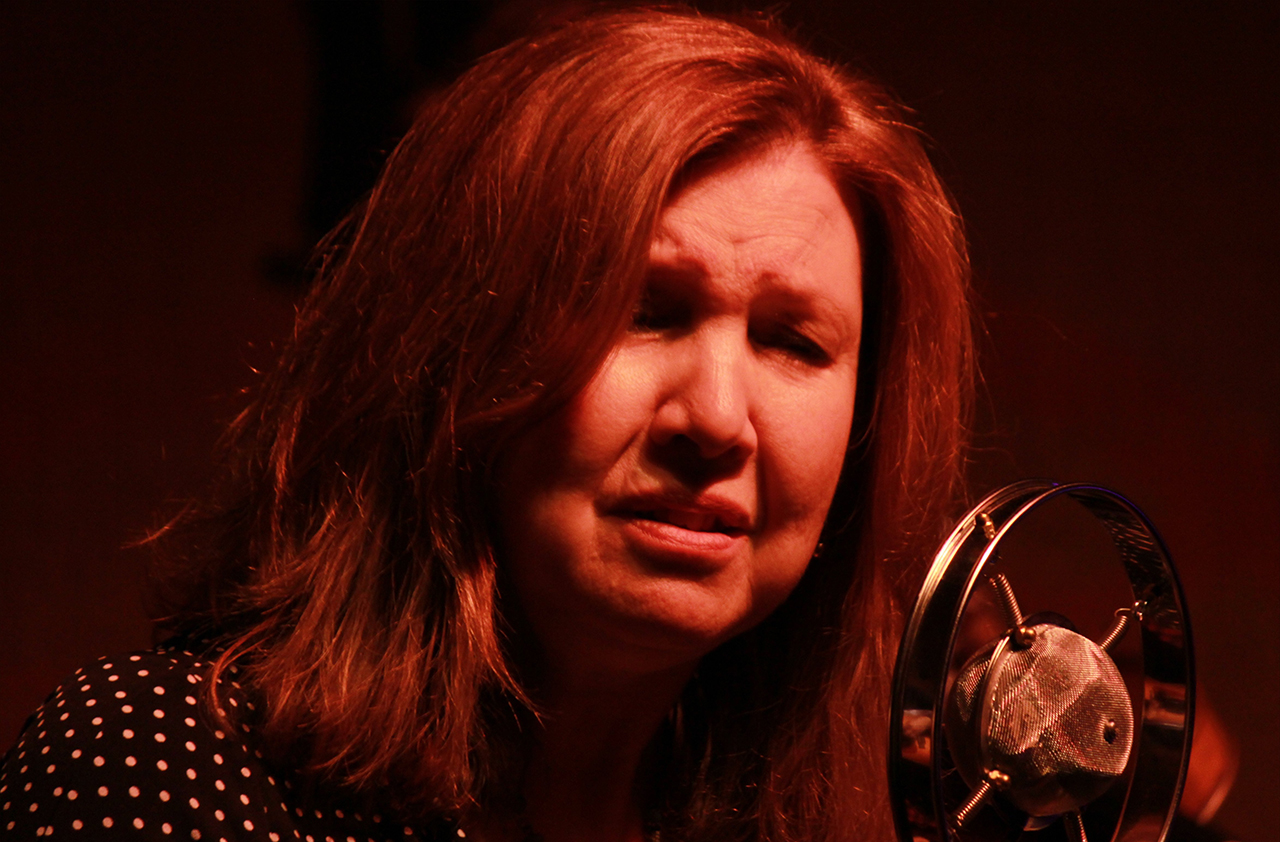 Missy Raines and the New Hip may have made Bath musical history by performing very near North Carolina's oldest permanent settlement, but, it would not have been possible without the Beaufort County Traditional Music Association's (BCTMA's) efforts to bring this fine talent to central Beaufort County. A big thank-you there, and, consequently, I had a most enjoyable time that night with Missy, her New Hip all within the congenial environs of Rob Cuthrell's barn. 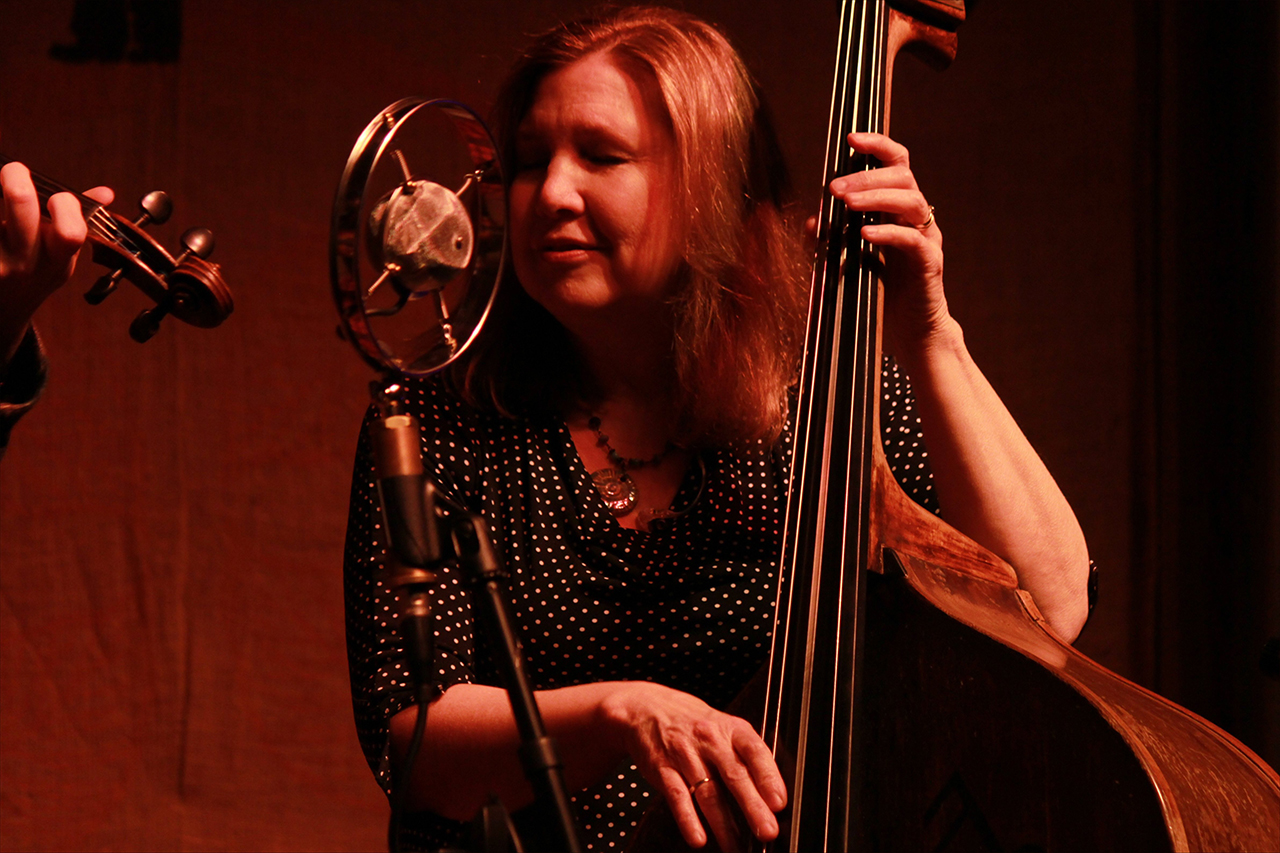 : With Missy Raines, there are two character ingredients that are always present - a commitment to the craft, and a sweet blithesome spirit. That evening, I enjoyed both: Above and below.     photos by Stan Deatherage 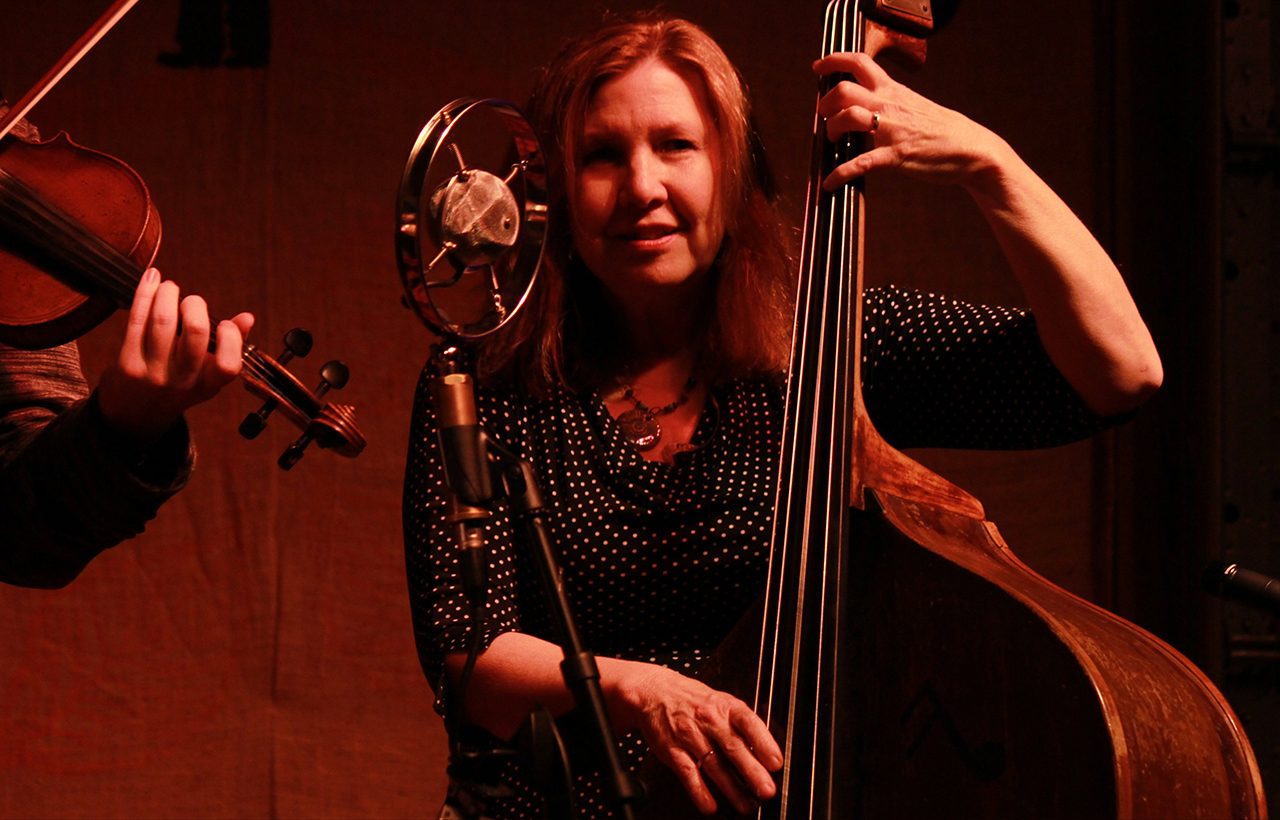