Published: Sunday, June 25th, 2017 @ 9:59 pm
By: John Locke Foundation   ( More Entries )
Publisher's note: The author of this post is Dan Way, who is an associate editor for the Carolina Journal, John Hood Publisher.

Flanked by large posters - one with quotes by Cooper citing his priorities, and another with green checkmarks showing they were included in budget - Berger and Moore noted at a Thursday news conference that nearly 70 percent of the legislators, a veto-proof margin, passed a budget in line with the major items Cooper desired.

"Yet to hear the governor talk, you'd think we were on the brink of the apocalypse," Berger said.

He noted the legislature's budget mirrors the governor's, and spends 2 percent less, although Cooper called it "the most fiscally irresponsible budget he's ever seen."

Cooper "should spare us the melodrama, and save the theatrics for his political commercials," Berger said. He accused the governor of "playing to the extreme left-wing" of the Democratic Party.

"Governor, if the things you've said and campaigned on are more than just empty promises, you will sign this budget," and honor the pledges he made to North Carolinians, Berger said.

If he does not sign the "common-sense, bipartisan budget," Berger warned, "we will quickly override your veto."

The Senate gave final approval Wednesday to the budget conference report by a 39-11 margin. The House on Thursday backed the budget by a 77-38 vote.

"The more we learn about this budget, the worse it is. Instead of crafting a budget that works for the whole state, legislators voted to add hidden policy changes, and diverted millions of dollars in spending for pet projects in their own districts at the last moment with no time for review," Porter said in the statement.

"Our staff is reviewing those to ensure a complete response. The governor made clear that he thinks this budget lacks vision, and unfairly picks winners and losers, and he will announce his plans in coming days," Porter said.

Moore also cautioned Cooper not to veto the budget. He cited many of the same provisions as Berger that satisfy Cooper's budget demands:


Moore noted that in 2011, when the GOP took majority control of the General Assembly, the state was $2 billion in debt, and now has $1.8 billion in reserve savings, a nearly $4 billion swing.

He said with hard work, and by setting priorities, the state's fiscal fortunes have rebounded. 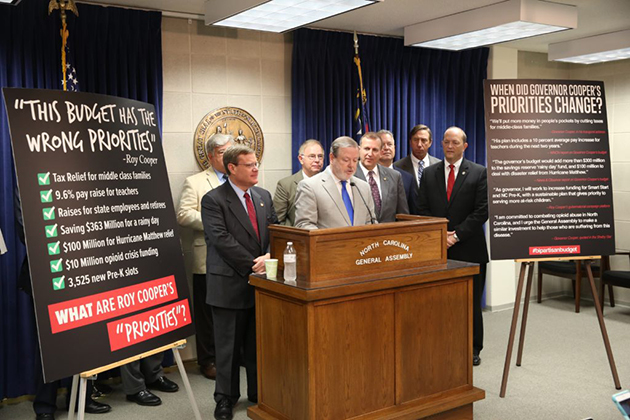 
Tax cuts and wise economic development programming have put North Carolina in a position where it is now negotiating with a major company that could bring 8,600 jobs to the state, Moore said.

He did not name the industry or the company, though he did mention the jobs boom created when BMW built a vehicle manufacturing plant in Spartanburg, S.C. When asked for a timeline on a potential deal, he said it would be this year.

"Some on the far left talk about cutting taxes for millionaires" in the budget, Moore said.

"How can somebody argue that's a tax cut for the rich?" Moore said.

During a question-and-answer session, the lawmakers were asked about budget cuts to the Attorney General's Office that Attorney General Josh Stein said were draconian, and would make the state less safe.

The attorney general's client is the state of North Carolina, and in many respects that means its elected representatives, he said. "There have been instances where the attorney general seems to believe that is not his job," Berger said.

The agency's budget was reviewed closely, and the funding level "is more than adequate" for Stein to do his job, Berger said.

The budget also directs Cooper not to hire outside counsel without express approval and funding from the General Assembly.

Moore chided Cooper for challenging so many legislative policy decisions in court.

"He is seeking to upend not decades but centuries of jurisprudence in this state" to change the balance of power, Moore said. "Our state and our state's founders intended that you have a legislature with most of the [policy-making] authority."

Berger said the difference with the legislature using tax dollars to hire outside attorneys is that lawmakers are defending state actions, not trying to overturn state laws.
Go Back