Of Mice and Men | Beaufort County Now | This remake of the 1939 film by Director /Actor Gary Sinise, of John Steinbeck's classic novel, communicates well the lengths men will go to survive, and yet retain some semblance of dignity.

Of Mice and Men

This remake of the 1939 film, by Director /Actor Gary Sinise, of John Steinbeck's classic novel, communicates well the lengths men 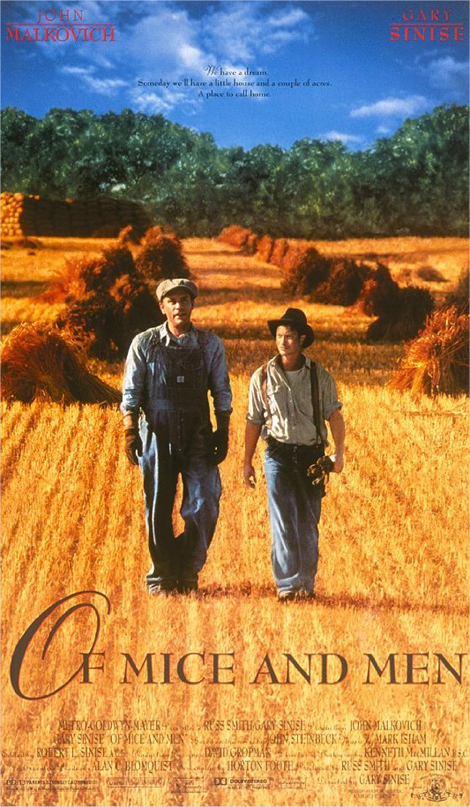 will endure to survive, and yet retain some semblance of dignity. In the Great Depression era of one of California's most fertile valleys, there was much work, much sorrow, and precious little dignity. At least that is the way John Steinbeck chronicled it.

Director Sinise and Screenwriter Horton Foote (he also adapted Harper Lee's only novel, "To Kill A Mockingbird," to the big screen) remained true to Steinbeck's strong sense of a cynical, cruel society, where only pockets of kindness and compassion existed amid the grim reality of those desperate days in a relatively young California. The Sinise / Foote version used the pastoral backdrop of Steinbeck's boyhood stomping grounds, Salinas Valley, to play out upon this sumptuous stage of bounty, a cold, harsh reality, where not everyone participated in the "American Dream."

John Steinbeck saw this world, in those times, and espoused it with a great passion, in an articulate light, whereby others came to realize the inequity in some places, among some Men. This was Steinbeck's strength: to summarize the plight of a group, by showcasing the sorry lot of a few through the use of symbols, and utilizing the strengths and weaknesses of the lead characters.

The Sinise / Foote version was structurally true to that premise; however, with a run time of just 115 minutes, some subtleties, within the Steinbeck's novel, were sacrificed to achieve a tale on celluloid that expressed well the author's intent, while keeping it within the scope of the imperfect medium of film. Here within this context, the Sinise / Foote version well utilized the imagery of all the integrated components of the working ranch to form the stage, from whence the lead characters may give presence to act as symbols to tell Steinbeck's tale. 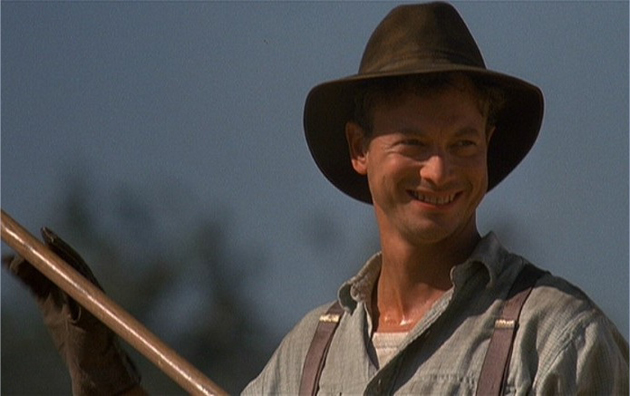 Steinbeck's George Milton, played by Gary Sinise, was the quintessential cynic, who also had the strength of character to know loyalty and the resulting encumbrance of duty: Above. And here having an understanding with the ranch foreman, Slim, about himself and his ward - Lennie Small: Below. 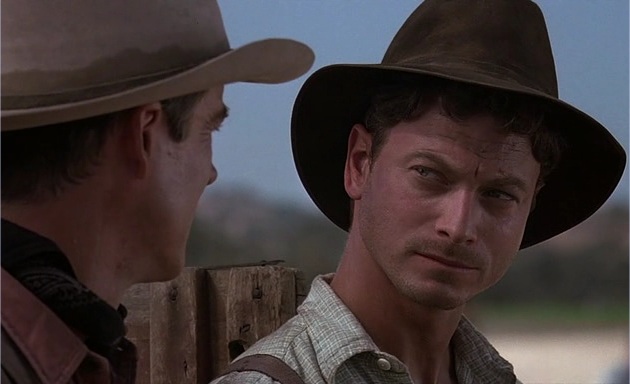 To symbolize the imperfection of man, Steinbeck used the profoundly mentally handicapped character of Lennie Small, played by the great character actor John Malkovich in the Gary Sinise remake. The apparent irony of being given the sir-name of Small is great irony, since Lennie's physical strength, a benefit of his great stature, was large although his mental capabilities were quite small. John Malkovich played the kind-hearted, severely intellectually challenged Lennie, as if he knew him deeply, to the extent that he may have one time been him, but, miraculously, was cured of the condition of an idled mind.

To symbolize the cynicism of a cold world, but with the dual hope that compassion can cure all sins, Steinbeck used the person of George Milton (one must wonder was Steinbeck allegorically referring to the legendary 17th century philosopher / writer John Milton) as his shield against cruelty and ignorance. George, underplayed wisely and well by Gary Sinise, was the fulcrum and the pivot on which this story was structured and then turned. George also well symbolizes the collective spiritual whole of the United States of America itself, which is similarly reluctant to act; however, almost always does the right thing. 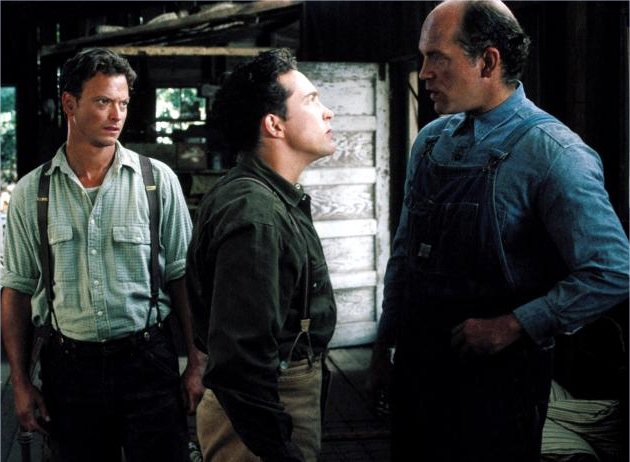 Curley (center), played by Casey Siemaszko, was a small man, with a small heart, who hated anyone larger than himself. George (left), Sinse, looks on as Curley confronts Lennie (right), Malkovich, for simply being larger than himself: Above. The kind, physically crippled Candy, played by venerable Actor Ray Walston, stares into the abyss of his pitiable life: Below. 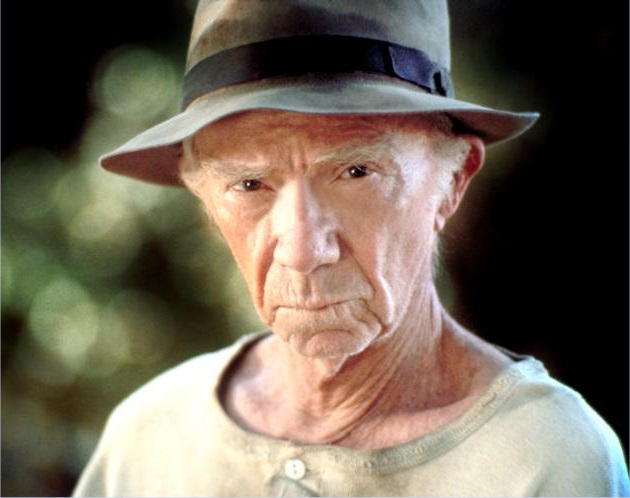 To symbolize the reality of the crushing weight of societal transgressions, the kind, goodly, crippled Candy, Ray Walston, is utilized. Candy is the perfect underdog: elderly beyond his years, a sweetness of spirit distilled by a cruel world, thus the audience yearns for a better day for the crumpled old man. In this tragedy, one wonders: Will it ever come, or will this humbled old man die unfulfilled? 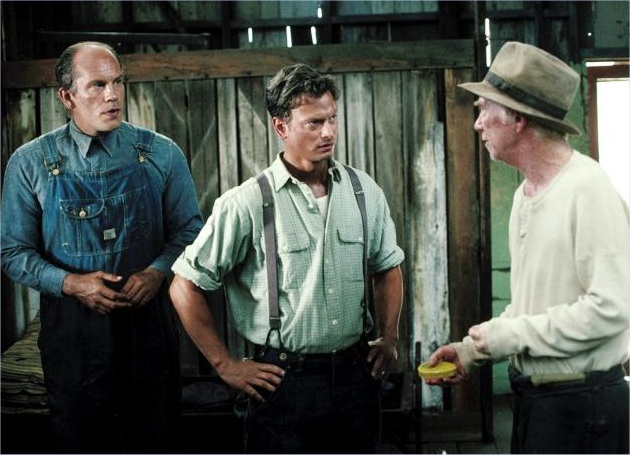 For one rare moment, Candy may get his wish of a fulfilled life; however short. Here George rationalizes an economic alliance with Candy, who has 350.00 saved, to possibly buy a 600.00 ten acre farm, with a cabin on it, off in the hills surrounding the Salinas Valley - Lennie (left), George (center), Candy (right): Above.

To symbolize the oppression of cruelty, devoid of all compassion, Steinbeck employs the rancher's son, Curley. He has the power of privilege, but is small, mean and ultimately the symbolic murderer of spirit. He is devoid of love and his one passion is fighting back against a world that is bigger than himself. One could pity the foolish man if he were not so dangerous in these desperate times.

His wife, played by Sherilyn Fenn, is ultimately a victim of his cruelty that thrives on damaging the spirit of others. She is driven by his singleness of purpose, to seek companionship, irrespective of station, and uses the "cool barn" as her base of operation. It will prove to be her final undoing. 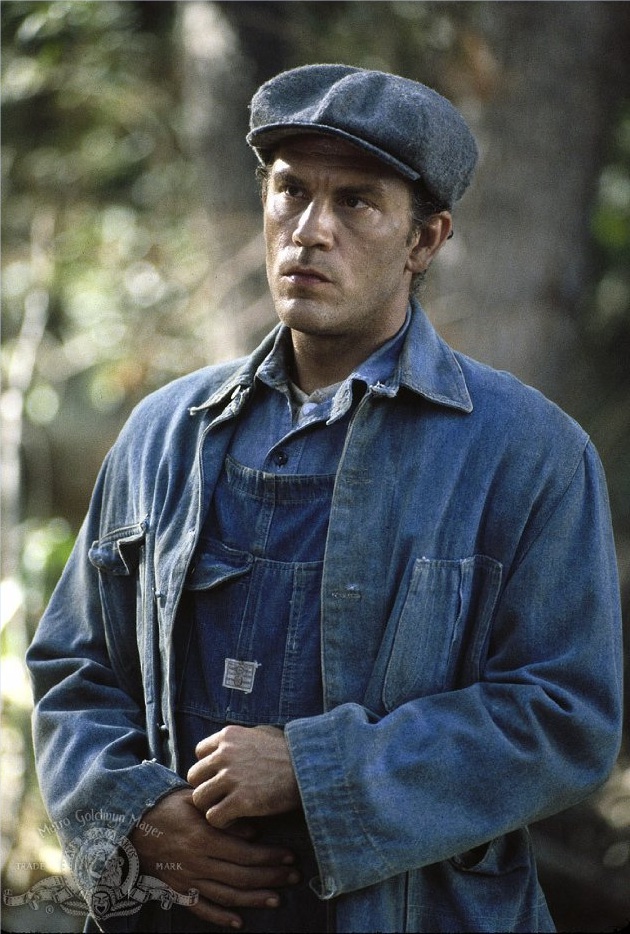 Lennie Small, John Malkovich, is the ultimate tragic figure in all of American literature: Above.

In all of John Steinbeck's literary work regarding the Great Depression: "Cannery Row," "Grapes of Wrath," "To a God Unknown," there was always a number of tragic figures in each story, but often there was one that was central to the story's conclusive theme. In this tale it was Lennie, who would work as hard as two men, but had the mind of a small child. All he wanted was a safe place on that 10 acre farm, where he could tend his rabbits, and escape a cruel world in those terrible times:

"George: Guys like us that work on ranches are the loneliest guys in the world. They ain't got no family and they don't belong no place. They got nothin' to look ahead to..."
Lennie: "But not us George. Tell about us."
George: "...well, we ain't like that. We got a future. We got somebody to talk to that gives a damn about us. If them other guys gets in jail they can rot for all anybody cares."
Lennie: "But not us, George, because I... see, I got you to look after me, but you got me to look after you."
George: "We're gonna get a little place."
Lennie: "Okay, yeah, we're gonna get a little place and w're gonna..."
"George: We gonna..."
"Lennie: ...have..."
George: [Lennie mouths what he says] "We're gonna have a cow, and some pigs, and we're gonna have, maybe-maybe, a chicken. Down in the flat, we'll have a little field of..."
Lennie: "Field of alfalfa for the rabbits."
George: "...for the rabbits."
Lennie: "And I get to tend the rabbits." 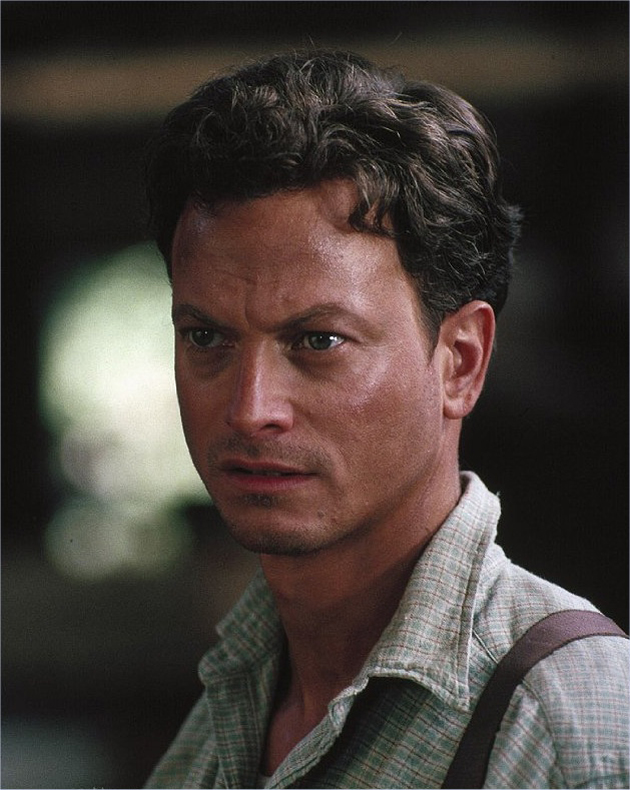 George Milton, Gary Sinise, is the rest of us, if we are honest, strong, loyal, dutiful, and compassionate, while cynical, people. Then again, maybe he is just some of us, and may we all pray that one day those numbers will cease to dwindle: Above.