NCAE: A Giant Chasm Between Rhetoric and Reality

Published: Wednesday, January 11th, 2012 @ 7:48 am
By: Civitas Insitute   ( More Entries )
Publisher's note: This article, by Bob Luebke, was originally published in Civitas in their Education section.

Last week the North Carolina General Assembly successfully overrode Gov. Perdue's veto of SB 727- No Dues Checkoff for School Employees. The legislation ends the practice of the state collecting dues check off payments for members of the North Carolina Association of Educators (NCAE).

The reaction from NCAE members was swift. On the day the legislation was approved, NCAE President Sheri Strickland issued a statement, "The Association believes the passage of this legislation - an override of Governor Perdue's veto -- to be a retaliatory action against NCAE for standing up for public school students and educators. The message from the legislature is clear - if you stand against cuts to public education, we will teach you a lesson."

NCAE has constructed this theme of Republican retribution for NCAE's criticism of the majority party's education policies. That explanation ignores relevant facts:

Dues check off was ended because the practice aided the radical policies of groups like the National Education
Association (the parent group of NCAE) not the interests of children.

NCAE portrays itself as having members from both political parties and as supportive of both Republican and
Democratic candidates. A look at NCAE's contributions to political campaigns, however, reveals 99 percent of
NCAE political contributions went to Democrats.

If NCAE is truly concerned about teacher salaries and securing more classroom funding, why has NCAE
executive compensation increased 24 percent from 2006-2009 while, over the same time period, the salary of
the average teacher in North Carolina only increased 12 percent?

With the final passage of SB 727 courtesy of the veto override, now is an appropriate time to re-visit a May 2011 Civitas analysis of NCAE Executive Compensation.

The following article was published on the Civitas Institute web site on May 4, 2011

For a link to this article's press release, click here: for New Civitas Analysis Highlights Growth in NCAE Executive Compensation

The North Carolina Association of Educators (NCAE) portrays itself as concerned with the interests of students and public education. Don't be fooled by the rhetoric. NCAE represents the interests of approximately 50,000 teachers and public school employees who pay them. NCAE tax documents state the real purpose of its mission:

"To advance the interests of the teaching profession"2

While Schools Suffer, NCAE is Immune from Current Economic Hardship

Over the past several years, NCAE has bemoaned declining average teacher salaries, the loss of ABC Bonuses and rising insurance premiums. However, NCAE seems immune from these troubling trends.

In 2009, NCAE took in more than $11 million in total revenue,3 including $8.8 million in membership dues

Total compensation for the top four NCAE executives increased on average 24 percent between 2006 and
2009. Over the same time period, the average teacher salary and compensation in North Carolina increased
about 12 percent.6

NCAE and Your Money

NCAE is classified as a 501(c) 6 tax exempt organization. Among other things the designation allows for lobbying and contributions to political campaigns. NCAE joins hands with its parent organization National Education Association (NEA) to influence political campaigns. The NCAE Constitution requires NCAE members to be members of NEA, the largest teachers union in the nation.8 Membership in NEA requires even more membership dues. This fall teachers will pay an average of $237 to NCAE and $178 to NEA for annual dues.9

In 2009 NCAE made $710,716 in nondeductible lobbying and political expenditures11

NEA spent another $1.7 million on campaign ads for Bev Perdue.

Such giving patterns would lead one to conclude all teachers are liberal. Are they? 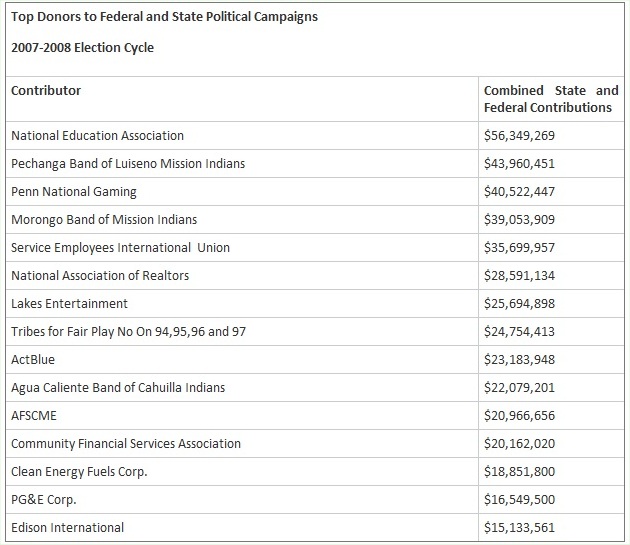 Source: National Institute for the Study of Money in Politics. Data available from www.followthemoney.org

The goal of NCAE and NEA is to protect and advance the interests of its members. These goals are achieved
through higher pay and improved working conditions. Assuming teachers are not likely to receive a pay
increase in the current state budget, teachers will not have received a pay increase for three consecutive
budgets. What do stagnant teacher salaries and the threat of massive teacher layoffs say about the success of
those efforts?

Not all teachers have the same political views. Yet NEA and NCAE political contributions are overwhelmingly
to one party. Do you support union leadership ignoring views that differ from its far left agenda?

Between 2006-2009, NCAE executive salary and compensation packages have increased 24 percent. During
the same time period, average salary and compensation for NCAE teachers in North Carolina increased only 12
percent. NCAE teachers have not received a salary increase in either of the last two budgets and most likely will
not receive one this year. NCAE-backed candidates suffered numerous defeats last fall. Considering the lack of
success, what justifies the high levels of compensation by NCAE executives? 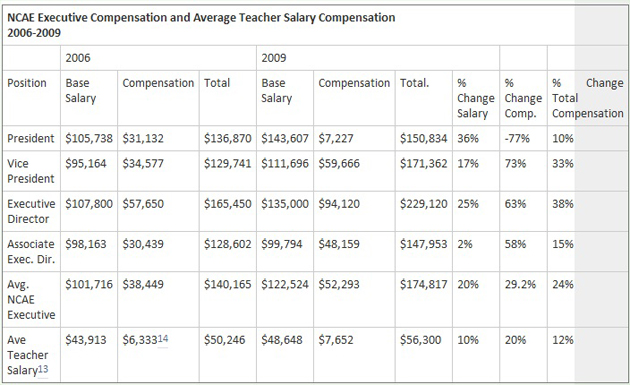 13. Average Teacher Salary figures are from Highlights of North Carolina State Budget for appropriate years.
Figures also include base compensation supplements as noted

14. Compensation figure for 2006 and 2009 includes Medical Benefits and Retirement as allotted per year.
Note: All figures for NCAE Executives from 2006 and 2009 IRS Return of Organization Exempt From Income
Tax, Form 990.