Love of Country, Knowledge of Duty | Beaufort County Now | Today I saw a bumper sticker that read: I Love my country. I just don't trust my government.

Love of Country, Knowledge of Duty

Login to Send a Private Message to Stan Deatherage
Today, I saw a bumper sticker that read: "I Love my country. I just don't trust my government."

While I tend to champion that very view on a more shallow, quirky and fun level, on the more deep, resonating to an absolute truth plane, that same bumper sticker could have actually just as easily suggested: "I am resolute in my core traditional values, I'm just not so sure that you can depend on me to know what those values are."

The allegorical meaning here is that aforementioned bumper sticker suggests that we Americans are far removed from our government, at all levels, and it is these governments' responsibility to prove that they are worthy of us before we will become involved in its betterment. In a true republican form of government, this republican form of government, the converse of that bumper sticker is actually true. Therefore, we must first prove ourselves worthy to deserve this Republic, and consequently, becoming involved in our government, at some level, is that first step in proving our worth as American citizens.

In the United States of America, this is the manner in which our government operates. This is not my opinion, this is the inarguable fact as to how a Republican form of government works: The citizenry is the government, and they are responsible for its faults and its successes.

Lately there have been few successes. Possibly, we are at fault. 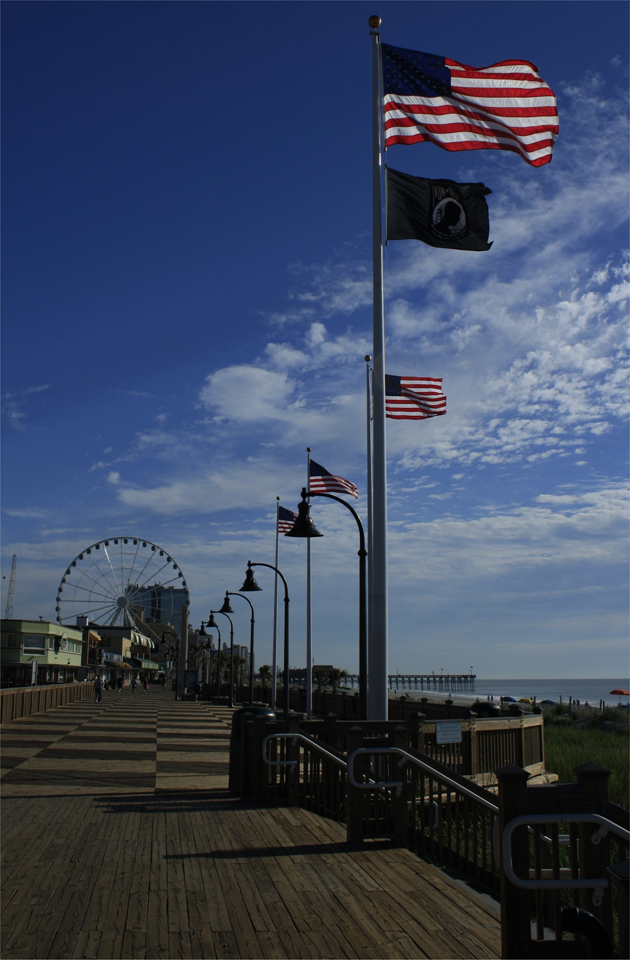 Myrtle Beach is the perfect personification of what is good and real about America: Historically, eastern South Carolina has long supported the military, with a number of bases stretching east from Columbia, SC, and nearly the entire length of U.S. Hwy. 17. Myrtle Beach: What a beautiful place to protect. It represents a way of life that some Americans are beginning to now take for granted: Above.     photo by Stan Deatherage

If you are of an age when you can expand your citizenship, and become a functioning member of the electorate, you are an officially integrated thread weaved into fabric of the republic, but only if one chooses to participate.

With participation comes great responsibility, even at this primary level: one must become educated on the issues, one must know the politicians and one must vote. At this level of participation, one must stay informed, one must pick wisely their political champion, and at the risk of abject redundancy, one must vote.

If one is to truly participate, there remains a secondary level of citizenship, where they must develop an understanding of the basis of who they are in their relationship to their nation and their community, and when called upon, to publicly express it. Our 1st Amendment Right to Freedom of Speech allows that possibility, and our citizenship demands it from us. In this regard it is important to be polite, and, whenever possible, intelligible, but this is basic citizenship - it is our most fundamental responsiblitiy.

At the tertiary level of participation as an American citizen, it is necessary for that citizen, who wishes to effect real meaningful change, to seek politicians who express a similarity of core beliefs. In this Republic, politicians speak for you, and with a much greater power because of their office. That is why it is so important to elect the politicians that share your strong core values. Moreover, if that candidate shares your core purpose in this Republic, it is essential that you provide support for that candidate's election or re-election, or the system will not work for you, and your core beliefs.

Contrary to the public's belief, all politicians are different: Some actually care strongly about their prescribed duty, and yet, often others are not salvageable. It is up to you to know the difference, and, accordingly, do your part to effect transformational change in your community, your state, this United States of America.

And finally, one can actually seek elected office; however, it is the height of narcissistic hubris for one to do so before completing the first three levels, and yet, to skip the indoctrination into core citizenship is the norm rather than the exception. Maybe this is why there are so many terrible, unsalvageable politicians.

There are many societal / structural faults that further the poor positions of politicians and the electorate that keeps them in office. Generally, it is a lack of real knowledge.

In North Carolina, which is my area of expertise, the vast majority of fault lies at the twin feet of two overwhelming Liberal establishment entities, who are more political than persuasive, and have little regard in upholding the primary precept for their origination: The media and the education industry. Furthering fundamental knowledge should be their first advocacy of a higher calling, but their recent behavior has proven not to be the case.

While there are exceptions to this broad accusation, sadly, there are far more who populate these two establishments, who are not capable of shining the light of truth upon those under their charge. And while it was never intended to be this way, it is most real, and will have to be transformed if American citizens could ever take their nation back and make it their own, as was intended by our Founding Fathers.

After all, it is your nation, our government, and we are all to blame if it does not work. That is the way a proper functioning republic works.

Publisher's note: In the next installment, we will take a good hard poke at the education industry and the Liberal media, and then ourselves to understand the bases of what needs to be fixed, before we can further the salvation of this republic - the Unites States of America. In the immortal words of Charles Dickens's Tiny Tim, "God bless us ... everyone."
Go Back