Published: Friday, August 31st, 2018 @ 10:21 am
By: John Locke Foundation   ( More Entries )
Publisher's note: The author of this post is Dan Way, who is an associate editor for the Carolina Journal, John Hood Publisher. 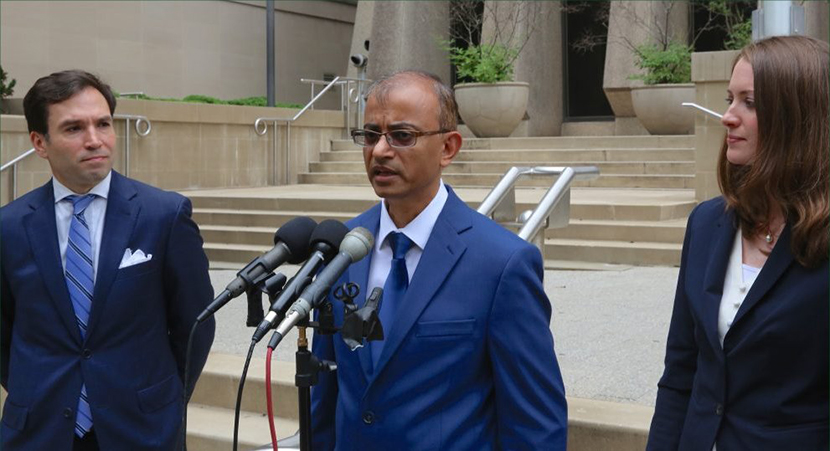 At a July 31 press conference, Dr. Gajendra Singh, a Forsyth County surgeon, discusses the lawsuit he has filed challenging certificate of need laws. At left is Raleigh attorney H. Denton Worrell and at right is Institute for Justice Attorney Renee Flaherty. (CJ photo by Don Carrington)

Dr. Gajendra Singh wants to help patients get an MRI scan for a fraction of the price hospitals and big health care networks charge. But state regulators and powerful lobbying allies restrain him.

On Monday, July 30, Singh joined with the Institute for Justice to file a lawsuit in Wake County Superior Court seeking to block certificate of need laws that prevent him from buying an MRI scanner for the Forsyth Imaging Center he founded in Winston-Salem in 2017.

The lawsuit claims CON laws are unconstitutional, and have been struck down once by the state Supreme Court. It contends CON laws suppress economic liberty, violate Singh's constitutional due process and equal protection rights, and violate the constitutional exclusive emoluments clause. That clause bars granting special privileges or profits to some while prohibiting them to others.

"It's the basic right to earn an honest living, and it's a right that's under assault in America every day," Renee Flaherty, an IJ attorney, said at a Tuesday press conference. She called North Carolina's 25 CON regulations among the worst of 34 states that still impose them.

"DHHS has not been served, and we do not comment on matters of litigation," said DHHS spokesman Cobey Culton.

"Our office needs more time to review the lawsuit complaint, and does not have any comment at this time," said Moore spokesman Joseph Kyzer.

"North Carolina's certificate of need law has been an effective tool to ensure access to care, and prevent underutilization and duplication of services that can lead to higher health-care costs," said Julie Henry, vice president of the N.C. Healthcare Association representing hospitals and health systems.

"The law is actively managed by a regulatory panel of health-care industry experts that make policy and need recommendations to the governor every year. In other states, repealing CON laws has been proven to reduce access to care for rural and underserved populations," Henry said.

"NCHA and our members have been and continue to be supportive of efforts to modernize the application and appeals process, while maintaining the law and protecting access to critical services in our communities," she said.

Many doctors support repeal of CON laws, and have given testimony contrary to hospital lobbyists' remarks at state legislative meetings on CON repeal in recent years. But officials at the N.C. Medical Society said they weren't aware of the lawsuit.

At the press conference, Singh and IJ attorneys rebutted hospitals' claims, saying 16 states including Texas and California repealed their CON regulations, and their health-care economies did not suffer.

Even if the the original justification for CON laws was to control health-care costs and provide greater access, "that hasn't been the reality since these laws have been in effect," said IJ attorney Josh Windham. He said the federal government repealed its CON, acknowledging the regulations were anti-competitive and drove up costs.

Singh, an award-winning general, abdominal, and cancer surgeon certified by the American Board of Surgery and a fellow with the American College of Surgeons, has a CT scanner, X-ray and ultrasound machines. But the MRI scanner would allow him to get a clearer view of organs and tissues and diagnose problems more precisely when preparing patients for surgery.

Before getting the machine, he must obtain permission from a centralized planning agency in Raleigh. It decides whether new equipment, facilities, and services are needed.

Flaherty said the State Medical Facilities Plan determines whether a county service area needs additional services, but it's based on "a kind of obscure formula."

The preliminary 2019 state plan says another MRI scanner might be needed, but the final document hasn't been written.

Singh said the county-based needs formula hurts patients. Some of his patients must drive two to three hours from Virginia, Charlotte, Raleigh, and Boone to access his services.

Dr. Richard Bruch, an orthopedic surgeon who served on the State Health Care Coordinating Council, has similar complaints about SHCCC's anti-competitive nature. He contends taxpayers and patients pay hundreds of millions of dollars extra a year, including $250 million annually to the State Health Plan.

Windham said the state Supreme Court struck down North Carolina's 1971 CON law in 1973 on the same grounds as Singh's challenge.

The General Assembly reinstated the CON system in 1978. The new law cited findings of fact stating, "CON laws are needed to keep prices low for patients, and keep access to care broad. That has not been the reality of CON laws across the country, or in North Carolina," Windham said.

"The prices weren't transparent. Patients couldn't figure out their out-of-pocket costs up front, and they were often hit by multiple bills in the mail months later they weren't told they were going to have to pay for," Windham said.

Singh said he received a $1,200 bill for a personal ultrasound last year. He said it was an excessive charge, and that "kind of pushed me over the edge" to file his lawsuit. "My goal in life is to provide the community affordable care" regardless of race, income level, or other factors.

He said he offers MRI scans for an all-inclusive $500 price on a machine he rents two days a week. He said if he were able to buy an MRI scanner, he could reduce his charges and continue providing the low-price procedures to more people in need.

An MRI scan at a hospital could cost more than twice as much, and CON hospitals set similar, noncompetitive prices, Singh said.

Getting rid of CON laws would give patients more options at lower prices, forcing hospitals to follow, Singh said.
Go Back