Login to Send a Private Message to Hood Richardson
Interesting things going on in North Carolina about transportation. We now have toll roads and ferry fees. The General Assembly when it was under the domination of Democrats and frantic to create new sources of revenue delegated study commissions to find innovative ways to raise revenue for the Department of Transportation. They needed more money to spend on welfare and social programs. These guys never thought about "just spending less" and encouraging more people to "get a job".

The study commissions did a poor job for tax payers. They presented: ferry fees, toll roads both public and private, odometer taxes and letting counties get into the road building business. There were a lot of other schemes to "make the public pay". This, in a state that already has high gasoline taxes earmarked for transportation. Each of these sources of tax money has serious public policy issues.

I am hearing rumors that it may cost ten bucks to cross the Pamlico River on the ferry. At one time toll roads were widely used in North Carolina. They were finally taken over by the State because of corruption. An odometer tax would be based on how many miles you dive each year. This would get those who use electric cars or hybrids because they pay less gasoline tax. Would you pay for those miles you drove out of state? Allowing counties to get into road building, would require an increase in the size of prisons. There would be a lot of dishonesty. I know commissioners know how to do deals that help them selves and their family members but they don't know anything about engineering design and road building. 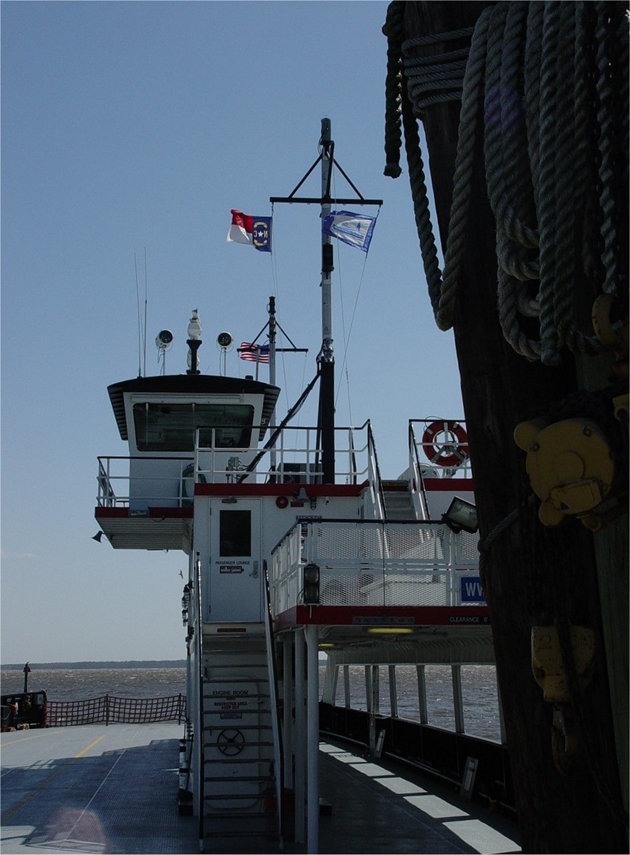 Ferry boat that crosses the Pamlico River from Gaylords Bay to near PCS.     photo by Stan Deatherage

We have forgotten our history. North Carolina was one of the first states (during the 1930's) to take over all road building. The take over provided for the economies of central engineering and state wide design standards. This improved safety and gave us a road system that served the entire state. For all of our complaining it is still, if not the best, one of the best in the nation.

We need to look at two things. First, we should modernize and make the present Department of Transportation work efficiently. Fewer Department of Transportation employees would be a start. We could contract out more of the work. Second, we have been using less gasoline each year than the year before for the past three years. We are down more than ten percent. Does it not stand to reason that we need less road construction and maintenance? We are still trying to maintain the rate of building and maintenance we had at the peak of the recent boom. More drastic cut backs need to be made. We can do more with less.

Now, there is an uproar in Halifax County because toll booths are being proposed for I-95. The Department of Transportation and the Legislature say this is an innovative way to fund the needed improvements to I-95. Halifax County is afraid a lot of motorists will plan trips to avoid toll roads and they will loose lodging, food and sales tax revenues. They are putting together a fund to lobby against toll booths on I-95.

Our recently elected legislators need to be aware that these schemes were dreamed up by a Democrat dominated legislature and they have simply signed on to a bad idea. Why not try cutting some costs in government instead of always seeking more money from the tax payers.
Go Back