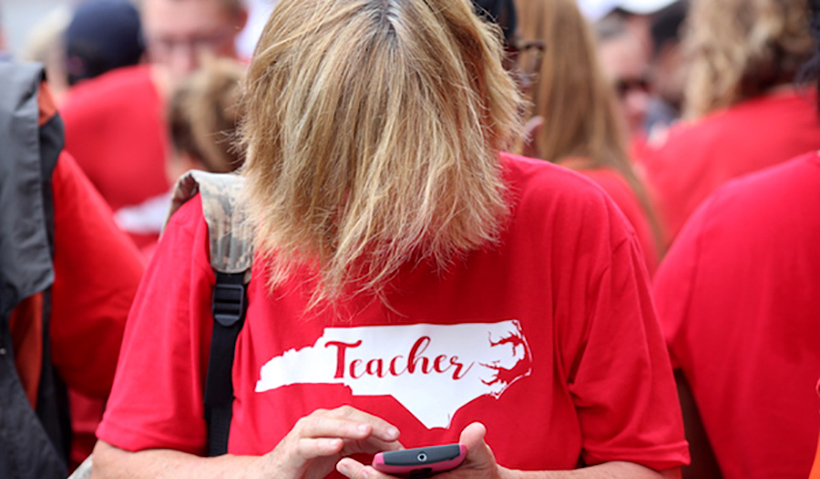 A participant in the March for Students and Rally for Respect last year in downtown Raleigh. (Photo by Don Carrington)

Once again teachers will descend on the state capital to call for more public school funding, Medicaid expansion, and a $15 minimum wage for all school workers.

The North Carolina Association of Educators, in partnership with several other advocacy groups, is planning a teacher march May 1 in downtown Raleigh.

Because so many teachers have requested time off, some school districts have announced plans to make May 1 an optional teacher work day. On April 8, Durham Public Schools announced its intention to cancel classes. More than 550 teachers have asked for time off for the start of May.

"On a typical day in May, DPS has 213 teachers absent. We are able to muster approximately 167 substitute teachers on such a day," the district said in a news release. "At this time, given the lack of available substitute teachers and the likelihood of more requests for personal leave, it will not be possible to have adequate student supervision or instruction on that date."

State Superintendent Mark Johnson has urged march organizers to pick another day for the event.

"The protest organizers should choose a non-school day," Johnson said in a statement. "The legislature will be in session in Raleigh for at least another three months, a time period that spans dozens of days students are not scheduled to be in school, including spring break and summer break."

Johnson voiced concerns that closing schools would undermine classroom instruction and hurt students who rely on schools for meals.

The focus of the march includes several demands: