A move to ease restrictions for N.C. craft brewers who want to distribute their own beer is on the verge of becoming law. craft brewers, senate, governor, roy cooper, may 21, 2019
Home
Categories
Login 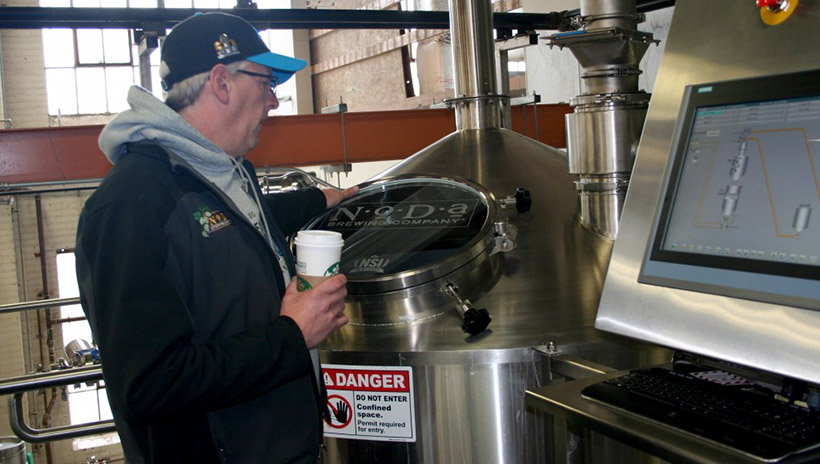 A move to ease restrictions for N.C. craft brewers who want to distribute their own beer is on the verge of becoming law.

The N.C. Senate in a 38-3 vote Monday, May 20, passed the Craft Beer Distribution and Modernization Act, the result of a compromise among mid-sized craft brewers and the N.C. Beer and Wine Wholesalers Association.

That bill, House Bill 363, maintains the current three-tier system - producers, wholesalers, and retailers - and adds a new, mid-level classification of brewers to state law. Brewers, under the proposal, could self-distribute 50,000 barrels of their products, as opposed to the current 25,000. The legislation also gives growing brewers more flexibility in choosing where and how to distribute their beers around the state.

Breweries that exceed 50,000 would not lose the ability to self-distribute, although the new law would affect only those breweries that sell fewer than 100,000 barrels of beer per year. Now, if a brewer sells 25,001 barrels per year, by state law, every barrel produced - including the first - must go through a third-party wholesaler/distributor.

Lawmakers, distributors, and brewers have publicly cheered the bill's progress. But the bill's path has been anything but clear, as lobbying efforts and legal battles have served to sidetrack similar measures for the better part of a decade.

In the end, it may have taken a lawsuit.

More than a year ago, some North Carolina craft brewers took on in court the state's Alcoholic Beverage Control system and a well-funded and entrenched network of wholesalers and distributors.

"This historic proposed legislation would end the lawsuit if adopted," Erteschik said in the March news conference. "This legislation would be basically the reconciliation of any differences these parties have had and there would be no need to continue."

The beer measure has an excellent chance of finally becoming law, although efforts to raise the distribution threshold have been, well, brewing for some time now.

"Since I've come here we've had this conversation," Sen. Rick Gunn, who has served in the General Assembly since 2011, said before Monday's vote. Gunn, R-Alamance, commended lawmakers for pushing the bill forward.

House Bill 500, which Gov. Roy Cooper signed into law last year, originally included a provision allowing craft breweries that produce more than 25,000 barrels of beer a year to self-distribute, if they chose to do so. That provision, along with one making it easier for breweries to terminate their contract with distributors, was stripped from the bill after fierce objections from the N.C. Beer and Wine Wholesalers Association.

Before that, lawmakers introduced bills to increase the cap to between 60,000 barrels and to as many as 200,000 barrels. Those efforts failed.

In a joint statement Monday, Tim Kent, executive director of the N.C. Beer and Wine Wholesalers Association, and Suzie Ford, a founder of NoDa Brewing Co. in Charlotte, says H.B. 363 is a collective win for all parties involved.

"The overwhelming majority support of the passage of the Craft Beer Distribution & Modernization Act is an important step forward for the beer industry adding to existing opportunities for brewers in North Carolina," the statement says. "H.B. 363 provides greatly-expanded legislative support for the state's beer franchise law and the three-tier system. As North Carolina's breweries continue to grow, we welcome today's regulatory achievement."