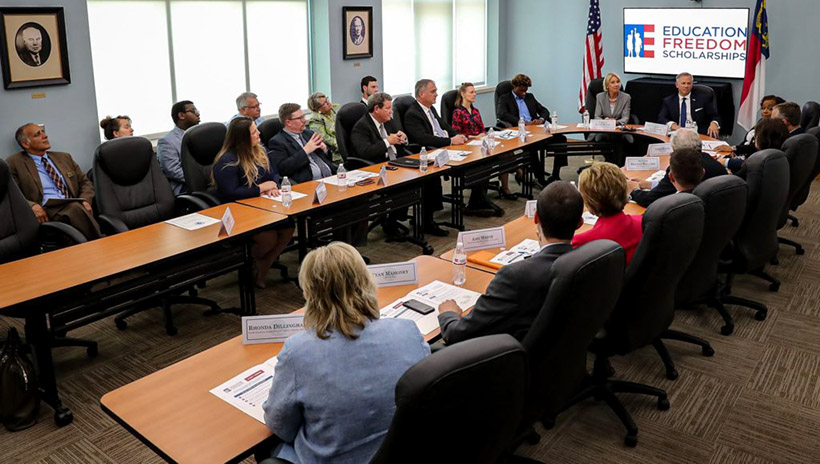 The idea from the U.S. Department of Education is designed to enhance school-choice efforts.

If approved by Congress, the proposal would grant $5 billion in tax credits to individuals and businesses who donate to 501(c)3 nonprofit organizations supporting the efforts of private school scholarships, homeschooling, apprenticeships, and other supplemental educational activities. The activities include bringing online courses to public school students.

North Carolina could expect to get up to $162 million if all 50 states participate.

"Leaders in North Carolina are working to provide more students with educational freedom, and the secretary wanted to encourage that effort and also let local leaders know how the scholarship program could help supplement and enhance these efforts," said U.S. Department of Education spokeswoman Liz Hill. DeVos has also promoted the proposal in California, Kentucky, Tennessee, and South Carolina.

With a Democratic House of Representatives and a Republican Senate, the chance Congress would approve the proposal appears slim. But, if passed, how would it affect North Carolina?

North Carolina's educational landscape embraces school choice as more parents continue to seek non-district based options for their children. DeVos' plan would serve as a tax credit rather than a voucher program, providing a new revenue stream for nonprofit school-choice organizations.

As a tax credit, the proposal minimizes the role of the federal government, assuaging concerns from both cultural conservatives fearful of curriculum requirements and others wary of government funds supporting sectarian institutions that hold conservative viewpoints on hot-button issues including abortion or LGBT rights.

The tax credit isn't a blank check for nonprofits such as Parents for Educational Freedom in North Carolina, however. For a nonprofit to take advantage of the proposal, it must meet three requirements: be a registered 501(c)3; be chosen by its state; and have less than 10% of its operating budget spent on administrative costs. Most organizations shouldn't have much trouble meeting the first two requirements, but the last one can be tricky.

The U.S. Department of Education didn't respond to questions about whether the proposal would require extensive oversight, including annual audits, data collection, and reports. Nor did the department say whether it would impose new restrictions on the activities of 501(c)(3) organizations, such as lobbying or advocacy.

If extensive oversight requirements are imposed, it may be difficult for many organizations to keep their administrative costs below 10%. And if the proposal limits lobbying and advocacy activities by nonprofits, many may either shift these activities to affiliated organizations that don't have these limits, establish new organizations with lobbying or advocacy missions, or simply focus on providing resources and scholarships.

The full effects of the proposal wouldn't be felt for awhile, though, as states would have to choose to opt into the tax credit.

"The Trump administration has introduced an initiative that has broad support among families and the education reform community." said Dr. Terry Stoops, vice president of research and director of education studies at the John Locke Foundation. "If Republicans retake control of Congress, then a coalition of school-choice advocates will be ready to help the law cross the finish line."

Said DeVos, "I think that educational freedom is an inevitability. It's not a matter of if, but a matter of when."