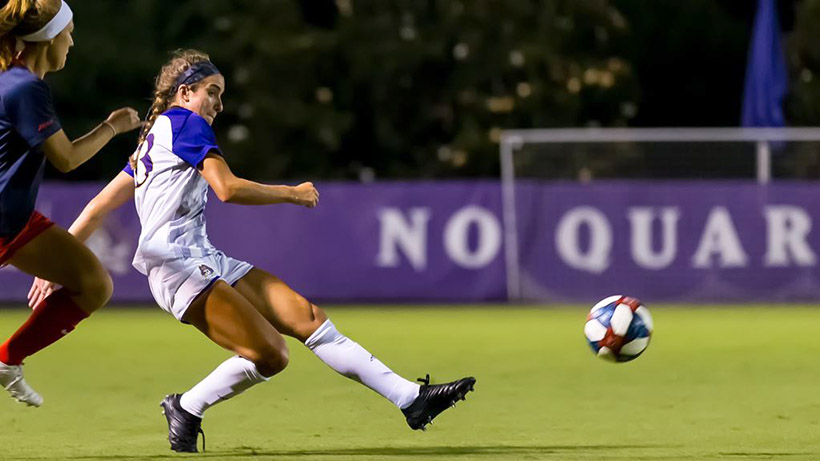 "We have to give credit to Richmond, I thought they outworked us tonight and deserved to get a result against us," said head coach Jason Hamilton. "This is something that we have to learn from moving forward. That is who we were last year, the team that went out and battled and outworked our opponent. We have a lot of areas that we didn't show discipline in tonight and as a group we have to be focused in getting better in those areas each day."

The Pirates were on the front foot in the first half, but could not create many meaningful chances. ECU took eight shots in the period to Richmond's three, but Richmond had the only two shots on goal of the first 45 minutes.

The best chance of the opening stanza came when a long ECU pass was played into the Richmond box. Cashlin Copley was able to control the ball and spin towards goal, but could not get a shot off.

In the second half, a mistake allowed Richmond to take the lead in the 54th minute. Katie Tritt pounced on an ECU pass just outside the Pirates' box and quickly moved the ball forward to Alyssa Walker. Walker wasted little time, sending a right-footed shot past a diving Melanie Stiles and inside the near post to give the Spiders a 1-0 lead.

With nearly 40 minutes remaining, the Pirates continued to press forward, looking for the equalizer. First, in the 66th minute, Cashlin Copley raced down the right hand side, but her shot bounced off the crossbar. 11 minutes later, Jayda Hylton-Pelaia got behind the Richmond defense after a pass from Sophia Demark, but her attempt was smothered by the Spider goalkeeper.

With less than 10 minutes remaining, the Pirates finally got their breakthrough. Hylton-Pelaia took a throw-in on the right side which reached the feet of Draovitch nearly 25 yards away from goal. Given space, Draovitch attacked the goal before letting loose an effort with her left foot from just outside the box. Her shot curled in just between the far post and the Richmond goalkeeper to tie the game.

After neither team could take the lead in regulation, the contest went to overtime. Both teams had chances to end the game, as both squads took three corner kicks during the first overtime. In the second overtime, ECU took the only two shots and had another corner, but could not score.

"Our schedule only gets tougher from here on out, and I think we are still hanging on to last year's success," added Hamilton. "We have to focus on right now and improving each and every day. We tell the team all the time the best teams are the most consistent teams and I think that is an area we can grow in drastically. We did not show in this game like we did on Thursday or in our exhibition game. We showed good fight after they scored and put them under pressure until we equalized, and we also fought hard in the second overtime. You can't turn it on and off if you want to be a successful program, it has to stay on all the time. We will move on and put this one behind us hopefully as motivation to be the team we are capable of being."

The Pirates finished with a 20-10 edge in shots while Richmond had an 8-7 advantage in corner kicks. ECU had 61% of the game's possession as well. Stiles finished with two saves in the goal for ECU while Jessica Stanfill made three stops for the Spiders.

ECU will hit the road for the first time for a pair of games next weekend. First up will be a Friday night matchup against Virginia, with kickoff scheduled for 5:30 p.m.

You can view the recap, photos, and box score of the game by clicking HERE.
Go Back