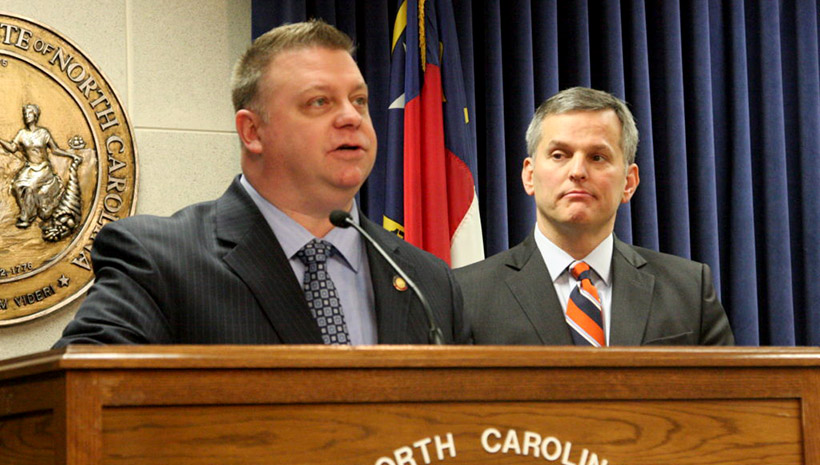 Rep. Jason Saine, R-Lincoln, denied claims from Democrats and some media outlets that he helped carry out a plan to mislead House Democrats into not showing up to an early morning session so House Republicans could more easily pass a veto override of the budget.

At a Wednesday news conference, Gov. Roy Cooper said Democrats "were told there would be no votes this morning. This was a bald-faced lie."

Lewis and Speaker of the House Tim Moore, R-Cleveland, deny claims they lied or misled any members into believing no votes would be held that morning. In a news conference, Moore said he had long promised to hold a vote on the budget veto override whenever the opportunity presented itself. The veto override had been on the House calendar for months.

New claims emerged Thursday, Sept. 12, accusing Saine and Moore of colluding to mislead House Democrats into not showing up for the 8:30 a.m. session Wednesday.

Thomas Mills, founder and publisher of PoliticsNC, posted a blog saying Lewis informed Republican leadership that he told Jackson there would be no votes the morning of Sept. 11. Mills claims Saine sent an email to the Republican caucus late Tuesday night telling them to be at Wednesday's 8:30 a.m. session.

When Carolina Journal asked about the evidence he had to support the blog post, Mills backed away.

"I probably should not have said Saine sent the email," Mills said in a message. "And it may have been a text instead of an email. However, something definitely went out telling GOP members to be in session yesterday morning. Whether it went to all members or just select ones, I don't know."

CJ reached out to eight House Republicans asking whether they received such an email. At time of publication, only Rep. Michael Speciale, R-Craven, responded. Speciale simply said no.

Saine told CJ he didn't send an email. But if anyone in leadership did, it's standard practice to remind lawmakers to show up to work on time.

"We showed up to work, that's what we do," Saine said. "We were all scheduled to be in the chamber. It's a practice we have done the entire time given this veto override session. I don't know why that's a conspiracy."