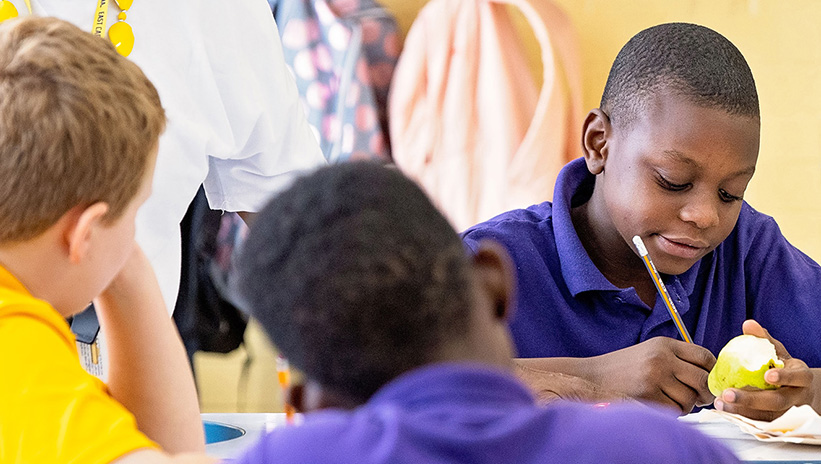 "Each student has what they call a projected score and they say in order for a child to grow one year, this is the projected score that they have to hit," said Tracy Cole, principal of the Community School. "In terms of meeting expected growth that means overall the children grew at least one year, but we were so close to exceeding growth, meaning we went above and beyond what the state expected."

Cole said that she was most proud of the growth. "I've seen children come in from some really tough situations, children that we have had to comb their hair in the morning or wash their face or take them over to South Greenville and let them take a full shower. We've had to wash their clothes," she said. "When you think about having to meet those primary needs and then seeing the growth they've made here, that speaks volumes about the work that the faculty and staff have done here at the Community School. Because until you meet those basic needs, teaching and learning is not a priority." 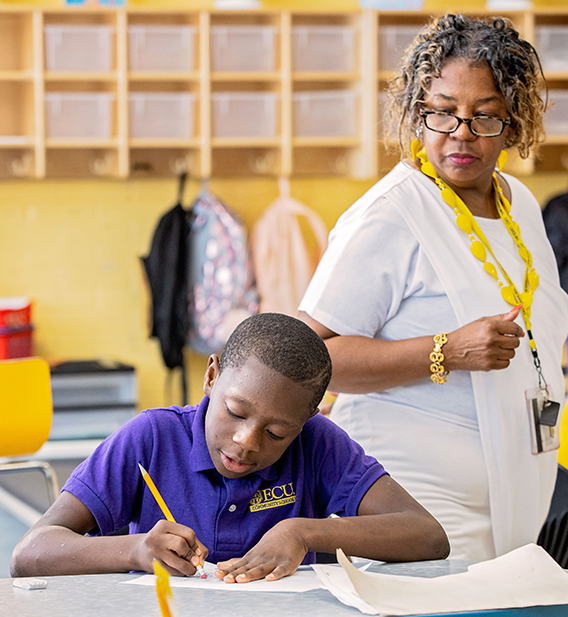 Dora Ellison checks in on Corey Little in a third grade class at the ECU Community School.
The school opened in fall 2017 in a renovated wing of South Greenville Elementary School through a partnership with Pitt County Schools. The UNC System picked East Carolina University to operate one of the first lab schools in the state. The schools are designed to improve outcomes for at-risk students from low-performing schools.

While the ECU Community School received a performance grade of F, Cole was still excited about the state results.

She explained that the state calculates school performance grades on proficiency and growth, with proficiency on end-of-grade tests composing 80% of the score.

The Community School's founding guidelines stated that students accepted into the school had to have attended a low-performing school and had to be academically at-risk. Cole said that the students have had challenges since they began their school careers.

"Our job is to go in and identify the levels at which the student is performing and grow them from there," she said.

The state tests children in third, fourth and fifth grades and those students began their education at other schools. The school has expanded to K-5 and, according to Cole, her teachers are laying an educational foundation early for their kindergarten students.

"As they move up into third grade, you should see a tremendous difference," said Cole, "because we're starting with the youngest ones."

College of Education Dean Grant Hayes was pleased with the performance data.

"We continue to be excited by the significant achievement growth of our ECUCS scholars," Hayes said. "Under Ms. Cole's leadership, the school's teachers and staff have created an effective learning environment with high expectations and clear goals as evidenced by these test results.

One of the areas that had higher levels of proficiency (57.1%) was the fifth-grade science test scores. In their reading test results, none of the children scored a level 3 or higher, which is considered proficient.

Cole and her team are employing new strategies to improve reading scores. "One of the strategies we are working on this year is building reading endurance," Cole said.

According to Dr. Art Rouse, associate dean of the College of Education, the growth component is crucial to student success. "Even if at the end of the day, if a child is not on grade level, it's still important that we get them there but that growth that we can see each year, they're going to get there if they stay with it," he said.

Rouse said that the growth showcases the work that goes on at the Community School.