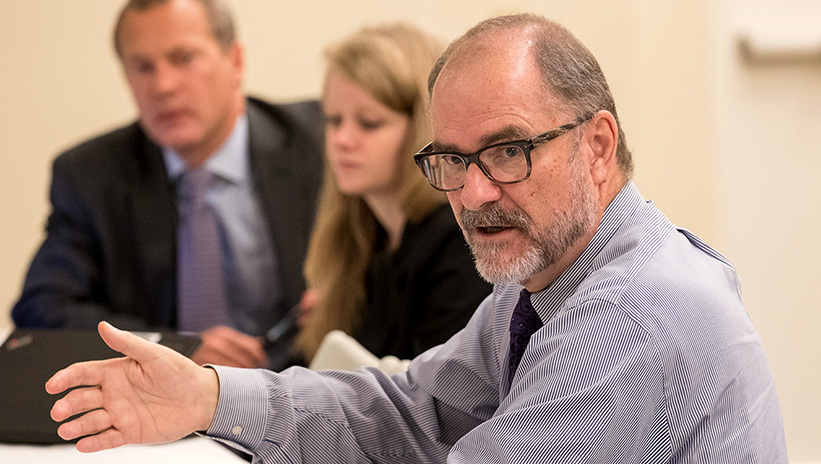 UNC System President Bill Roper on Thursday named Dr. Ron Mitchelson as ECU's interim chancellor. Mitchelson came to ECU in 1999 as a professor and chair of the Department of Geography. He has served as provost since 2015. | Photo: Rhett Butler | Video: Reed Wolfley

"I am pleased to announce the appointment of Dr. Ron Mitchelson as interim chancellor at East Carolina University, effective immediately," Roper said. "As a longtime member of Pirate Nation, I know Ron will do a great job leading the university while the ECU search committee begins the vital work of identifying the university's next chancellor."

Mitchelson, who came to ECU in 1999 as a professor and chair of the Department of Geography, has served as provost since 2015. He has also served as interim chair of the English department and interim vice chancellor for research and graduate studies. Over the course of each of these appointments, he has chaired numerous committees and been a part of work groups and taskforces. Before coming to Greenville, he held faculty and administrative positions at the University of Georgia and at Morehead State University in Kentucky.

"My 20 years at ECU have been, by far, the most rewarding years of my life," he said. "The university has afforded me so many opportunities to grow as an educator and as a leader.

"I am humbled and privileged to lead this great university, and I appreciate the responsibility that President Roper has entrusted to me."

As provost, Mitchelson serves as ECU's chief academic officer with oversight of academic programming, enrollment management, institutional planning and research, and equity and diversity. As interim chancellor, he said he remains committed to the university mission and will strive to make ECU a national model for student success, public service and regional transformation. 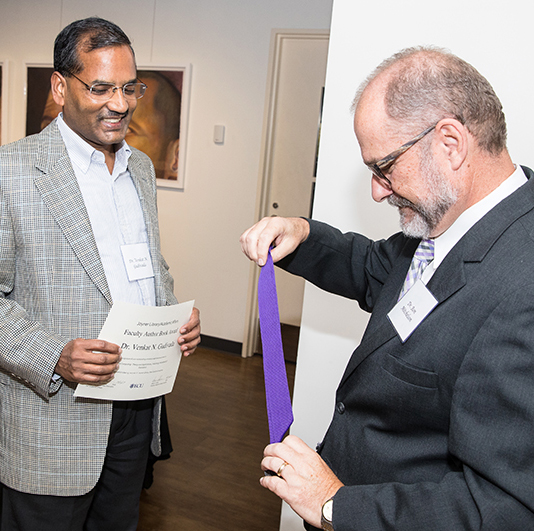 Dr. Ron Mitchelson, right, presents a Faculty Author Book Award to Dr. Venkat N. Gudivada. | Photo: Cliff Hollis
"While we face some significant challenges, I am excited about our recent successes and our expanding capacity to assist our students and the region," he said. "Last year we set records for the number of students graduated, the value of external grants and contracts, and we were named as one of the very best universities in the entire country by the Princeton Review."

He credits that success to the hard work of faculty and staff, and he said he wants to provide a stable environment "to continue the work that we have all come to ECU to accomplish."

"Working with faculty and students has been the single most joyful part of being at ECU," he said. "I have always been impressed with the level of teamwork that this university employs to accomplish its mission. Great teamwork leads to success, and Pirates are loud and proud in winning!"

Areas of focus include enrollment growth, promoting innovation and entrepreneurship in order to create jobs in eastern North Carolina, and strengthening the university's relationship with Vidant to benefit the people of the region.

Mitchelson embraces the university motto, "Servire," through his support of the United Way of Pitt County's Imagination Library program, which encourages childhood literacy.

"I believe Dr. Ron Mitchelson is the right Pirate to lead the university in the coming months as we search for a permanent chancellor," said Vern Davenport, chair of the ECU Board of Trustees. "His commitment to our students and the university's mission is evident to me in every decision he makes and the guidance he has offered me during my time on the board.

"His selection as interim chancellor provides needed stability on campus, allowing the board to be deliberate and thorough during the chancellor search process."

Mitchelson has served as acting chancellor since Sept. 30 and will serve as interim chancellor until the UNC Board of Governors completes its search for the university's next permanent leader.
Go Back