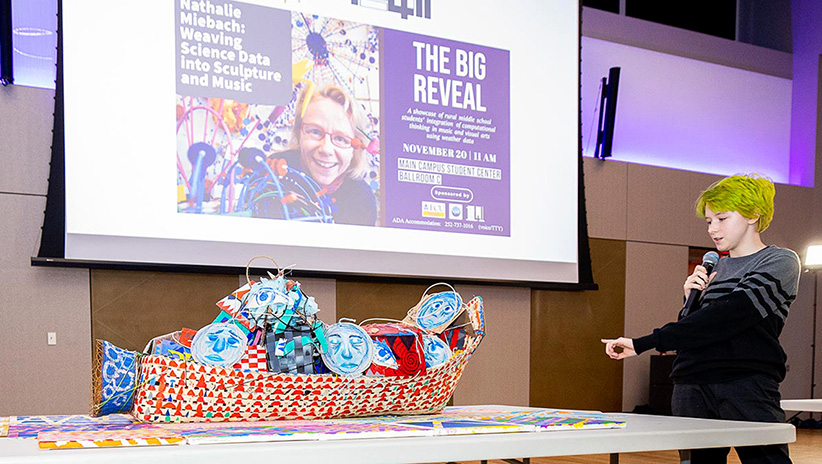 Students from Jones County show how they combined computer science with art in creating their boat. Zane Thomas, right, explains her process for designing the faces decorating the boat. | Photos: Cliff Hollis

When you think of art and music, computer science may be the furthest thing from your mind. East Carolina University College of Education's iCS4All project aims to change that.

"It's a fascinating display of how we can empower students utilizing both computational thinking and the arts and music to come up with real learning," said Dr. Matt Militello, the Wells Fargo Distinguished Professor in Educational Leadership in the College of Education.

Named "Integrating the Computer Science for All Initiative in Three Rural Eastern NC School Districts" (iCS4All), the project allowed middle school students to combine art and music classes with computational thinking, a set of problem-solving methods where students express problems and solutions in ways a computer could analyze and execute.

Professors worked with teachers in Sampson, Jones and Duplin counties to create student activities that integrated computer science into their art and music classrooms. In 2018, students in all three counties lived through the devastation of Hurricane Florence, which became the focal point of the students' work.

A $999,751 National Science Foundation grant funded the project, which is led by Militello and Dr. Martin Reardon, an assistant professor in educational leadership.

"I didn't think there was a snowflake's chance of getting the science foundation to fund something in music and visual arts," Reardon said.

Anne Haugh, the art teacher at Chinquapin Elementary School in Duplin County, worked extensively with Reardon on creating a binder of student activities.

"The visual artists, particularly Anne, have done really good stuff with introducing those concepts and using the approaches," Reardon said.

As part of the project's professional development piece, Haugh attended the National Art Education Association Conference in Boston in March, where she saw a demonstration by Nathalie Miebach, an artist who turns weather data into woven sculptures and musical scores.

Reardon arranged for Miebach to visit all three schools on Nov. 3-7 to discuss how she turns weather data into art and music, and to help students translate their own data and experiences.

Hobbton Middle School in Sampson County focused on translating Hurricane Florence weather data and student experiences into a musical score. Chinquapin Elementary School in Duplin County and Jones Senior High School in Jones County took student experiences with the hurricane and turned them into drawings and woven sculptures that would fit in and around a large woven boat created by Miebach.

"It was cathartic. The experience was one they'll always remember," Craig Sparrow, the art teacher at Jones Senior High School, said about working with Miebach. 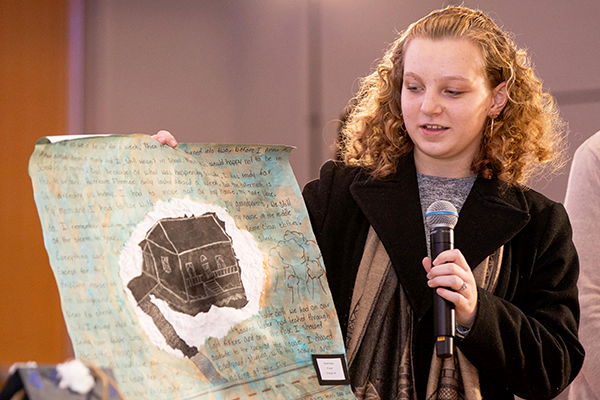 Hannah Dutton from Duplin County shows her artwork about her Hurricane Florence experience.
All three groups visited ECU's main campus on Nov. 20 for "The Big Reveal" where they showcased what they had been working on that school year to each other, ECU faculty and staff, and other guests.

"The fact that you would think about Florence in such a creative way is fantastic," Dr. Ron Mitchelson, ECU's interim chancellor, told the students. "This intersection of science and art is such a rich and rewarding place to be as an individual, but also for our region, our state, and our country to have thinkers like you."

The Jones County students created woven houses that were placed inside of the boat, which was decorated with symbols representing wind, tornadoes and rain. Zane Thomas, an eighth-grade student, created faces with different emotions that covered the outside of the boat.

"I just felt like each one was going to express a different emotion," Thomas said. "A lot of people didn't feel the same. Everyone had their own experiences, their own feelings."

The Duplin County students had a similar take on the woven boat art project with a few twists. Instead of putting all of their woven houses inside the boat, the students chose to put their houses in the boat if they weren't damaged by the storm and outside of the boat if they had been flooded.

They also used colors and symbols to showcase different parts of the hurricane such as flooding, winds and rainfall.

Students from Sampson County translated their hurricane experiences into graphic scores, which differ from typical music scores by using visual symbols instead of musical notes.

"We started with stories and the kids answered some questions about their hurricane experience. From the stories, they created drawings," said Rue Lee Holmes, the music teacher at Hobbton Middle School. "We discussed what happened during the storm, the different kinds of sounds they experienced. We talked about the rain, the thunder, the wind and what instruments would be good to represent those different elements."

Some of the musical scores used circles to represent wind and water droplets for rainfall. Several groups discussed using cymbals, rain sticks and thunder tubes in their music to represent the sounds.

During the event, students from ECU's School of Music interpreted the Sampson County students' graphic scores into four movements to show how weather data could be turned into real music. The students used the instruments they had talked about, like thunder tubes, to participate in the performance.

"I think this allowed them to see music in a different way. They are so ingrained, listening to music on some type of device and even just in our class, looking at music on a traditional music score with the notes and the staff," Holmes said. "To be able to look at what they created and to know this is also a music score and it can be translated into sounds, I think it just broadened their perspective on how we notate music and what music sounds like."

While ECU music students and faculty played the scores, dancers from the School of Theatre and Dance began a dance based on the students' experiences and the music. The room was filled with the slightly haunting tune that increased in speed and volume until both the musicians and dancers were performing at a fever pitch to symbolize the worst parts of the hurricane. The sounds slowly tapered off as the storm moved on until the room was silent.

"I was stunned with how the ECU musicians could interpret what the kids did," Reardon said.

The Big Reveal was one of the culminating events of the grant and the other event will take place this spring.

"The other culminating event will be using augmented reality," Reardon said. "To take the kids a step further and say now that you have this, how do we use augmented reality to enrich the art and music that you've done."

As part of the project, the College of Education has partnered with the School of Music, School of Art and Design, School of Theatre and Dance, and Department of Computer Science at ECU as well as The Friday Institute for Educational Innovation at NC State University.