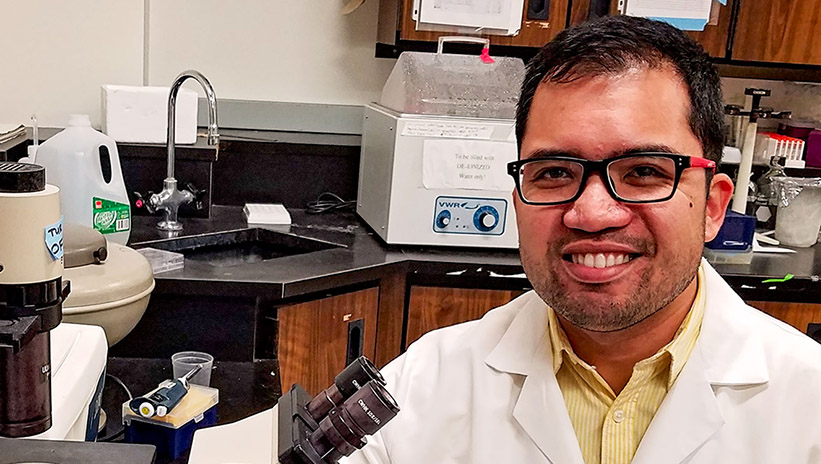 Byron Aguilar is studying how a group of signaling proteins called Rho GTPases, which play a role in several common cellular functions, might affect the development of not only cancer but also Alzheimer's disease.

He's been working on that for the past six years as a postdoctoral scholar in the Department of Anatomy and Cell Biology in the Brody School of Medicine at East Carolina University.

Postdoctoral scholars are researchers who have completed their doctoral degrees and are working with a faculty mentor to further their knowledge and skills. 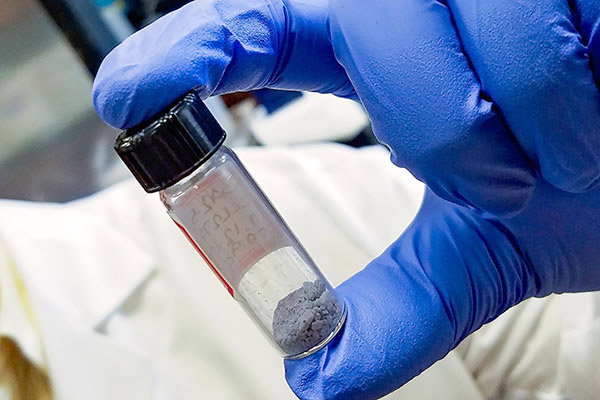 The ZCL compound is one Aguilar developed while researching cancer treatments.
Originally from the Pacific island of Guam, Aguilar was a graduate student at Florida A&M University and was presenting his research at a conference when ECU anatomy and cell biology professor Qun Lu began asking him about his work. And asking and asking.

"I was actually a bit annoyed by it all," Aguilar recalled. "At the end, he told me the reason he was asking all those questions is he was looking for a postdoc. So then I asked him if there was anything else he wanted to know."

Soon after, Aguilar arrived in Greenville. The National Cancer Institute funded his first few years of research, and the Alzheimer's Association is funding him now. That's because some of the drugs he developed, the ZCL compounds, have shown the ability to target the development of cancer cells as well as the cellular processes that lead to Alzheimer's disease. ZCL compounds regulate Rho GTPase activity.

"It's because of the support of so many people at ECU that I can focus wholeheartedly on research," he said.

Aguilar said his postdoc experience has given him a chance to work on the early stages of drug development as well as delve into the next step, which is animal testing. He also recently traveled to the M.D. Anderson Cancer Center in Houston for a business development workshop, which he said gave him a glimpse of what it would take to drive the development of his drugs to the next step, human clinical trials.

Aguilar will complete his postdoctoral work in December but might stay at ECU for further research, start a spinoff company with ECU collaboration or pursue an opportunity at another university or in industry.

"I'm trying to understand how these things are connected and how I can make a drug that can help patients," he added.

In addition to his research, Aguilar founded a postdoctoral grant review group to share his experiences in grant writing. He has given educational presentations to dementia care professionals and patient families across eastern North Carolina. He's also vice president of the Postdoctoral Association at ECU.

"Byron is a well-rounded scientist and person always willing to lend a helping hand," said Lu. "He is one of my best postdoctoral fellows over the past 20 years. Besides his devotion to research, he stands out in being a wonderful citizen of community."