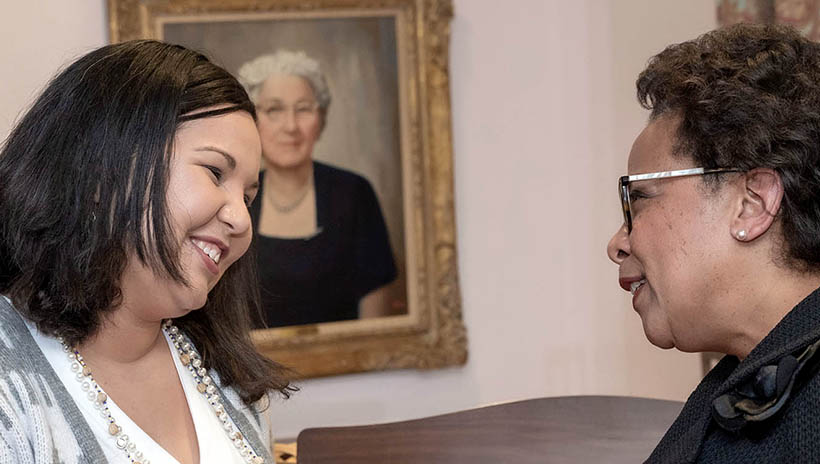 East Carolina University’s Aleshia Hunt, left, talks with Loretta Lynch, former U.S. attorney general, after receiving the Larkins Award, which goes to the state employee who best displays commitment to justice and equality in the workplace and in the community. Hunt works as a financial advisor for the Student Government Association as part of ECU’s student activities and organizations. | Photos: N.C. Department of Administration

Aleshia Hunt, a financial advisor in East Carolina University's Division of Student Affairs, learned the value of service from watching her grandmothers cook for the hungry and contribute to their communities through their churches.

"A lot of that was not monetary, but unspoken words and actions matter," Hunt said. "As a child, I may not have realized what was going on at that exact moment, but it was instilling those values in me from a young child until now." 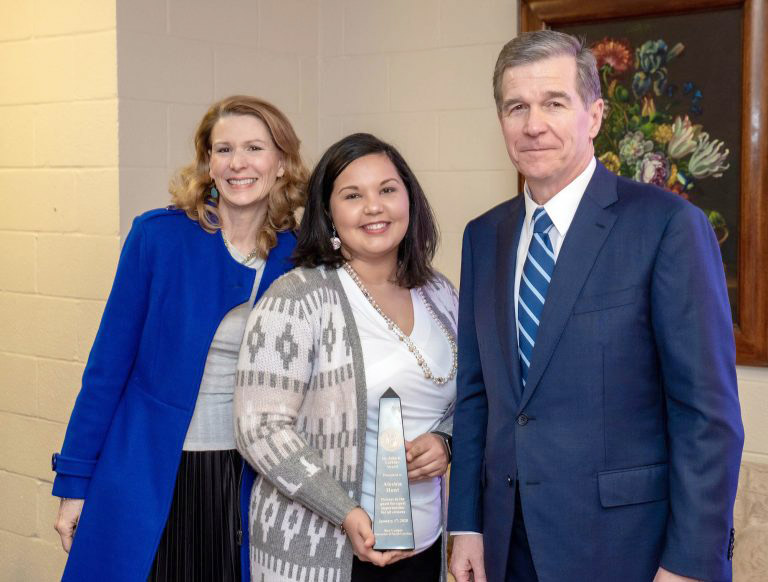 "I appreciate this so much," Hunt said of the statewide honor. "After reading up about the award, I thought 'am I worthy. Is what I have done enough to match up to Dr. John R. Larkins.' I appreciate whoever nominated me, and I look forward to continuing to work at the university and in the community."

Hunt said she attended the ceremony as one of the award's nominees, not realizing she was the winner.

"I was shocked," Hunt said.

In presenting the award, Susi Hamilton, secretary of the N.C. Department of Natural and Cultural Resources, called Hunt the "true embodiment of what it means to answer that persistent and urgent question of what we should do for others."

A member of the Lumbee Indian tribe, Hunt helped start ECU's chapter of Sigma Omicron Epsilon, a national Native American sorority. She serves as co-advisor of the ECU Native American Organization, the student club primarily responsible for organizing and hosting the university's annual powwow on campus.

Hunt graduated from ECU and has been employed at the university for 14 years, working as the financial advisor for the Student Government Association. Currently a graduate student, she volunteers as a student mentor. She is a member of ECU's American Indian Employee Resource Group and the University Network of Native Student Leaders. She has served on numerous committees and groups that highlight women of distinction as well as Native American art and history. She participated on the ECU Chancellor's Committee on the Status of Women and has spoken at events for the ECU Women and Gender Office.

Hunt received a 2019 Horizon Award, which honors ECU employees for their commitment to service, and was a 2019 Creed Award winner for citizenship. She was also a recipient of an ECU Forty Under 40 Leadership Award in 2017. 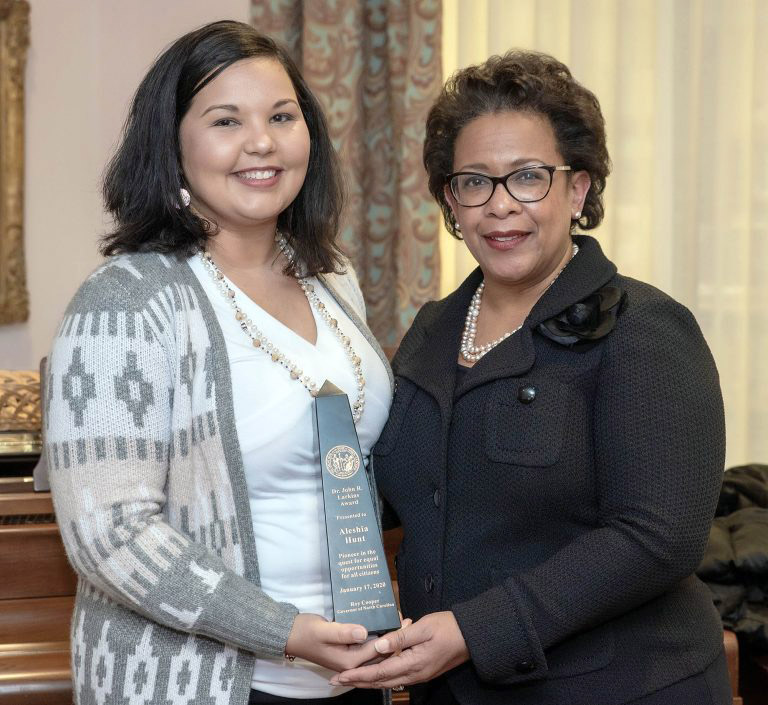 Hunt, center, holds the Larkins Award as she stands with Loretta Lynch, former U.S. attorney general.
Outside of the university, Hunt has volunteered at the American Indian Heritage Festival at the North Carolina Museum of History where she not only helped vendors and performers, but also shared information about collegiate scholarship opportunities. On a national scale, she has made presentations on creating culturally engaging institutions for Native American student success at NASPA Student Affairs Professionals in Higher Education and at the American College Personnel Association.

She said the award won't slow her down. She plans to continue her service, especially in the Native American community where she promotes educational opportunities.

"A lot of us who are Native American live in rural areas and we're not having people who look like us in the classroom and in those communities pushing us to go to college and advocating for us," Hunt said. "I want to tell those stories so we're not forgotten, and I want to help other students from diverse and underserved communities who need advocates for them in the classroom, at the university and in the community."

Hunt said Loretta Lynch, former U.S. attorney general from Greensboro and the event's featured speaker, had poignant words about service for those attending. Lynch also had some words for Hunt.

"You have set the example for all of us. ... You represent the best of our state and state employees by putting others above yourself," Lynch told Hunt during her speech.

Dr. John R. Larkins, born in Wilmington in 1913, devoted his life to improving race relations and social equity. He served state government in a number of capacities, including in the departments of public welfare and corrections, with the state probation commission and as a special assistant to the governor on minority affairs until his death in 1980.