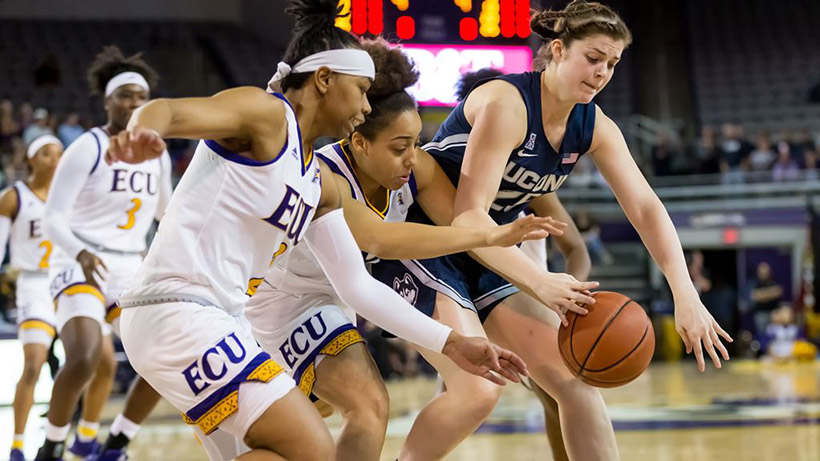 GREENVILLE, N.C.     After a tight first quarter, the ECU women's basketball team could not match the firepower of No. 3 UConn, falling 98-42 on Saturday afternoon inside Minges Coliseum.

ECU (3-16, 0-6 AAC) was led by Lashonda Monk, who finished with 17 points, three assists and five steals. Taniyah Thompson was the other Pirate to score in double-figures, adding 10 of her own. Dominique Claytor led the Pirates on the boards, grabbing nine rebounds to go with seven points and three steals.

UConn (18-1, 8-0 AAC) was led by Christyn Williams, who scored 26 points on 11-of-17 shooting. Anna Makurat provided a deep threat, shooting 8-of-10 from three for 24 points while Megan Walker finished with a double-double, scoring 15 points and hauling in 12 rebounds. The Huskies had a dominant 52-26 edge in rebounding an outscored ECU 18-2 in second chance points.

Knowing they were facing an uphill climb against the third-ranked team in the country, the Pirates gave themselves a chance with an outstanding effort in the opening quarter. UConn opened up a 6-0 lead as ECU shot 0-for-5 to start the game. But the Pirates answered by making five of their next six shots to tie the game at 11-11.

Back-to-back three-pointers from Crystal Dangerfield and Williams helped the Huskies push their advantage up to nine, at 22-13 with just two seconds remaining in the first quarter. But when Walker missed the second of two free throws, Claytor pulled down the rebound and handed it off to Monk who hit a spectacular three-quarter court shot to cut the lead to just 22-16 after one. In the opening stanza, ECU forced five UConn turnovers and scored seven points off them.

When Tiara Chambers banked in a layup on the opening possession of the second quarter, ECU was back within four points. From there though, UConn was able to shut down the Pirate offense and turn that defense into offense. ECU shot just 2-of-19 (.105) in the second quarter while transition opportunities helped the Huskies take off on a 28-3 run to close the quarter, taking a 50-21 lead at the break.

UConn's dominance continued in the third quarter. ECU made just one field goal while UConn shot 10-of-14 (.714) to push the lead to 79-26 after three quarters.

Thompson, Monk and Claytor were ECU's entire offense in the fourth quarter. Thompson went on a 6-0 run of her own, while Monk had six points of her own in the frame. In all, UConn outscored ECU 19-16 in the final frame for a final margin of 98-42.

The Pirates will be back home on Tuesday night when they welcome Memphis to Minges Coliseum. Tipoff is scheduled for 7 p.m.

Head Coach Kim McNeill     Opening Statement: "A really good team over there. Obviously UConn is a program and Geno (Auriemma) has done unbelievable things for women's basketball and their program has been so consistent. I thought we played a really good first quarter. I thought we came out, we executed, showed some energy and some fight. When we started missing layups, I thought from that point, our confidence went down and we allowed them to live in transition. There are some things we can take away from this game, that we can continue to get better at. Obviously, you want to move on and get ready for Tuesday."

On the shift in the second quarter: "One of our things we put on the board was good half court-offense leads to good transition defense. We just talked about controlling the tempo and trying to make it a fairly low scoring game because we knew if they got in the 70's, 80's, and 90's, that we would be in trouble because we are not a high-powered offense like that. Getting our offense, running it through, not taking quick shots. I thought we did a good job of that early in the game and then in the second quarter, we started with Xianna (Josephs) missing a nice little "chippy" and it just started to become a trickle-down effect. Normally when you miss layups on one end, it leads to transition on the other end for easy layups or easy three's. Obviously, when you are living in transition all night and shooting layups, it builds your confidence. They got in transition and just got on a roll."

On how the team is improving: "Obviously you wouldn't be able to tell it by tonight. If you're not around our program everyday and you're not in practice every day, you may not agree with what I'm about to say. We were getting better up to this point, and I think up until the second quarter of this game, I've seen strides in this team. I've seen us coming to practice every single day and they bring in the energy, and that's something to be proud about because when you have, and you've only won three games, kids can tank it. They can tank it with the season being over with and having to pull energy out of them in practice, but that hasn't been the case. They come in every single day bringing in the energy; executing against Tulsa, Houston, SMU, Wichita State. Those games could have gone either way. As a coaching staff, we are seeing some growth with these young ladies. I saw some in the first quarter and I thought the first quarter gave us some confidence, but I told them the game isn't ten minutes, it's forty minutes, and they only played ten minutes."

On takeaways from the game: "At this point, today is what it is. We move on, we don't talk about it anymore. Tomorrow is going to be about Memphis. As a coaching staff, we are going to bring a lot of energy, I told them I'm going to be extremely disappointed if they don't match our energy. We've still got a lot of games left to play. For us, we don't even talk about the record anymore. I don't even know what our record is, I only know we've won three, I don't even know how much we've lost. For me, it's about continuing to get better, be a better half court executing team, being able to turn those turnovers into points for us, learning how to be better in transition, stop the silly fouling, so you have to find the small victories. Those are the small victories that we are looking for."