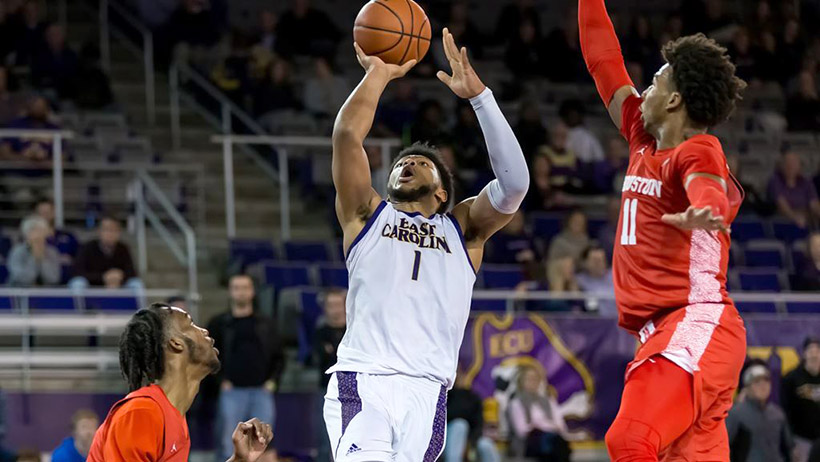 GREENVILLE, N.C. (AP)     Houston coach Kelvin Sampson had just watched his 21st-ranked Cougars grind through a road win when he ran across East Carolina's Jayden Gardner in the hallway outside his postgame news conference.

The veteran coach couldn't hold back his praise for an opponent who made things difficult on his young team, even after Houston had led by double figures much of the night in a 69-59 win.

"You've got a big heart and you're a warrior, man," Sampson told Gardner, patting him on the chest.

The Cougars (17-4, 7-1 American Athletic Conference) won for the 15th time in 17 games Wednesday night, though they struggled all night to slow the 6-foot-7 sophomore and AAC-leading scorer. Gardner finished with 29 points and 19 rebounds.

While Gardner got little help from his teammates, Houston showed some of the balance that has put it atop the AAC standings.

Houston came in with five players averaging between 9.8 and 12.9 points, then got 18 points, five rebounds and a season-high six assists from redshirt freshman Caleb Mills.

Compare that to the Pirates (9-12, 3-5). Gardner finished with one fewer point than the rest of his teammates, who made 8 of 39 shots (20.5%). And Houston made its move when the Pirates got away from feeding Gardner late in the first half after he had scored 16 points, building a 33-21 lead by the break and never letting ECU closer than eight again.

The Cougars came in shooting 41 percent in league play, including 29% from behind the arc. They didn't do anything to change those numbers Wednesday, shooting 39 percent and making 5 of 16 3-pointers. More surprising, Houston finished even on the boards (43-all) despite entering the game as the national leader in rebounding margin (10.7). Still, the Cougars beat the Pirates for the ninth straight time after entering the day tied with Tulsa atop the league standings.

"It"s a road win, it's hard to win on the road," Mills said, "but it's not the way we want to win. We want to outrebound, we want to dominate. That's not what we did tonight."

Gardner came into the day ranked 13th nationally in scoring and was averaging nearly five full points more than the AAC's No. 2 scorer (Tulane's Teshaun Hightower at 16.1 points). But Gardner's teammates did little to back him up with the Pirates having the chance to match their win total for all of last season.

"We do need to help him more," Dooley said.

And ECU showed some grit, fighting back from 21 down to within nine in the final minute.

"We're a better team, we compete, we play hard," Gardner said, adding: "We've just got to keep getting older and keep getting mature and keep going through these games."

East Carolina Head Coach Joe Dooley     Opening statement     "One of the things when you play Houston is they are not going to help you, so you have to help yourself because they don't give you anything. Some of the things we needed to do we did and some of the things we needed to do to help ourselves, we didn't. That in the first half was free throws and layups.There is no margin for error against them so when you don't do some of those things you're obviously not going to win. They have a really good team and I thought [Caleb] Mills for a little bit took over and I thought Chris Harris had a really good game. They are so balanced so they can hurt you in a lot of different ways."

On the team's offensive struggles     "I don't worry about our offense, I worry about our defense though. We worry whether it is a good open shot or not. We put a lot of pressure on our defense. And it was good number wise, in general. We need to be more balanced offensively. I think Charles gave us some good minutes tonight and he continues to get better. I think Brandon [Suggs] and Tristen [Newton] played out of foul trouble. This is all new to all of them so they aren't used to, nor should they be used to what they are seeing. They should all be sitting there watching and learning so they can teach our younger guys later what to do.

Houston Head Coach Kelvin Sampson     On Jayden Gardner     "I just love Jayden Gardner. If you could just take a stamp and put winner on him, that's what he is. He's just a winner. There's a lot of ways to evaluate rebounders, but he just has great intangibles. Guys that can't rebound, I don't care how tall you are or how high you jump, their usually not where the ball is. Wherever the ball is that's usually where Jayden Gardner is. We were the No. 1 rebounding team in the nation coming in here. We've won at Wichita State, University of South Carolina, tournament at Hawaii beating Georgia Tech, Washington; we've played against a lot of teams but, Gardner is the best player we've played against. We haven't played against anybody that is more difficult because you don't know who you need to put on him. We came in with a brilliant game plan, we threw that one out of the window saying "okay, that one wouldn't work, let's go to this", that one didn't work either. He's tough, he's a really good player. He struggles with certain things, but his heart is so big, I just love him."

Sophomore Jayden Gardner     On the Pirates' shooting and Houston's defense     "We just have to make shots at the end of the day. It happens that quick. Last game we were hot, this game we were cold. We just have to be consistent. Credit to them, they were really tough. They were long. They challenged the shots and they got after it."

On being called the best player Houston has faced by Coach Kelvin Sampson     "I just go out and play my game. (I) Just try to help my teammates, my coaches, and try to put on for where I come from and my family. I just love the game of basketball."