Parents, Not Government, Should Choose Where Their Children Attend School, New Poll Says 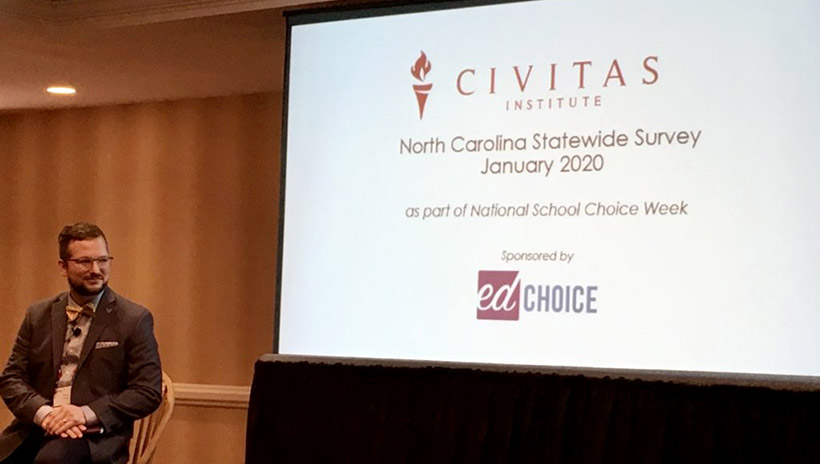 North Carolinians strongly believe parents are the ultimately authority when it comes to educating their children, a new poll from the conservative-leaning Civitas Institute shows.

Minority voices aren't always well-represented in school choice polls, said Donald Bryson, president of Civitas Institute. To address this, minorities were oversampled with 300 nonwhite voters. The margin of error for this sample is plus or minus 5.65%.

Parental control over their child's education is no longer a controversial opinion, Bryson said.

An overwhelming 81% agree that parents should have the ability to choose where their children attend school. Only 14% disagree. For the minority oversample survey, 84% agree, and 12% disagree.

Fifteen years ago, the answer would have been different, Bryson said. Today, 81% sends a strong message.

Parents, not the government, are best suited to decide where a child should attend school, 76% of respondents said. Eight percent said the government is in the best position to make that decision.

People enjoy choice in a lot of areas of their life, said Drew Catt, director of state research and special projects at EdChoice. They want choice in education, too, he added.

It's frightening that 8% of those polled think the government is best suited to decide where a child should attend school, Catt said.

"It makes me want to ask them who should choose which restaurant they go to, which grocery store they go to, and see what their response is," Catt said.

While school choice options like private and charter schools are growing, a majority of students in North Carolina still attend a traditional public school. If location and cost weren't a factor, 32% of respondents would still send their children to a traditional public school. But 23% would send their children to a religious private school, and 20% would opt for a non-religious private school.

Despite the bipartisan support for school choice, the subject is sometimes a contentious one among lawmakers.

"Gov. Roy Cooper and legislative Democrats have said they would defund the Opportunity Scholarship program and put a moratorium on new charter schools," Sen. Deanna Ballard, R-Watauga, said in a news release.

Education is a great equalizer, the Watagua senator said, and programs such as the Opportunity Scholarship give low-income families the resources to choose a school that's best for their children.

North Carolina has come a long way in providing a variety of education opportunities, Rep. Jason Saine, R-Lincoln, said during a panel discussion at the Civitas Institute's event.

"We already have proof of concept. We've had success, so we need to spread the good word," he said.

Any discussion about education should be focused on the children, Horn said, instead of a constant war between adults over the belief that if one side wins, the other side loses.

"That's not the way it works in education," Horn said. "We can both win."